This is data that should exist.

Not only does data help us understand sex and human sexuality better, it also helps us understand ourselves. After all, many of the questions we get at Kinkly are really just people asking “Is this OK?” or “Am I normal?” If the results of our survey show anything, it’s that most of the questions present a wide range of answers.

Many of the questions we get at Kinkly are really just people asking “Is this OK?” or “Am I normal?” If the results of our survey show anything, it’s that most of the questions present a wide range of answers.

Curious about other people’s self pleasure? Here are the results of our survey.

[Editor’s Note: Due to the small number of trans, agender and asexual respondents, we were not able to draw any statistically significant conclusions for these groups as we did not have an accurate representation of the population. To avoid bias, we have only drawn conclusions for men and women and by relationship status.] 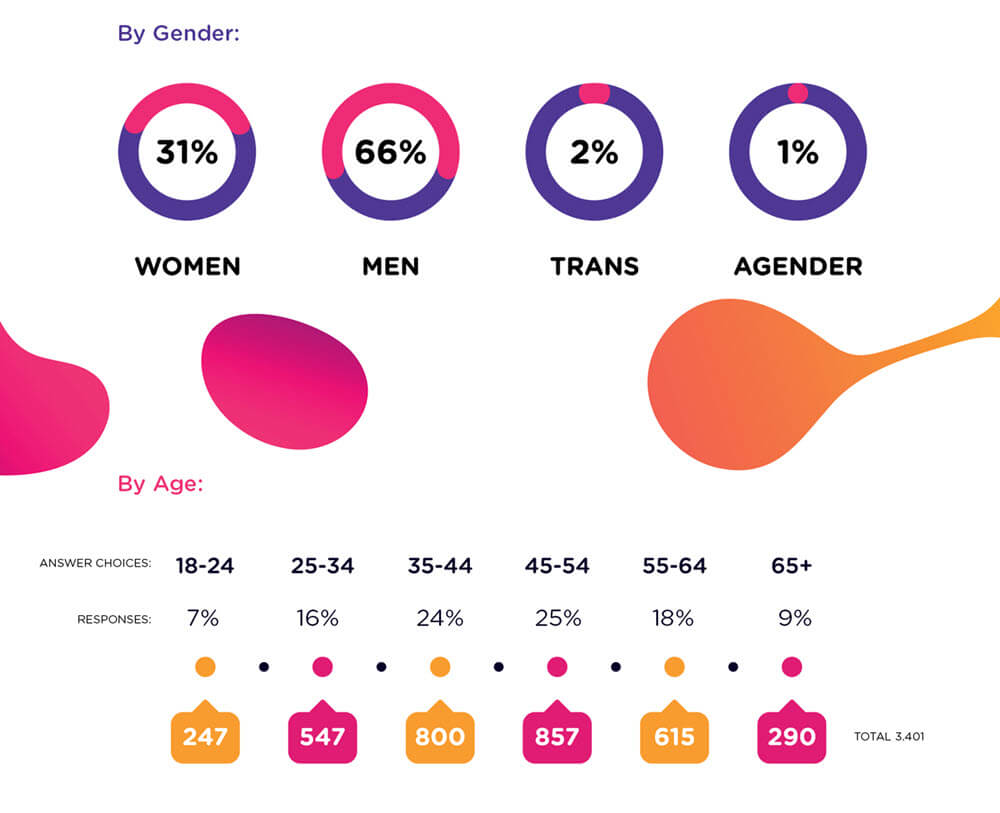 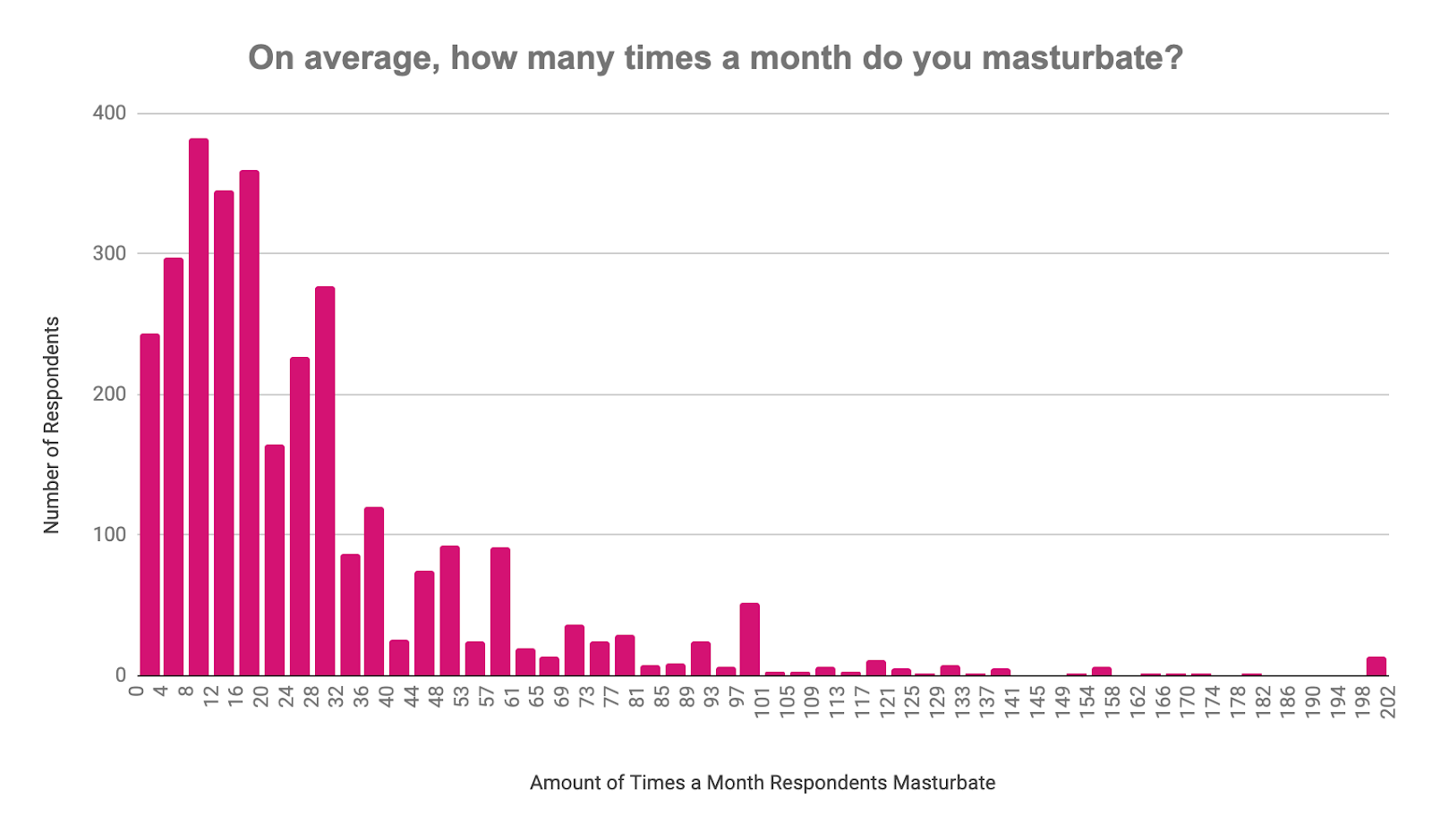 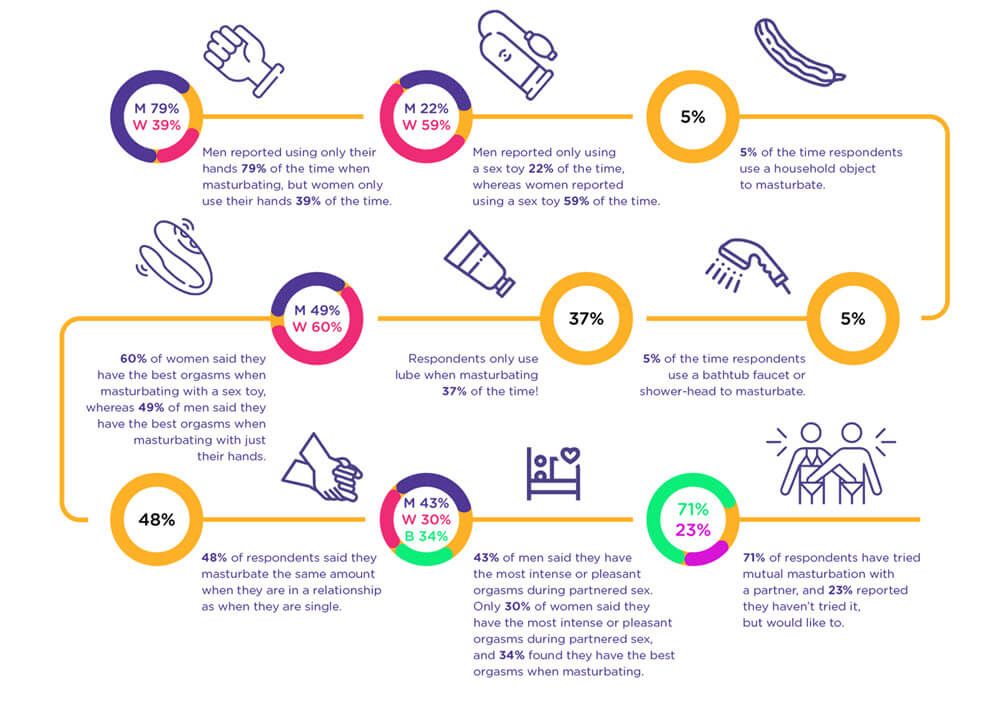 Look for toys to try? Check out our Sex Toy Reviews!

According to Aoyama, at penis sex toy manufacturer Tenga, "Over the past several years, it’s been encouraging to see sex toy usage increase across genders and sexual orientations! Generationally, we know Millennials are most likely to have used a sex toy and are most open to purchasing sex toys. In addition to millennials, our data also shows that LGBTQIA+ tend to be more open towards purchasing and using sex toys. "

"Over the past several years, it’s been encouraging to see sex toy usage increase across genders and sexual orientations!"

This difference could potentially be due to the fact that sex toys are much more widely available and mainstream today than they were when older generations were younger. As such, younger generations may be much more open to incorporating sex toys into their self-pleasure. (At least we hope that’s the case!)

PR firm BCW, whose clients include sex toy brands, speculate, "The reason why Millennials are more open to the idea of using sex toys compared to Gen X might be correlated to the fact that they grew up in a time when society started to slowly shift it's concept of sexuality from something that is shady and shameful to something than can be pleasurable and fun. The way mainstream media – most notably TV shows such as "Sex and the City" – treated and showed sexuality played a big role in further opening the conversation. In addition, the development of online sales channels such as Amazon made sex toys much more accessible, which also helped sex toys to become 'more mainstream'."

When We Have the Best Orgasms

“Many cisgender men are used to using only their hands in solo play and may see sex toys as an unnecessary addition. Cis men who do try them often report enjoying the experience and different sensations they produce,” McGuire said.

“Many cisgender men are used to using only their hands in solo-play and may see sex toys as an unnecessary addition."

“You have to learn to please yourself; it helps to learn how to please someone else.”

“It helps you to know what orgasms is and how you can pleasure yourself so you can communicate this to your partner and reduce the overwhelming feeling for the partner in terms of pleasing you.”

“I found pushing my limits sexually was easier on my own. No explanation or shame required. Also was afraid to scare people. As a mature adult, I now have a partner that enjoys and accepts my sexual self expression.“

Surveys
Faking It: Our Readers' Survey Reveals Some of the Reasons Behind Why We Do It
by KINKLY STAFF

“It's for your own happiness and a great stress reliever.”

“It’s self care because you’re loving yourself.”

“It's natural and there is nothing wrong with it. Your body is beautiful and sexy. You need to love yourself for exactly who you are. You need to take care of yourself.”

“It's ‘real sex’ in itself. Even when you're playing with partner(s).”

“When you have the urge you should be able to have the pleasure.”

“I think it helps the partner to see exactly what works the best for you. You both learn if you're paying attention. Makes for better partnered sex.”

“Rarely do sexual appetites align perfectly in a relationship, but it would be a shame to lose a great relationship over the number of orgasms one has together.”

“Body awareness and confidence go a long way in the bedroom. It’s about pleasure and how we get it. I imagine that anyone would like to be told what makes their partner feel good.”

“It’s important to continue to have “me time” even in a relationship. It’s a time to connect with myself and continue to explore new things. My orgasms shouldn’t be solely dependent on partnered sex

A Visual Look at the Data

Surveys
Faking It: Our Readers' Survey Reveals Some of the Reasons Behind Why We Do It
by KINKLY STAFF