by TARA STRUYK
Published: MARCH 27, 2019 | Updated: OCTOBER 21, 2020 04:55:45
What started as a medical treatment for women’s "hysteria" has become both an industry and a new paradigm - one where female sexuality isn't such a dirty word.

It sounds like a joke, but this was hardly the first time a bomb squad had been called to investigate a package that turned out to have much less explosive - but apparently still newsworthy - contents.

But maybe we shouldn’t be surprised. Vibrators are experiencing a bit of an explosion of their own these days. Once relegated to shuttered, back alley sex shops, they've officially found their way into retail stores, pharmacies, lingerie shops and even high-end electronics outlets. Or, more precisely, they’re finding their way back there after a long reprieve. This isn’t the first time people could pick up a sex toy easily and with little embarrassment. But, boy, has it been a long time.

Orgasm: Just What the Doctor Ordered

When you look at today’s sleek, sophisticated vibrating toys, it’s hard to imagine the whole industry started with steam-powered "massage machines." Sure, they were as big as a dining room table and someone had to shovel coal into them from another room, but they provided huge relief for doctors who’d been providing manual (yes, you read that right) stimulation to their female patients - something many of them said took at least an hour to complete.

Now, if you’re wondering why Victorian-era doctors were providing happy endings to women, this is where things get even more interesting - and it’s exactly how vibrators managed to progress for years as personal massagers used for female health and wellness. Because while doctors - and probably everyone else - were well aware of how women used them, they didn’t believe their patients’ reaction to the treatment was at all sexual. (Or at least that’s their story and they’re sticking to it!) In fact, vibration, or "pelvic massage," was considered a valid form of treatment for "hysteria," a female malady that is no longer recognized. In any case, the "hysterical paroxysm" the vibrating treatment produced was believed to provide relief from many symptoms, which ranged from insomnia to nervousness. What was clear is vibrators made women feel better, and they often returned for more treatment. 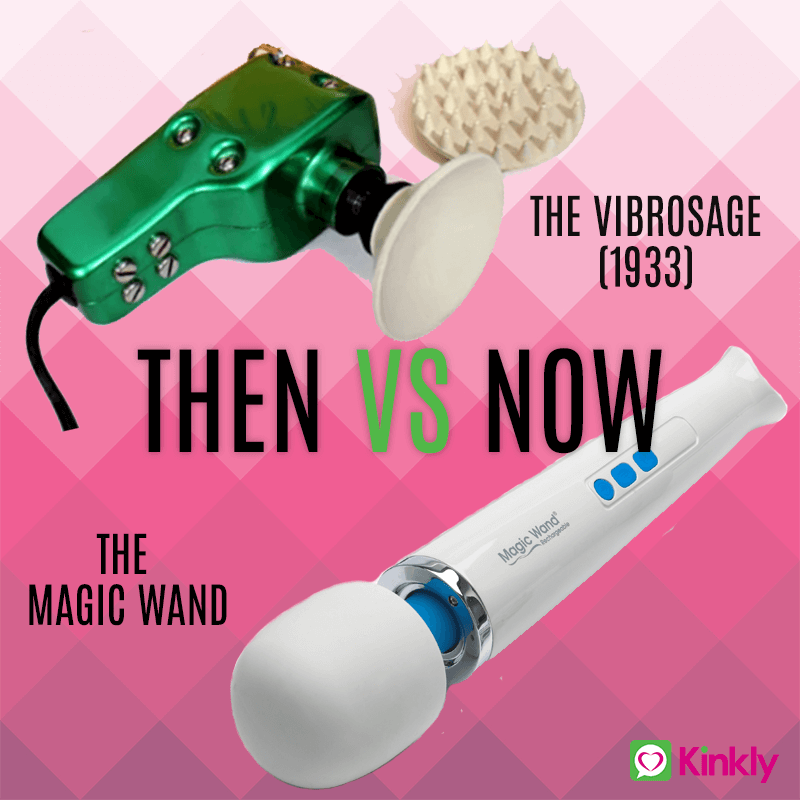 And maybe that’s how it should’ve been; people buying something they enjoyed in the comfort of their homes without hassle or embarrassment. But, although it started that way, it didn’t end that way.

We have to imagine that women must have had some inkling that their massaging exploits were of a sexual nature - and perhaps their husbands did as well. The problem was keeping that little secret under wraps, because if there’s anything the world wasn’t ready for in the early 1900s, it was female sexuality - especially the kind that didn’t involve a man.

When vibrators appeared in pornography in the 1920s or so, the jig was up, and "personal massagers," which up to that point could be purchased anywhere by anyone, disappeared from store shelves. By the time the Great Depression came around, sales of all electrical appliances dropped, and the metal used to make them was diverted for use in World War II.

Things were pretty quiet on the vibrator front for a while - quiet, maybe, but business was ... buzzing ... all the same. There’s some evidence that electric toothbrush sales increased in response to the removal of vibrators from the market, to the point where some doctors were left wondering if vibration itself had health-inducing qualities. So, in the 1950s, a whole lot of other vibrating products began being marketed to women as "massagers" or "spot reducers." These handheld massagers were advertised for weight loss, increased energy and a better, more youthful appearance. Based on the wide range of models and manufacturers that made these items, they were big sellers. And the best part was, women could buy them without reproach, and use them, as one ad said, "in the privacy of their own homes."

By the 1980s, vibrators were flying off the shelves once again. But there was still one more shake-up for this old favorite.

Whatever "Fifty Shades" tapped into, it started a marketing mania, one with many new toys that are putting function ahead of, well, form. They're sleek, often beautiful, devices - buzzworthy baubles rather than crude anatomical copies. In fact, they're a lot more like the approachable, everyday devices women purchased in the early part of the century. And, perhaps thanks in part to pioneers like "Sex in the City" and "Fifty Shades," people increasingly feel comfortable buying, owning and even talking about them.

More Buzz Than Ever

What started as a medical treatment for women’s "hysteria" has become both an industry and a new paradigm - one where female sexuality isn’t such a dirty word. That shift has made vibrators and other sex toys bigger than ever.