by ANNA LYNN
Published: SEPTEMBER 13, 2018 | Updated: MARCH 11, 2022 01:31:28
Presented by LELO
The LELO Smart Wand is, in many ways, a traditional wand massager; it’s a large, powerful, purpose-built orgasm tool. But it's also much more refined than many others.

When you arrive home from work to find that a new sex toy has arrived and the house is empty, the obvious choice to make is to tear the package open, fire it up and have an orgasm. If that toy is the LELO Smart Wand Large you can do that with your pants on within a minute or two. Since 5:30 p.m. on a Wednesday isn’t usually a particularly exciting time for me, it was a highlight of an otherwise average day.

The LELO Smart Wand is, in many ways, a traditional wand massager; it’s a large, powerful, purpose-built orgasm tool. But it's also much more refined than other wands I've used. And, while I won’t be throwing out my Magic Wand anytime soon, this wand has definitely upped the ante.

Read: All the Power! Top Wand Vibrators to Try

But while some wands go from oooooh to genital erasure in a button click, the LELO Smart Wand provides a very slow buildup. Like, you have to click a full 10 times (I think) to get to the highest setting. I know this doesn't sound like much, so you'll just have to trust me when I tell you that this a very good feature; if you need the top level, it’s there for you, but you can subtly shift your way up there without having to worry about sending your sensitive bits into a state of vibrational shock. And the way the Smart Wand shifts from level to level is just so … smooth. It feels like shifting gears in a really nice car. Plus, no matter how high you go, the vibrations stay smooth and rumbly – they never get buzzy or irritating. 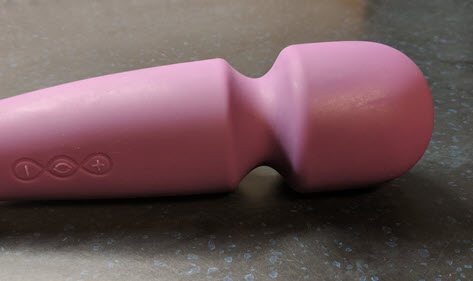 Look at the size of that head! The smooth silicone coating is a treat too.

The Smart Wand is also rechargeable but – and this is important y'all – it also works when it’s plugged in. What I’m saying is that it’ll never leave you hanging, whether you’ve remembered to charge it or not.

The LELO Smart Wand also has eight separate vibration patterns. I’m not a patterns person myself, but it’s a nice option for those who like to mix things up. Plus, the controls are super simple, which means less fiddling around there. Less frustration means a faster route to orgasm - at least for me.

Three buttons, y'all. It doesn't get much simpler than that.

There are a lot of adjectives that tend to go along with traditional wand vibrators. Loud. Clunky. Cumbersome. (Not that they’re all negative. You can also add powerful, orgasmic and mind-blowing to that list!) The Smart Wand, however, has upped the ante on a few key areas of the wand that were, shall we say, less than orgasmic.

First, the Smart Wand is coated head to toe in body-safe silicone. This makes it not only feel smooth and beautiful, it also makes it super easy to clean. It’s also fully waterproof, so you can just soap it up, run it right under the tap and it’ll be good as new.

Second, this vibe is quiet. In fact, for its size and power, it is really quiet. You can definitely use this one behind a closed door without anyone being the wiser – nevermind your neighbor thinking you’re running a buzz-saw. Loud vibes can be fun and make you feel pretty badass, but it's nice to have a more discreet option.

Another note on discretion: the storage bag for this toy is a marked departure from the typical "sexy" drawstring bag that comes with a lot of toys. It's black, padded storage envelope that's cute(ish) but subtle enough to leave anywhere. 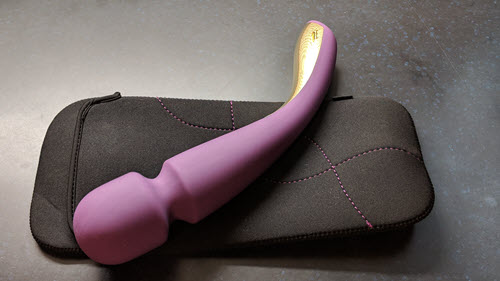 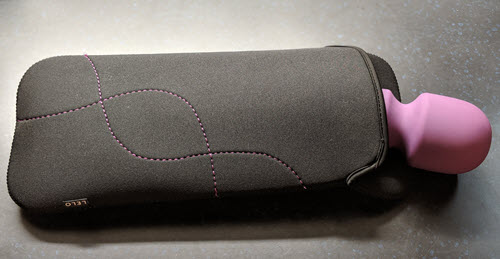 All tucked in. There's a flap to cover the head as well ... but it looks kinda cute poking out like this!

Finally, the curved handle thing really got me. I mean, it seems so simple, but it actually makes a huge difference in how comfortable this toy is to hold. The way it naturally curves toward my body when I'm holding it makes it easier for me to change the angle or apply some pressure without having to bend my wrists in an uncomfortable way. Interestingly, the fact that it was less awkward to hold also made me feel sexier holding it.

I want to talk about the orgasms because, well, I assume that’s what most of you buy sex toys for. Although LELO's Smart Wand is powerful, the vibrations are ... different. They seem to penetrate really deeply compared to other powerful vibes I've tried. There is virtually no buzz here - no matter how high you turn this toy up - and the result, at least for me, is a really deep, powerful orgasm, one that bubbles up fairly slowly and grows in strength as it progresses. I think it comes down to the quality of the motor in this vibrator, as well as the ability to scale up the power level so incrementally. Those who like wands will likely enjoy the subtle way this vibe’s power creeps up on you, but it may also appeal to those who find wands to be a bit too powerful in general, because it offers some much gentler settings than most other wands of this size.

Overall, I really adored this toy and I’m so glad to have it in my collection. It’s beautiful, it’s powerful and it looks and feels like something that will last for a very long time. As for Wednesday nights at 5:30? Oh, it's on.