The Goody-Goody Girl Who Co-Founded a Sex Toy Company

I grew up in a very conservative household. Any discussion of sex centered on its sinfulness outside of marriage. I indulged in books like "I Kissed Dating Goodbye," in which I was encouraged to court instead of date, saving even kissing for marriage. In my quest to live up to my community's ideals, I locked my sexuality away in a dark corner of my mind. But suppressed urges refuse to remain masked forever. At 23 years old, I finally began letting go of my prudish past and got to know my body. And guess what? I had my first orgasm!

Solo play was thrilling. Adding a partner complicated matters. I was ashamed when I couldn’t orgasm during sex. Although my partner was wonderfully reassuring, I was mortified by the length of time it took me to become aroused enough to get off. Of course, all my worrying seriously exacerbated the situation. If only I knew then what I know now: Most women don’t orgasm from penetration alone, and it takes the average woman about 20 minutes to climax.

The First Toy to Revolutionized My Sex Life

One night, my amazing partner took me to a sex toy store and introduced me to the world of sex toys. I picked out an unthreatening white and blue massager called the AcuVibe, which I learned was inspired by the infamous Hitachi Magic Wand. The wand revolutionized my sex life. The strength and consistency of vibration worked wonders on my clit, and I gained the power to climax fast or slow using the wand. Embarrassment and shame receded and intimacy with my partner increased.

As I explored my sexuality, I became kinkier. I bought more toys including We-Vibe’s little Touch vibrator. The more delicate vibration didn’t work as fast, but reaching my orgasmic goal speedily had stopped mattering as much as the pleasure of the process. I started experimenting with Tantra - keeping myself at the brink of orgasm for as long as possible to increase intensity - and multiple orgasms, but I noticed a dismaying phenomenon: Both the AcuVibe and the Touch began to numb my clit and irritate the surrounding skin after 15-20 minutes of contact, requiring me to pause play. If I didn’t stop, it would become harder to feel anything, and my arousal would decrease. The numbness increased my time to orgasm, and my old fears threatened to overwhelm my newfound enjoyment.

The Second Toy to Revolutionized My Sex Life

That’s about the time I tried the prototype of an experimental, gyrating sex toy called the X1 Orgasmatron. My friend, Doctor X. Treme, asked me if I would be interested in partnering with him in Orgasmatronics Inc to bring the X1 to market. I loved the idea of working for a start-up company (especially one focused on sex toys and pleasure!), but before I could commit, I had to make sure I loved the product.

Doctor X. Treme explained to me that the gyrating motion of the X1 stimulates not only the exterior clit that we are the most familiar with, but also the parts hidden inside. As it turns out, the external clit is just the tip of an impressive clitoral iceberg, part of a vast structure of nerves that extends up into the pelvic region. Sex ed AND a mind blowing orgasm? I was sold.

Since co-founding Orgasmatronics, I’ve had the pleasure of talking with many woman about how they orgasm. The diversity is impressive. Some women have told me they orgasm multiple times with the feather light touch of a tiny bullet vibe, while several others need to buy two wands so that when one burns out from intense play they aren’t left unsatisfied. Some women are left cold by every toy they try and others have shared stories of reaching orgasm for the first time when they finally discover sex toys.

I love that there are as many paths to orgasm as there are people, and that there are so many fun sex toys to bring along for the ride. And I love that my job allows me the opportunity to educate other women about their bodies and the joy of sex toys. I also hope I can save them some of the anxiety and frustration I experienced early in life. 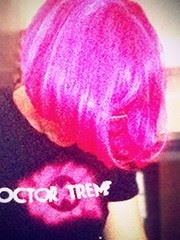 Alexandra Ars
Alexandra Ars manages the brand, designs the Web and brews the tea for Orgasmatronics, Inc. She co-founded the company with Doctor X. Treme. Alexandra used to work as a designer for a jewelry company, several bands and, for a little while, Mozilla. But when Dr. X. elucidated his vision of a queer sex toy company while they waded in a freezing river, she knew she had to help make the dream a reality. She is a kinky, polyamorous, bespectacled drummer. She believes socks and scarves are the sexiest items of clothing especially when worn exclusively.