Why Finding Vibrators in Regular Retail Stores Is a Big Deal

I didn’t walk out with a new toy, but the display did make an impression on me. All of sudden, a sex toy I’d heard about and thought about was right here in a place I shopped every week. In other words, it was right within my reach.

Over the last few years, vibrators and other sex toys have been popping up in all kinds of places. You can now buy a whole range of vibrators at places like Walgreens or Target or Walmart. You know, like, “regular” places. Places where you can also buy everyday items like toothpaste and toilet paper and baby food (because if anyone needs an extra orgasm or two, it’s a new mom.)

“Letting customers know (without saying so) that sex toys are as common (and as necessary) as toilet paper, paper plates, and a new pair of shoes is a good thing. It means that some (not all, of course) of the stigma has been removed,” says Kayla Lords, sexpert for JackandJillAdult.com.

However, she notes that mainstream retailers have very limited options, which means some consumers may not find something that works for them.

That said, options are expanding here. The plusOne range of premium devices made the news in April when it appeared in Target stores with a line of high-quality, body-safe silicone toys. These products have a lot of the features we expect from high-end sex toys, including being fully waterproof and USB rechargeable.

We Love Sex Shops But …

Don’t get us wrong; we love dedicated sex shops. In addition to a curated selection of sex toys, the best ones provide educated staff and even workshops and events to help people explore their interests in a way that is safe. Sex shops hold an important place in many communities, and over the years, they've done a lot of heavy lifting in terms of making sex toys friendlier and more accessible.

Plus, depending on where you live, a high-quality sex shop (or any sex shop, really) might be hard to come by. And if there’s one thing we know for sure it’s that sex toys – and the pleasure they provide – should be accessible. Putting sex toys in retail stores can help put them in the hands of people that might not see a real, live sex toys anywhere else. That is a powerful thing, particularly in areas that don’t have much in the way of a sex positive community or sex education.

If you look at the history of sex toys’ entry into mainstream brick-and-mortar stores, it’s clear that moving toward a more sex-comfortable society is, well, a process. Condom makers Trojan and Durex may have been the first ones to get a foot in the door, often with vibrating cock rings. Because these were considered toys for partnered heterosexual sex, they passed muster, and managed not to offend more conservative customers. Plus, these products weren't exactly premium. They weren't waterproof, they ran on batteries, and they were often made for a single use. In other words, despite being a sign of progress, they were more novelty items than real sex toys.

But, as the years progressed and sex toys increasingly made appearances in mainstream media, the offerings expanded. After all, retailers knew that people were already buying sex toys – lots of them – they were just doing it online, often on Amazon. And while Amazon also lends a certain air of normalcy to sex toy purchases, it’s also a minefield of low-quality toys made of questionable (and even dangerous) materials.

Last year, plusOne vibrators began being stocked at Walmart, a retailer known for its overall conservatism. (The line is also available at Target and on Amazon.) The products are inexpensive, waterproof and body safe. And, while they include a cock ring for couples’ play, they also offer a G-spot vibe, rabbit and bullet. In other words, it’s a basic line with they key types of toys many newbies seek out. Because they are designed for the mass market, the branding and aesthetic is decidedly approachable, inviting anyone to explore the brand. 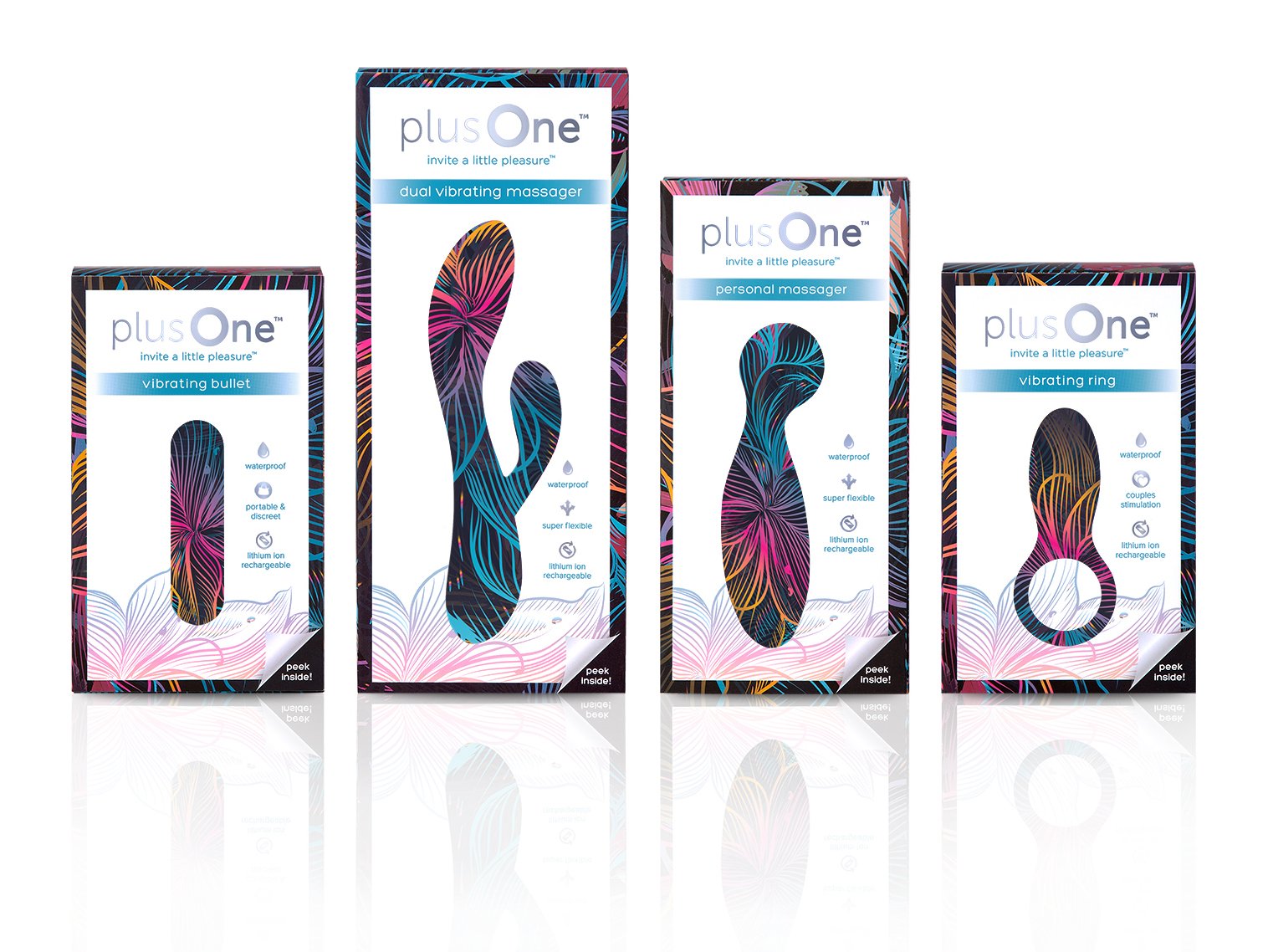 The plusOne line is designed to be approachable for newbies.

What It Means When Sex Toys Are Stocked With Other Stuff

As an increasing number of regular retail stores stock sex toys – and people inevitably buy them – more entries into the market are soon to follow. And while the selection of toys at a drug store will never rival the amazing wall of toys you’ll see at a quality sex shop, a little display in a retail setting has tremendous power. For me, seeing a sex toy in a mainstream store changed the way I felt about sex toys – and who could or should own them. It made me feel like wanting one might just be OK and that buying one wouldn’t have to involve going too far out of my comfort zone.

“I think as a whole, this move have been a long time in the making,” said Danny Garret of The Enhanced Male. “These chain stores are opening the eyes of many Americans who may have otherwise been turned off by the negative connotation of having to visit a sex shop or the negativity that may have surrounded sex toys as a whole previously. People are realizing that it is OK to shop and own sex toys, it is healthy and creates happiness.”

Although most people I spoke to agreed that there are positives to seeing sex toys go mainstream, they also feared what it would mean for dedicated sex shops. And, while more competition isn’t always seen as a positive thing for business, we have a hunch that this may be a case where a rising tide might just lift all boats. According to the surveys that have been done around sex toy ownership, somewhere around 50% of people are currently own a sex toy. That leaves a lot of potential customers (and orgasms!) on the table.

And, as anyone who’s ever bought one sex toy can attest, once they realize what a sex toy can do for them, it won't be long before they're out seeking another toy and a new experience. Only this time, they'll be a little wiser, a little more confident in their sexuality and a little less embarrassed about satisfying their desires.