Reviewed by Mistress Kay
on March 29, 2021
Petite but powerful, the We-Vibe Tango X packs a punch of pleasure!
Table of Contents

Normally, the trade-off with bullet vibrators is the power. With the small size comes smaller motors - which means softer vibrations. While that's still the case with the We-Vibe Tango X (it isn't going to be as strong as a Magic Wand, for example), it isn't nearly as much of a difference as you'd think. The powerful motor inside the Tango X really opens a whole lot of doors - to the point that it's noticeably more powerful than some of my full-sized, 7" or 8" vibrators - especially the battery-powered ones.

And "pretty much anything" is what I do with it. It can go from intercourse to slipping into a pocket. I can tug it along to go out in public - and it can easily hide at my computer desk for easy use.

While the pandemic has really limited my ability to do this yet, I'm 100% sure the We-Vibe Tango X is going to become my love as soon as kink events start back up. It's so small that I can easily pack it into any toy bag without any extra weight - and since it's entirely rechargeable, I don't have to add batteries to my packing list either. Once I'm at the event, it's so versatile that it could really be used for pretty much anything. I can press it up against the base of a dildo during a scene, I can easily use it on myself (or someone else) and sterilize it later, I can slip it between my legs and use my thighs to hold it there while my hands are otherwise occupied for my own bit of pleasure, or I can use it on a penis - or even on nipples. It can pretty much go anywhere I want it to - which is what makes it so fantastic!

Finally, the We-Vibe Tango X makes a fantastic travel vibe. Whether you're heading on a work trip or out to your families, the travel lock functionality, small size, and quiet vibrations make the Tango X a really nice travel vibe. It doesn't add much weight and can charge on any standard USB port.

In addition, if you're someone who tends to hit up the bars - or anywhere you might end up with a casual encounter, the We-Vibe Tango X is fantastic there too. It's even small enough to fit into the smallest of pants pockets with no issue and easily fits into a purse. Its small, non-realistic size isn't likely to be particularly "threatening" - even to complete strangers - but it puts out enough vibrations to really add a lot of pleasure.

The We-Vibe Tango X has a deep, rumbly vibration that puts most bullet vibrators to shame. Seriously, it's a deep, strong vibration that's amazing. Putting the We-Vibe Tango and We-Vibe Tango X next to one another, it's honestly hard to tell the difference between the vibrations. The We-Vibe Tango X feels a bit deeper and more under-the-skin, but I did a blindfolded test on both partners, and the consensus was that I was cheating and only using the same vibrator over and over. So while We-Vibe claims a power increase, I really can't see one, it certainly isn't easily noticeable.

Somehow, most of the We-Vibe sex toys end up being some of the quietest vibrators out there. I have yet to figure out why, but I know the We-Vibe Nova 2 is still one of the quietest AND powerful vibrators I've ever used. (Remember my We-Vibe Nova 2 review?) It's easy to be quiet if you have the motor of a feather, but We-Vibe sex toys usually pack some great power - and some pretty quiet vibrations too. 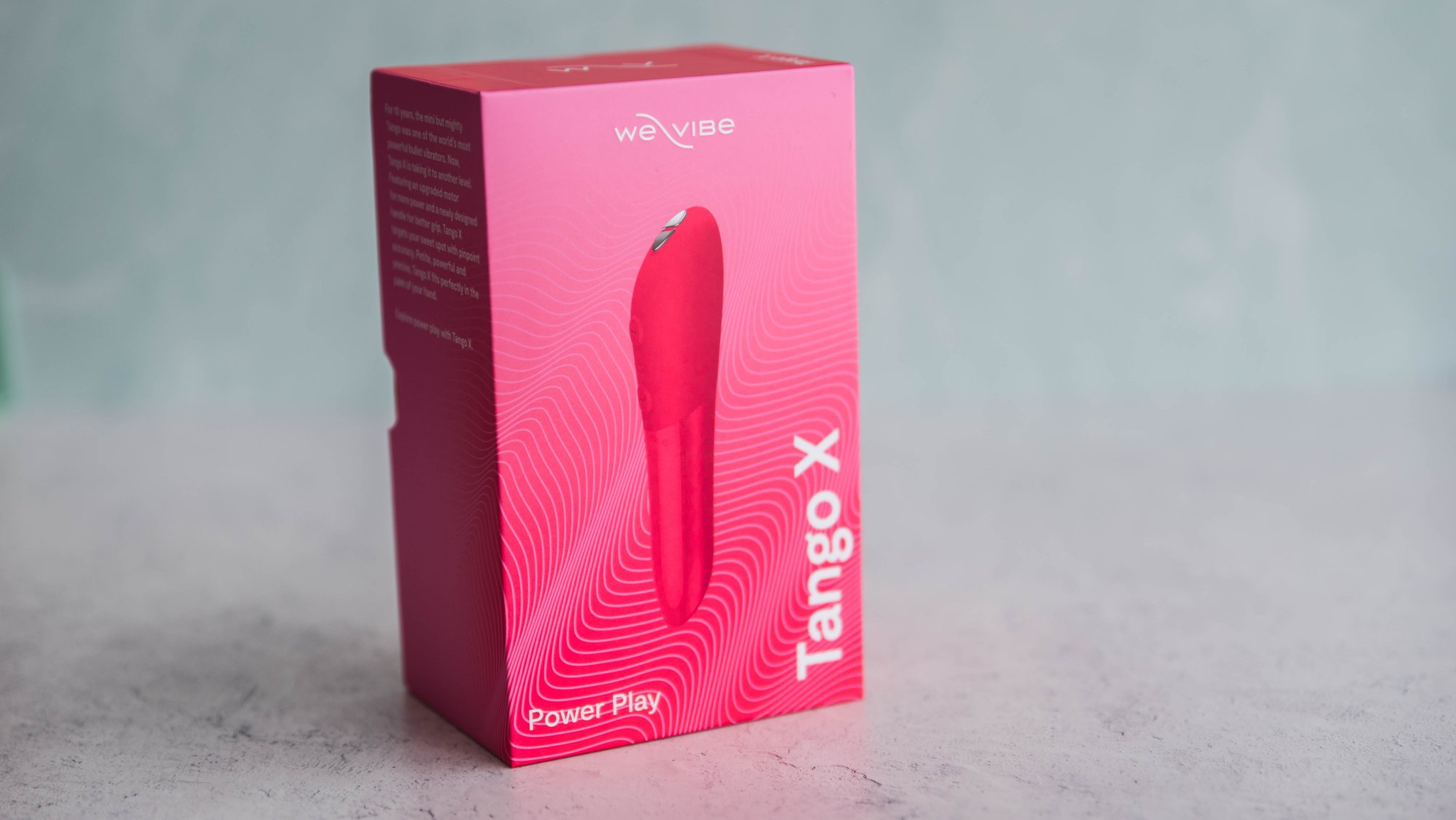 The three-button design of the We-Vibe Tango X means this bullet vibe is extremely easy to use - and it's much easier to get to your desired vibration level and pattern compared to other single-button vibrators out there. The three included buttons are easily recognizable from common symbols we're all used to: +, -, and ~. The Plus and Minus increase and decrease intensity through the 8 equipped intensity levels while the Tilde functions as the control for the patterns. 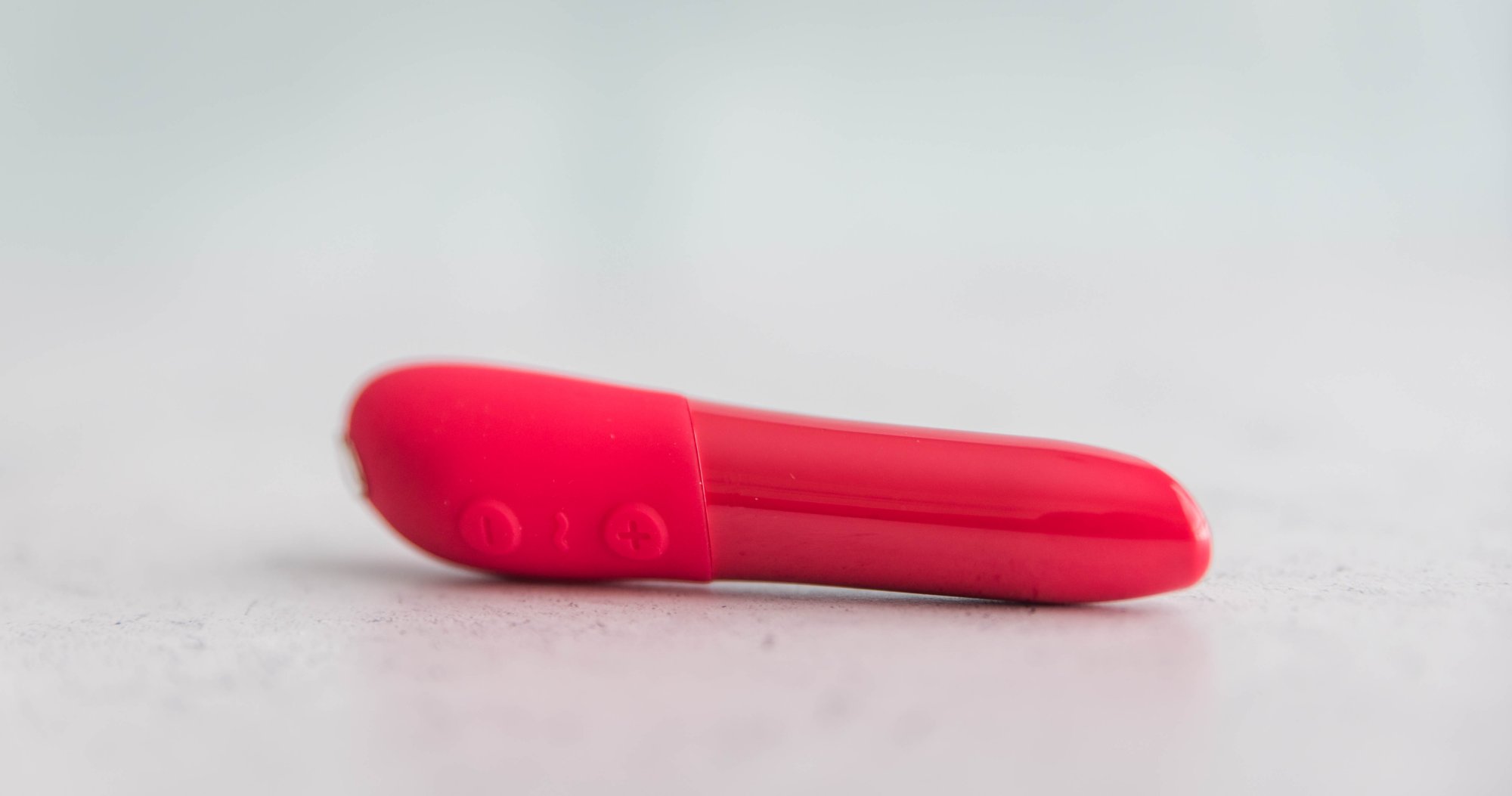 Unlike the majority of We-Vibe's line, the We-Vibe Tango X is NOT compatible with the company's free wireless phone app. While the original Tango's lack of app compatibility made sense - since it was released when the app control wasn't a huge thing - the fact that this brand-new release from We-Vibe doesn't feature the app compatibility is a bit weird - considering virtually every other toy in their line-up does. I wonder if it bumped the price too high - or the wireless chip wasn't small enough to fit into the toy without sacrificing power or something else. Either way, it was not designed to work with the We-Vibe WeConnect app. 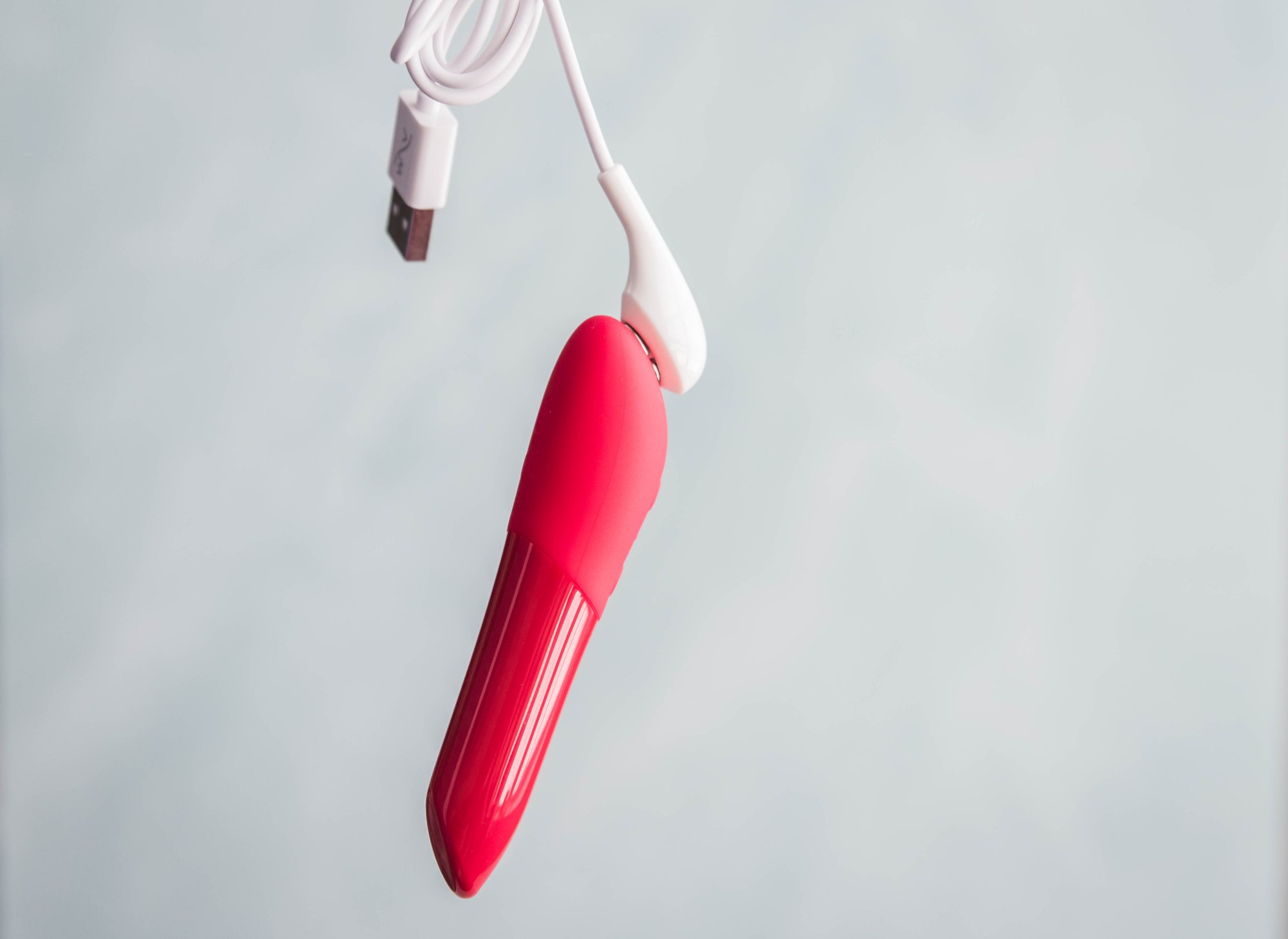 Like most We-Vibe sex toys, the We-Vibe Tango X comes with a 2-year manufacturer's warranty. It covers any manufacturing defects - but doesn't cover normal wear and tear of parts, personal preferences, damages caused by misuse/abuse/negligent handling, or any toys that have been tampered with. In order to claim the warranty with We-Vibe, you'll need proof of purchase, the purchase date, the purchase location, the defect description, and the product's serial number. (So, make sure to keep your emailed receipt from Kinkly Shop for the majority of the necessary info - and take a picture of the serial number on the box before you recycle/toss the box! You should make that a habit for any electronic device nowadays.)

The We-Vibe Tango X comes in a sturdy cardboard box reminiscent of all We-Vibe products. You slide off the top cover of the box (which isn't easy to do, so it doesn't come off with the slightest breeze) to display the We-Vibe Tango X in all of its glory sitting in the made-for-it plastic tray.

Underneath this plastic tray, you'll find the rest of the items included with the We-Vibe Tango X: the drawstring storage bag, the charging cable, a sample-size of Pjur lubricant, and the instruction manual. 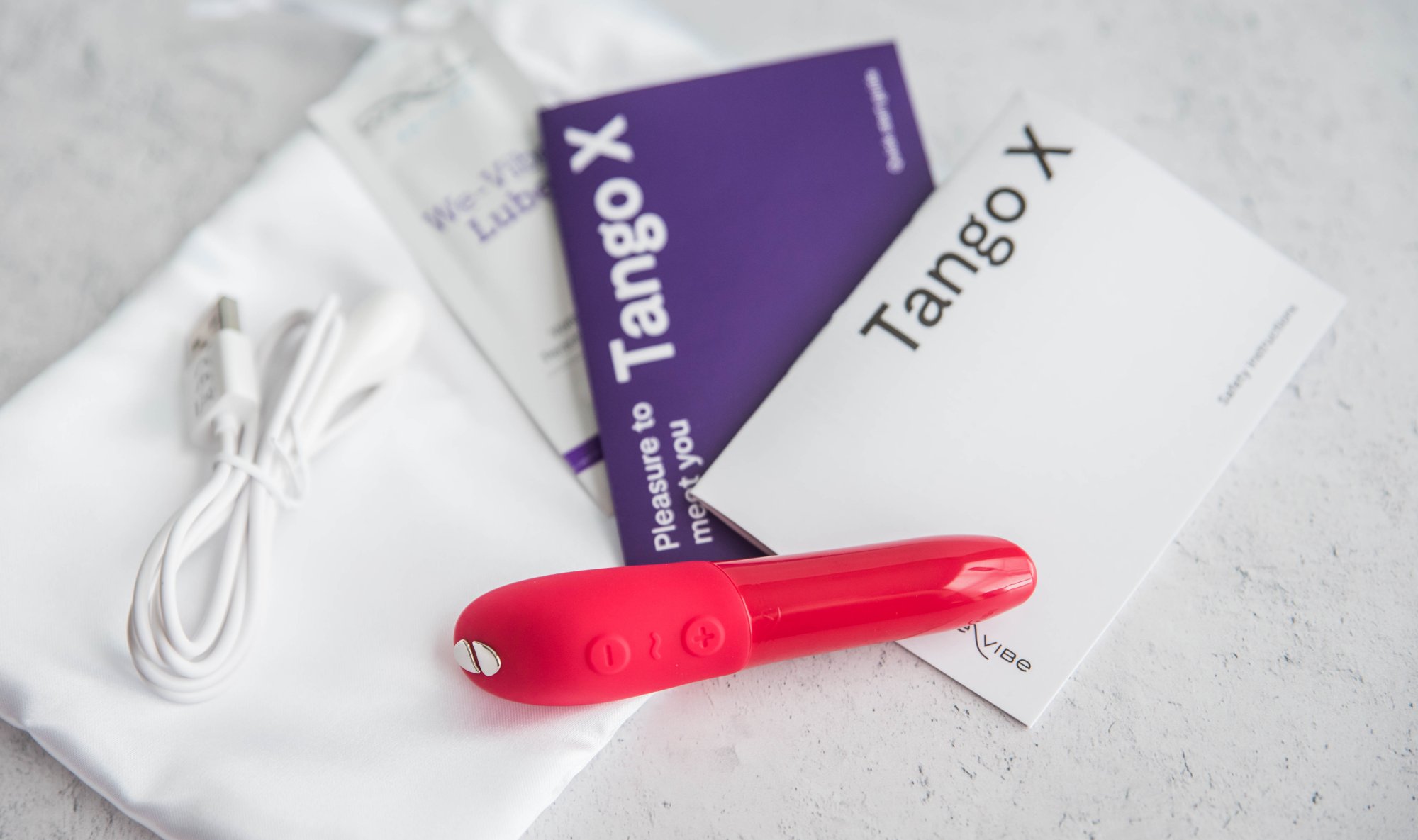 Compared to the We-Vibe Tango

However, the We-Vibe Tango original might be the winner out of the two if you're looking to use it as an additional "bonus" to your favorite toys - like in a strap on harness or inserted into the base of your favorite dildo. You'll want to do some actual measurements here. The added power and easier-to-use control structure is definitely an upgrade for the We-Vibe Tango X, but you'll need to make sure that the Tango X's 1-inch longer length isn't a problem for the item you're looking to insert it into. Having that extra length sticking out can be really annoying.

The thicker, silicone base makes it much easier to hold, and it reduces the vibration transfer to the fingers while holding it. The three-button control structure makes it a lot easier to flip through the vibration patterns; you can get exactly what you want much faster. To top it off, the updated charging port and charging cable design makes charging much easier. 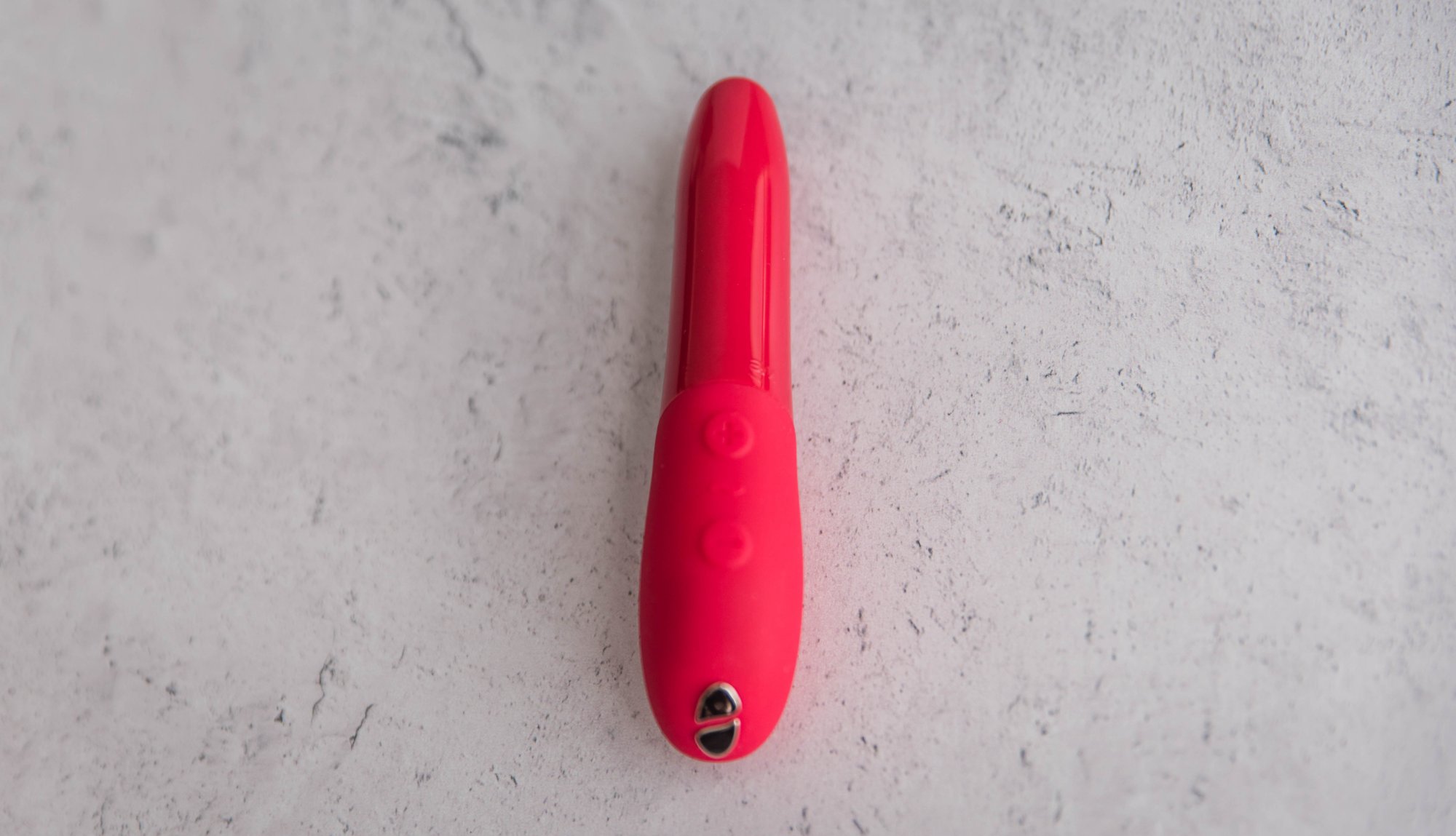 If you want a bullet vibe with a tip that is flatter, you might want to look into the Dame Kip. It also gets quite a few positive nods from sex toy reviewers for its power and easy-to-use design - and the super-flat tip is even more pronounced than the tip of the We-Vibe Tango X.