I own over 500 butt plugs. I'm not saying this to brag (but c'mon, what a great way to catch your attention), but I'm saying it because it's important to this next sentence: I've never seen anything like the XR Thump-It! Thumping Plug. Not. Even. Once.

When I turned on the Thump-It!, I quite literally shrieked, dropped it, held it like a foreign object, and then ran across the house to show my partner. And then came the video chats to show it off to friends like a new toy for Christmas.

As someone who gets a new sex toys pretty often, this is not a regular occurrence, and again, this just shows how absolutely amazing - and unique! - the Thump-It! Plug really is.

[The Thump-It! Thumping Plug is also currently 15% off in the Kinkly Shop! Use the code SPLOOSH at checkout!]

So, Describe It For Me?

Words don't necessarily do it justice. And as I learned on my video calls, video definitely doesn't do it justice either (unfortunately!). It's hard to specifically show exactly how the Thump-It! moves - though the company's official promotional material does the best job I've seen so far. (My own attempts have been lackluster, and I've been thinking up new ways to no success yet.)

The best I can give you: instead of vibrating, the Thump-It! quite literally "thumps". It's like small, micro-thrusts. When set on the ground, it effectively bounces up and down instead of shaking from side to side.

It's a momentum you can definitely see and feel. When holding it in your hand, it feels like the Thump-It! is trying to bounce its way out. With a firm grasp, it will literally move your hand for you - back and forth - if you let it.

And how does it do that? The Thump-It! features a hollow interior chamber (you can't see it!). Inside this chamber, there's a weighted ball. The Thump-It! design forcefully shoves this weighted ball across the entirety of the chamber. 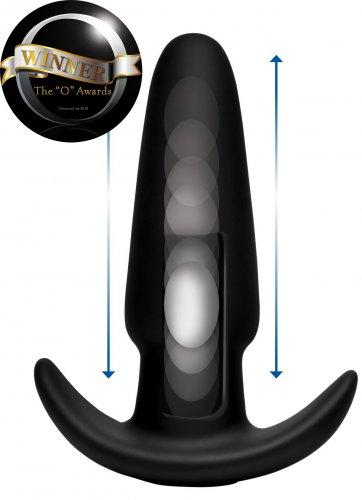 So, effectively, it roughly thrusts a ball to the opposing side of the toy. This strong toss of this internal ball causes the Thump-It! itself to move - due to the physics. (And applying physics properties to sex might be a new kink of mine if it can have results like this!)

If you forcefully tossed a heavy object at a friend, you'd expect your friend to be pushed backwards by the momentum as they caught it (unless they were bracing themselves). That principle is pretty much exactly how the Thump-It! works.

So, instead of ANY vibrations (the Thump-It! doesn't have any!), it has this thrusting motion instead. I think that's a vast improvement, but stayed tuned for more about that!

How Does It Feel?

This has become a pretty constant staple in the bedroom, so it's gotten a workout for my submissive and I. It's a fantastic fit for him (especially at the almost-2" size of the large), and I love how much he clearly enjoys it, so it's a good fit for me too.

At the lower settings, he compares the thumping to the feeling of having a plug wiggled inside of your butt. For a lot of people, once you insert a butt plug, it just kinda sits there. To add to the sensation, a lot of people like to push against the plug for little micro-thrusts or wiggle the plug within the butt. It only makes a tiny bit of movement, but that tiny bit of movement can feel absolutely amazing.

He compares the movement of the Thump-It! to that - only it's entirely automated, so you just get to sit back and relax.

We often leave it on the lower, thumping settings in order to really enjoy the amazing micro-thrusting sensation that's so unique.

With some experimenting in positions (and pretzeling yourself a bit), we've been able to get it to hit his prostate with the thicker size of the Large. It definitely requires experimenting with positions, though, as the standard "laying flat" didn't seem to do much of it. However, laying down with his legs pulled up towards his chest has been an A+ position for achieving prostate stimulation. 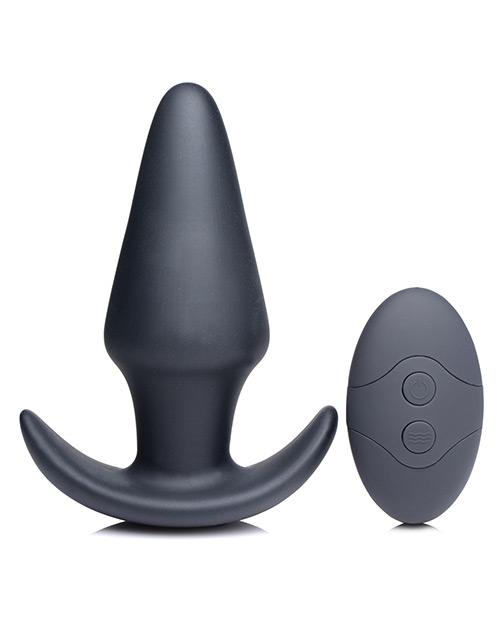 He's also really fond of the tapered tip and smooth silicone. The tip allows for really gentle, smooth insertion with a gradual stretch. (Especially since the Thump-It! is so thick!) The smooth silicone doesn't tend to absorb much lubricant, so we have yet to need to reapply lube after the initial application. (A thick gel-consistency lube like the Sliquid Sassy helps a lot with longevity!)

Noise-wise, it's not quiet, but it's not anywhere as loud as a wand massager. It makes a little "chuga chuga" noise - like an adorable little motorcycle, really. I don't know if it'd be loud enough to be heard outside of a closed door, but at the same time, it's a really unique noise, so it'd catch attention just purely for its novelty. It's not distracting or annoying.

The Thump-It! doesn't cause that numbness. Since the plug just does micro-thrusts up against the body, it doesn't have that same "bzzzzzz" sensation or noise of vibrations; it's entirely different, and its sensations hold up a lot better to long sessions.

That being said, the Thump-It! definitely can cause next-day soreness - just like a good fucking session. Its constant pressing against the body can definitely lead to a bit of that!

As a final note, even when the plug non-consensually turned off (it ran out of juice mid-session for us), it's still a fantastic plug. The internal weighted ball adds heft to it which leads to a lovely feeling of fullness and pressure. The shape stays inside the body, and the silicone is really comfortable. Even when turned off, it's a very pleasurable experience.

How Do You Control It?

They say every powerful warrior has its Achilles' heel, and the control structure is the Thump-It!'s weakness. There is a single button on the base of the Thump-It! Thumping Plug. This button functions as the power and the control for the plug if choosing to not use the remote.

That's where the problem is. This button is recessed into the base of the toy. So pressing down this button, when you're holding it in your hand, is already difficult and requires some good finger strength. 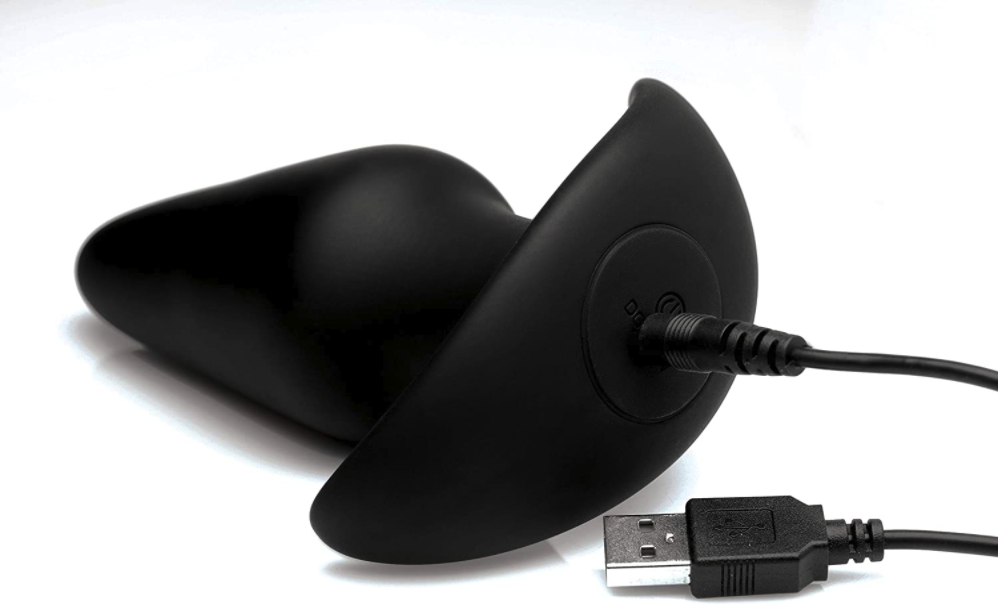 When you have the plug already inside of your body (in the butt, where you can't see it!), it becomes pretty impossible to change the settings. Pressing down on the button feels like you're going to push the thing all the way up your backside.

For solo use of this plug, I recommend getting used to pulling the toy out entirely in order to change the thumping patterns. That, or be smarter than I was and put a piece of masking tape or something tactile on top of the control button, so you can easily ascertain where the control is - even when you can't see it.

Luckily, it comes with a remote to negate a lot of this problem. We'll get to that later.

Does It Stay In?

Heck yeah! A common problem I've had with other "do their own movement" toys - including sex machines - is the fact that they like to thrust their way right out of the butt! The constant movement, instead of dealing with the resistance that the butt can provide, can tend to slide itself out of the butt instead of staying in it.

Not so with the Thump-It! I can't speak for the Medium, but with the Large, the large retention area makes the plug stay in wonderfully. He's walked with it in, had sex (with him on top in missionary, so an active position) with it in, and completed chores with it in. It stays inside the body wonderfully, and we've never had any issues with it sliding out.

What About the Remote?

As a "hail mary!" pass to avoid the control button on the base, the Thump-It! Thumping Plug comes with a remote control. Thank goodness this works pretty swimmingly. 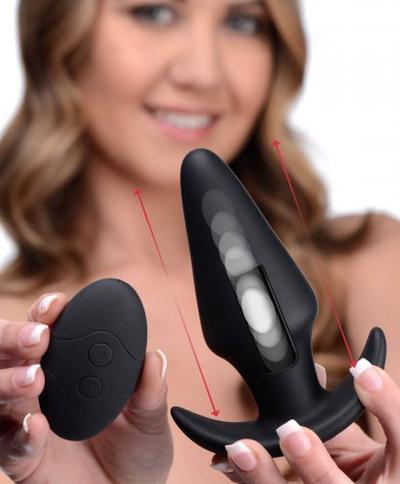 As long as the remote is pointed directly at the plug and nothing is in the way, it transmits most of the time. It might take a button press or two, but it'll get the command eventually.

Body parts seem to have a minimal effect on the remote (like if a thigh is in the way), but clothing seems to reduce the remote effectivity. It's definitely one of those remote-controlled sex toys that's designed for bedroom use between mostly-naked partners.

The remote doesn't transmit flawlessly, and it tends to have difficulties when not directly pointing at the plug or when dealing with fabrics layers, so it's really not a good fit for taking it out in public.

Along with the noise the Thump-It! puts out, the Thump-It! is very much a home-bound toy. The remote, however, works awesomely enough that it's a great alternative to pressing that annoying button on the base - and that's all I needed from it.

I absolutely love the Thump-It! Thumping Plug, and it currently sits on my bedside table. After every use, I wash it and then promptly return it there.

Bedside table space is expensive real estate, so when this toy is sitting there constantly, it's just another sign of how much I love it - and how valuable I consider it.