by MISTRESS KAY
Published: JULY 27, 2020 | Updated: FEBRUARY 11, 2021 10:37:29
Presented by KINKLY SHOP
The Dame Arc's vibrations are very targeted, the rigid design hits the g-spot perfectly, and the entire toy feels luxurious. I absolutely love the Dame Arc design itself, but the button placement drives me a bit nuts sometimes.
Table of Contents

Compared to other g-spot toys, the Dame Arc is on the lower-end of the price scale. It's joined at that price point by similar-looking g-spot vibrators including the asymmetrical We-Vibe Rave, the bullet-vibrator-powered We-Vibe Pleasure Mate Collection, the Kama Sutra Dandiya, and the LELO Gigi 2. 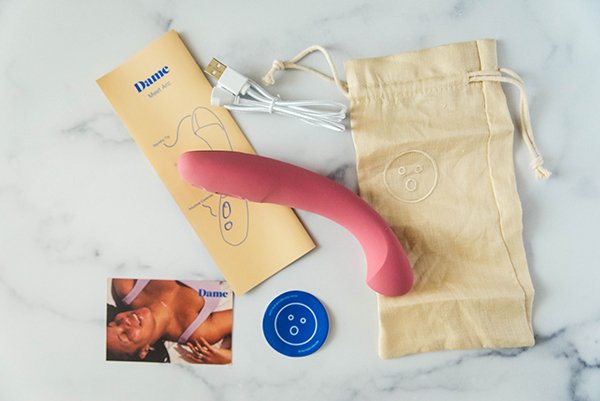 The Dame Arc is designed for g-spot pleasure, and that's exactly where this toy was going to end up. My favorite g-spot toy has a similar curvature to the Dame Arc, and as someone with a deeper g-spot that requires more extreme curves from my vibrators, the Dame Arc seemed like a great fit. 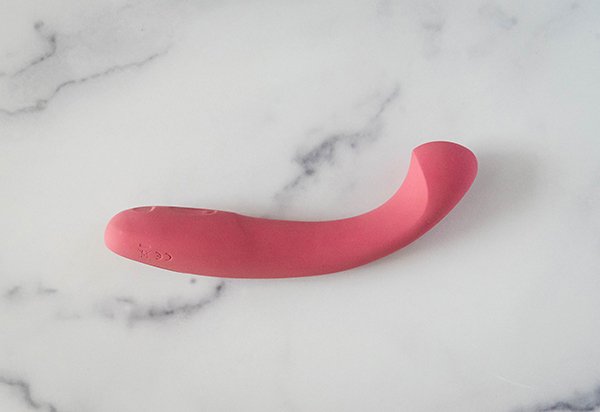 Button placement is always a common complaint with almost all vibrators. After all, who wants to stop their pleasure to try to "hunt down" the button to press to get more sensation? Even worse, there are even some toy designs where the buttons disappear into the vagina/butt when inserted. 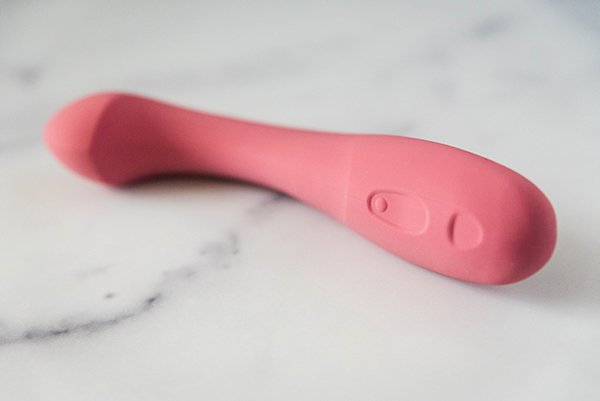 After that experience, I handed the Dame Arc off to my partner to use on me. (Hey, a girl's allowed to be lazy sometimes). From this different angle, the button issue was even more prominent.

My body really doesn't require vibrations for g-spot pleasure, so the fact that the Dame Arc is equipped with vibrations is just icing on the cake. Most of the time, a toy that looks like the 8" Glass Ribbed G-Spot is my g-spot toy of choice.

So while this button issue is surprising (mostly because I'm astounded no one caught that in testing; maybe it's my thumb length? Maybe my g-spot is deeper than others' which means that I'm holding a part of the handle that was never intended to be held?), it isn't a deal-breaker for me. I actually like to pretend it's a high-end function of the Dame Arc.

"The shape of this toy is fantastic! It curves in exactly the right way to get that delicious come-hither motion against my G-spot, and the bulbed head is firm but not too hard."

Before we delve into the nitty-gritty, let's talk about vibrations. The vibrations on the Dame Arc aren't particularly powerful. For a lot of people, this will be a-okay. For most, the g-spot responds better to pressure and constant movement than vibrations. For others, who love powerful vibrations on their g-spot, this might be a let-down.

The bright side to the softer vibrations is the softer sound. The Dame Arc is particularly quiet, and once it's in the body, you only get a gentle humming sound from it. It's not loud, it doesn't drag you out of your headspace, and it's actually a bit like a sensual white noise.

You get more noise from the Dame Arc if you use it clitorally, but if you're using it on the g-spot, it's even harder to hear in the same room.

The Dame Arc is covered in a luxurious silicone. Until you've felt a silicone material like this, it's hard to entirely describe it. It's silky-smooth, and your fingers will glide over its surface.

When new partners encounter some of my silicone toys like this, there is definitely a couple of minutes spent "petting" the toy before it ever gets used. It's a lovely-feeling material, and I absolutely love its choice for the Dame Arc.

It also means that the 1.4" diameter of this g-spot vibe feels exactly like a 1.4" diameter. This felt like a very comfortable size (as someone who hates vaginal stretching), and it felt on-par with what I'd expect from a biological penis.

The head is the widest part, so if it's feeling a bit tight during insertion, have a bit of patience to allow your body to slowly adjust to the thickest point (the head). 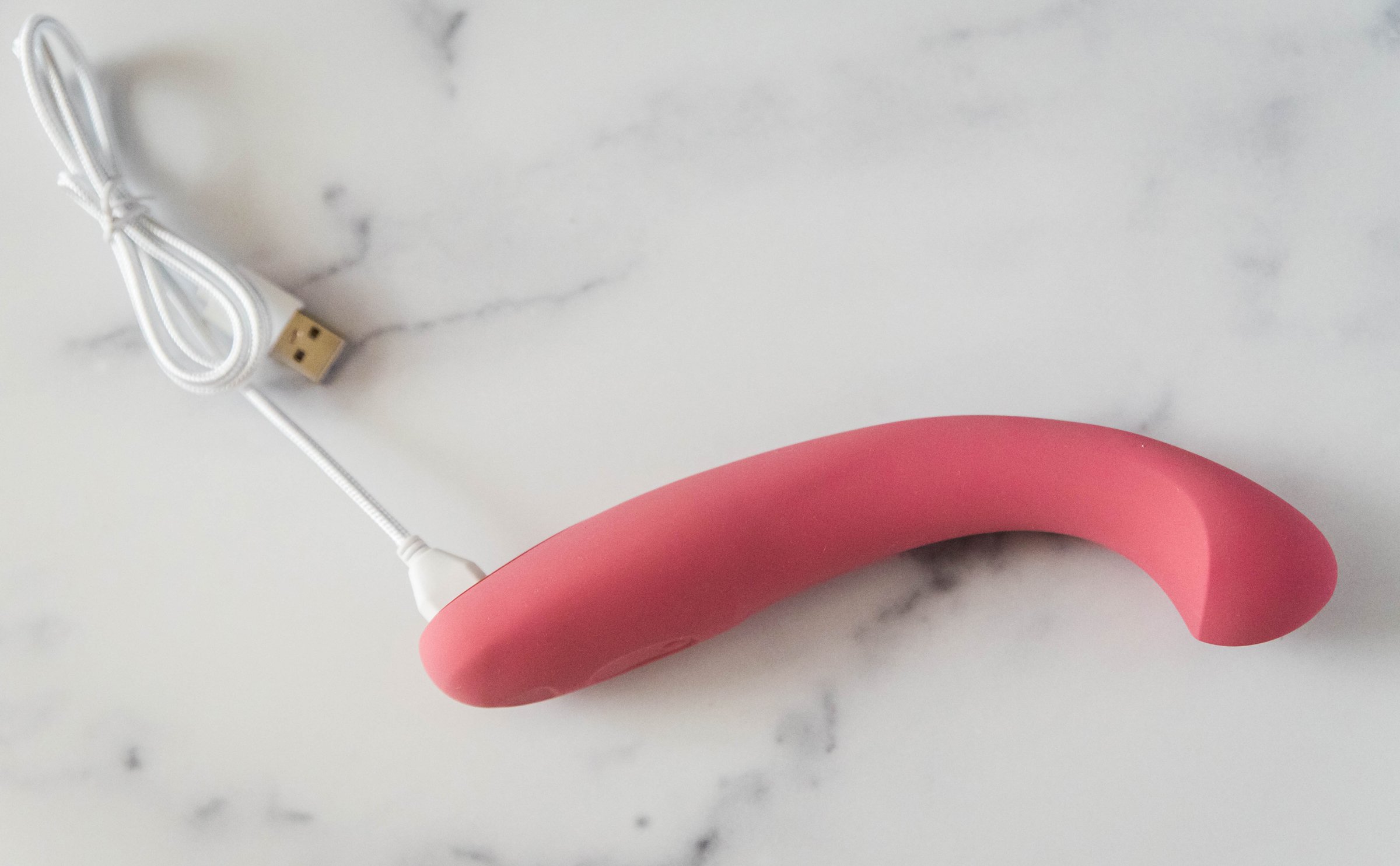 As a high-quality toy made from a high-end company, the Dame Arc is made from silicone. It feels like a layer of silicone over-top of a plastic interior and I have no complaints about that! The plastic transfers vibrations better, so you get the best of both worlds: a silicone toy while also having the strongest vibrations possible. As you can imagine, this means that the Dame Arc is made from a pretty rigid, non-plushy but still silky silicone.

I highly recommend using a lubricant with any insertable silicone toy. I, personally, find that going without lube causes some uncomfortable drag - and why bother with that when the solution is so simple? When using lube, you'll want to use water-based lubricant. Other lubricant bases may harm the material of your Dame Arc.

Being made from medical-grade silicone with a waterproof design has its perks. Mainly, the Dame Arc is fantastically easy to clean - even if this is the first sex toy you've ever bought. Warm water and mild soap will clean up the Dame Arc easily, and since it doesn't have any crevices or tough-to-reach spots, you pretty much just shove this g-spot toy under running water, add some mild soap, scrub-a-dub-dub, and you're good to go! It's very simple to clean.

When you're done cleaning the toy, make sure to towel it entirely dry before you place this vibrating g-spot toy onto the charger. Simple to charge, the Dame Arc has two magnetic contact points on the backside of the toy. The magnetic charger will only charge one-way (thankfully!), so it's impossible to put the charger on wrong. The charger snaps on really easily, and while it isn't powerful enough to hold up the Dame Arc's weight all on its own, it's strong enough to keep the toy from rolling or moving around and easily losing its connection.

Have any issues? Kinkly Shop will take care of you within 30 days of product receipt (to help handle those products that are defective off-the-lot), and past that, the Dame Arc has a 3-year warranty that protects you from any defects in materials or workmanship that starts from the date of purchase. (Keep your receipt!) Three years is an impressive manufacturer's warranty! 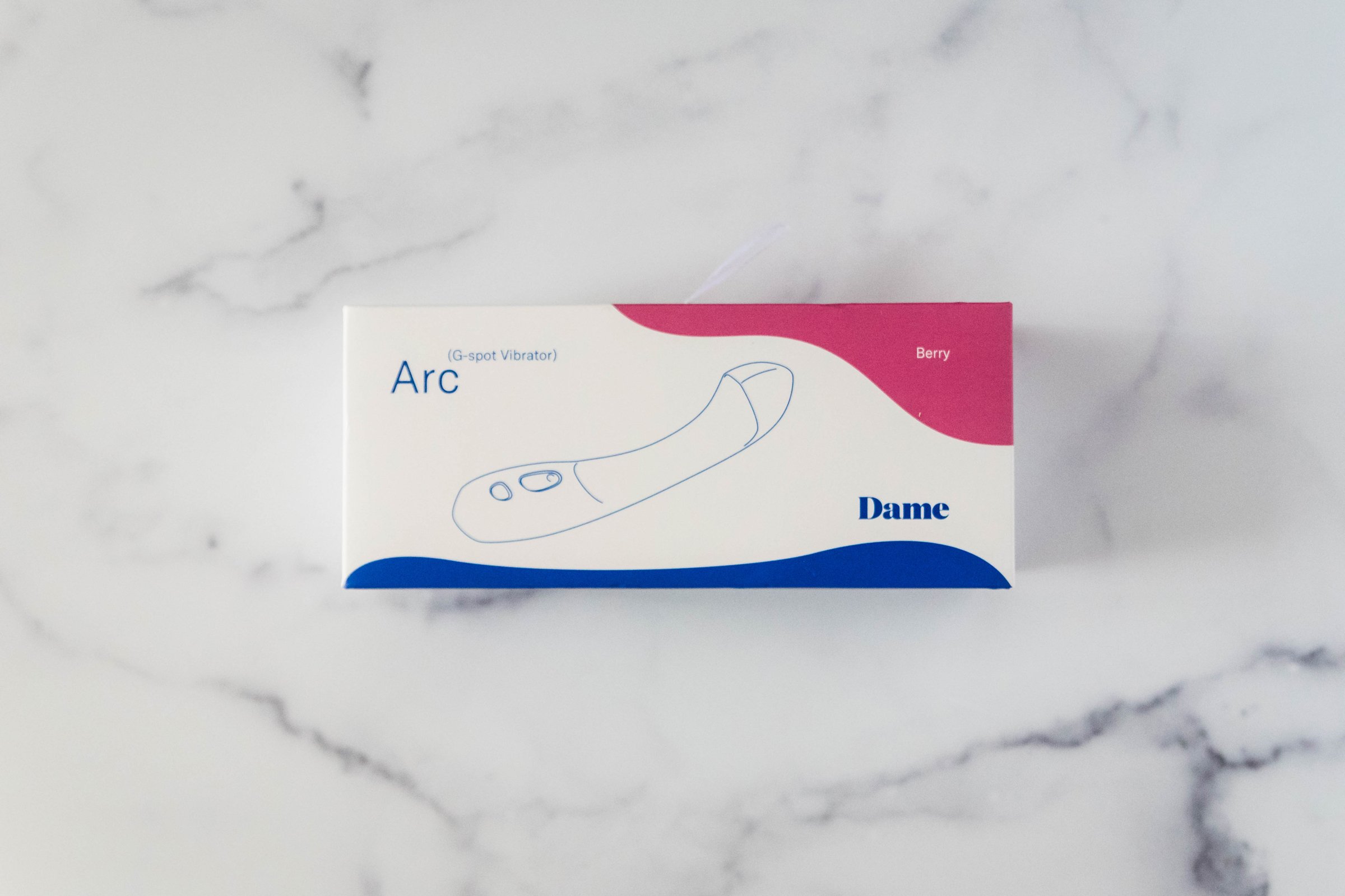 The Dame Arc comes in a very sturdy cardboard box - which, of course, is packaged very discreetly from Kinkly Shop. There's never any mention of kink or anything else on the outer box. (And I actually had mistaken my Kinkly Shop package for a box of macaroni I'd been expecting). 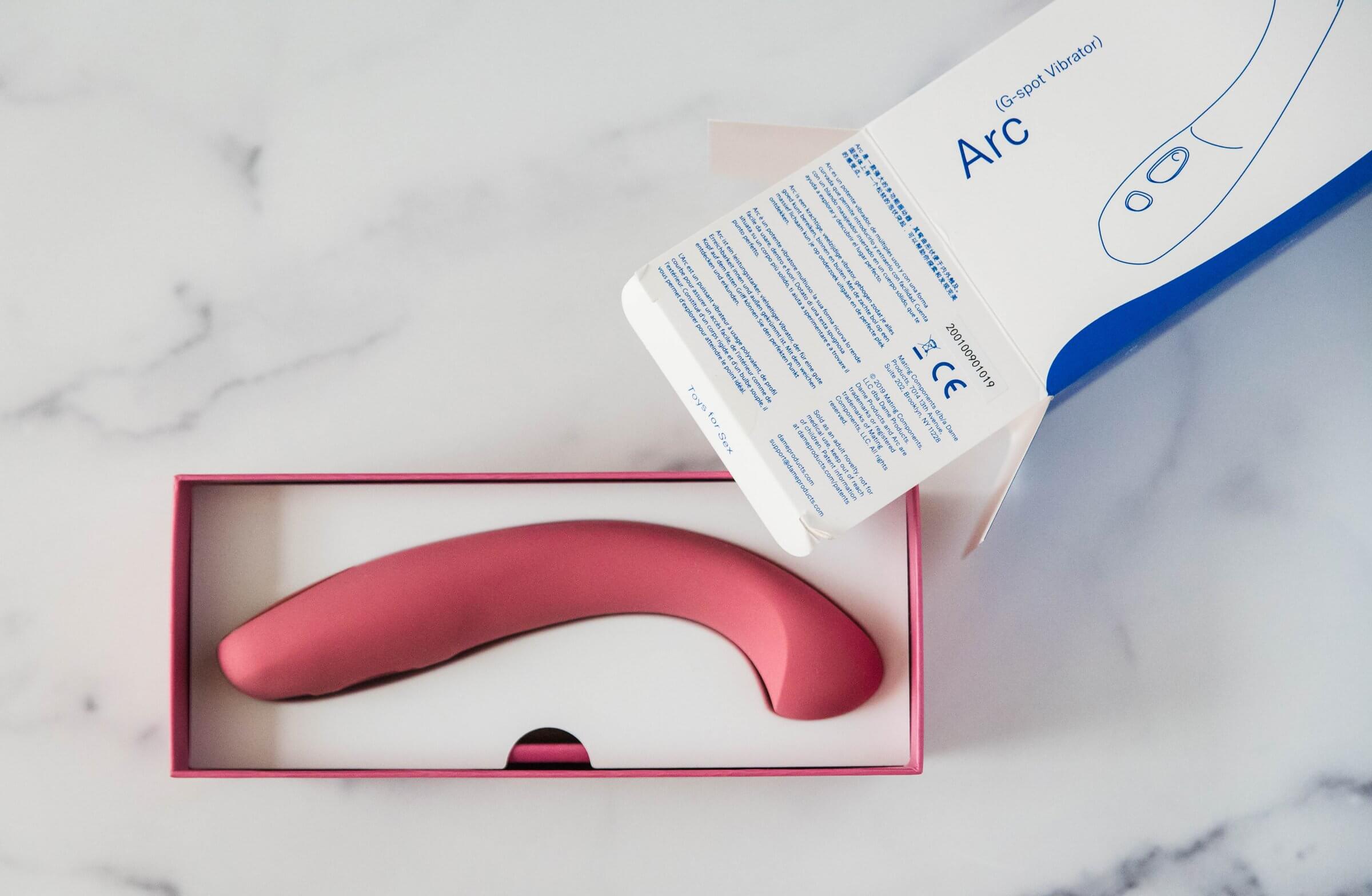 The vibrations are very targeted, the rigid design hits the g-spot perfectly, and the entire toy feels luxurious. As long as you aren't invested in having the exact-same sensation and the exact-same vibrations at all times in order to climb to orgasm, the button issue will be a minor frustration.

Want stronger vibrations at the same price point? Welcome to the We-Vibe Rave. It's a well-loved vibe that has vibrations that are strong enough to double as a clitoral vibe. It doesn't have a curve as extreme as the Dame Arc, but if vibrations are important, the We-Vibe is a great choice. (It's worth noting that the We-Vibe Rave IS noticeably thicker, though. Make sure to compare the diameters.)

If you're willing to forego vibrations, the 8" Glass Ribbed G-Spot or LELO Ella has a very-similar design at a lower price point. Both are extremely rigid for g-spot sensation. If you're attached to the silicone, I'd definitely lean towards the LELO Ella, but I love how easily and smooth the 8" Glass Ribbed G-Spot slides in (pretty much no lube required; at least for me).