Sex Toy of the Month: 6 Cool Things to Know About Eva by Dame Products

Last month, we featured our very first Sex Toy of the Month. We picked the Magic Wand Rechargeable. Now, as you know, the Magic Wand is a classic (and one of our readers’ favorites!) We love classics. But we also love innovation. So, this month, we're proud to present a toy way on over on the other end of the spectrum, Eva by Dame Products. Whereas the Magic Wand has an orgasmic history that spans decades, Eva hit the market just three years ago. But in that short time, it has made waves. This toy is innovative, unique and totally adorable. Here are six cool things you should know about it that help explain why we’re paying it tribute.

It Checks All the Right Boxes

Here at Kinkly, we want what's best for ya'll. That's part of our mission. So, we only highlight sex toys that we believe to be body-safe and well made. We also love sex toys that are unique and innovative and sparkly in some significant genital-pleasing way. Eva checks all the boxes. It's made of body-safe silicone, it's USB rechargeable and it sports a cute-as-a-button bug-like shape that’s engineered to deliver pleasure in a brand-new way. We love that! It's All About the Clitoris

The clitoris is a pleasure power-house, but it doesn’t always get its due, especially when it comes to heterosexual, partnered sex. What we love about this toy is that it's all about the almighty clit. That's the only thing it touches. As a result, this toy says some things. Some important things. Like, this is a place many people need to be touched in order to orgasm (even during intercourse). That stimulating this spot during sex is not only OK, but important enough to build a machine for. Yes, we know, there are many other delicious ways to have sex that don't involve putting a penis in a vagina. The people over at Dame probably know that too. Even so, for many heterosexual people, that kind of sex is their bread and butter. And we think Eva kinda says, that’s cool. Go for it. Do it in any position you want. With all the same spontaneity. And way more orgasms.

“[Eva] is special because it is the only product on the market that allows the vulva-haver to enjoy clitoral stimulation in a way that doesn't interfere with the partner's experience ... except to make it more enjoyable for all!” says Dame CEO Alexandra Fine. 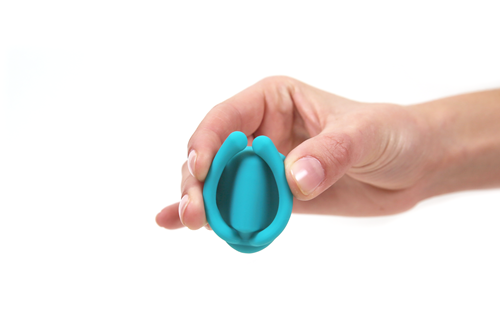 Sex toys can be profitable, but they're still taboo. Or, at least many traditional businesses still worry that their customers and investors will think so. So, while many sex industry entrepreneurs have been stymied by an inability to access traditional sources of startup funding, Eva was able to capitalize on a new form of funding, crowdfunding – and make a splash doing it. While Eva isn't the first crowdfunded sex toy, it's definitely the most successful one to date. In its 2014 Indiegogo campaign, Eva raised $575,000 in just 45 days, garnering tons of positive press in the process.

It's Designed, Sold and Marketed by Women

Many of the sex toys on the market are designed for female anatomy, but that doesn't mean that they're designed by people with female anatomy - and that's an important distinction. This isn't just a problem in the sex toy industry. In fact, many products that are designed for women - everything from maxi pads to mascara - are designed, marketed and sold by men. In 2014, the Huffington Post and Catalyst, an organization whose mission is to boost women in business, looked at 19 of the largest companies that cater to women. Just one had a senior leadership team comprised of mostly women. This study didn't examine companies making sex toys, but the trend does explain why, until quite recently, many sex toys did a better job of resembling male genitalia than they did at producing pleasure.

In the last few years, however, a number of female-run companies have burst onto the scene with ideas not just about how sex toys for female bodies should look and feel, but how they should be marketed. Dame - and its flagship product, Eva, - has been front and center of this movement. Its founders, Alexandra Fine and Janet Lieberman, founded the company to help close the "pleasure gap" between male and female orgasm during partnered, heterosexual sex.

Thanks to the efforts of industry leaders like these, the latest sex toys are increasingly being marketed much like many of the other products we buy, allowing their use to become much more mainstream. That helps promote pleasure for everyone, which is definitely a good thing.

It's Wearable - In a Good Way

There are a lot of vibrators out there that are marketed as being wearable. What's great about Eva is that rather than using elastic straps (yeah, it's a thing) or having to hold it inside the vagina (which can make things a little squished during intercourse), Eva is designed to nestle up into the labia and sort of hang out there, vibrating away.

“Eva is a small, helping vibe that is partner-friendly. The two funky looking wings create a tiny bit of force that keep the product secure during sex,” Fine told us.

And that’s just the thing. It’s friendly. It isn’t bulky or strappy or intimidating. Not that there's necessarily anything wrong with any of those things in sex toy. But they aren't for everyone, especially people who are new to sex toys. Eva aims to be unobtrusive, which makes it a great entry-level toy. We like that. To be fair, not all reviewers have loved this design. As some pointed out, not all labia are the same, so this toy won't work well for everyone. But, we'd argue that there isn't a sex toy out there that will. Bodies are different and people are individual in their tastes and, well, getting off is actually kinda complicated once you put all these variables together. It's also why we like to celebrate toys - and makers - that are ambitious when it comes to new designs and ideas. There are plenty of dongs out there. This is something different. Not everyone will like it. But we know that some people like it quite a lot.