So let's get into the meat of the Satisfyer Double Joy review, shall we? 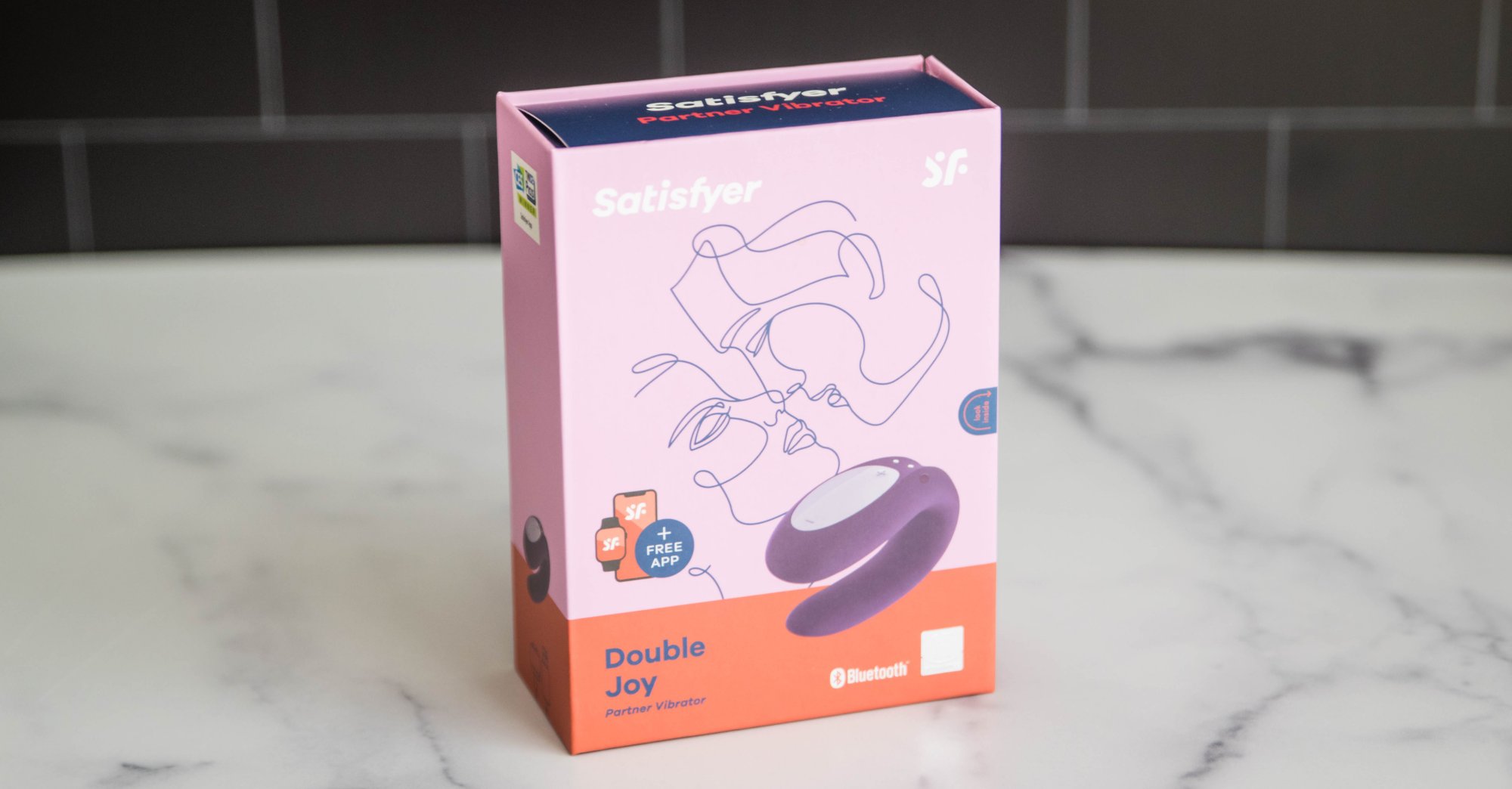 For some people, that's totally doable, and you'll find some light g-spot stimulation from the Satisfyer Double Joy. For me, that wasn't happening, and while the internal "arm" helped stabilize the sex toy so that it could be left inside of the body hands-free, it didn't hit my g-spot.

With lots of clenching (and releasing) of the internal muscles, the Double Joy can slide itself out of the vagina, but as long as you're doing something like sitting down on top of it (like with a straight-back posture while in a chair) or wearing underwear, the Satisfyer Double Joy stays nicely inside the body.

The Double Joy was designed for pleasure for both partners during intercourse. This shape allows it to stay inside of the body while having sex - which means that the vagina-owning person receives clitoral stimulation and (possibly) g-spot stimulation while the penis-owning person also gets to enjoy vibrations on the penis with each thrust. For that, the shape of this silicone vibrator works well. The slender interior arm ensures that the penis slides against it without taking up too much "space" while the large button design on the external/clitoral end means you can press it pretty easily without fumbling for buttons or trying to run your fingers along the silicone surface to "find" the buttons. The buttons are always easy to find even between squished bodies.

On that same note, if surface vibrations aren't your jam, you might want to make sure that you have other types of pleasure to enjoy while using the Double Joy in order to reach orgasm with it.

If your body responds better to lighter vibrations or if your clitoris is positioned closer to your vaginal entrance, you might have an entirely different experience with the Satisfyer Double Joy.

The plastic platform of buttons features a + and - button which allow you to control the vibrations of the Satisfyer Double Joy. The buttons click with a satisfying "click" and are extremely easy to press down. Any pressure to this pad of buttons will adjust the vibration intensity - which is something to consider if you were planning to "press down" on this side of the vibrator (the clitoral end) for added sensation. You can do it flat-palmed, but if you attempt to use specific fingers, it will change the vibrations. Directly to the side of the buttons is the two metal points that function as connection points for charging.

Any presses to the middle of this platform button (with the "SF" logo) will not change the toy's mode; it just seems like an inert design. The presses must be made specifically to either end of the button to make the vibrations change.

The Satisfyer Double Joy is equipped with two vibration motors. The motors are exactly where you'd expect them: one within the clitoral end near the middle of the side and the other near-ish the tip of the insertable end.

The vibrations on the Satisfyer Double Joy are definitely surface-feeling vibrations. They don't really feel "under the skin" or like something that rumbles through you. They feel like surface-focused vibrations - and they're on the average side of intensity.

However, those gentler vibrations definitely come with one positive: a quieter noise. The Satisfyer Double Joy is relatively quiet, and while you can hear a slight "buzz" while using it and while in the same room, when it's inserted into the body, it's relatively hard to hear - and it's definitely not "loud". You wouldn't be able to hear it when inserted inside the body from another room - even if the door was open between the rooms.

The Satisfyer Double Joy includes two buttons on the plastic "platform" you can see. It's a rocker button with one side of this platform functioning as the + intensity button while the other end functions as the - intensity for the vibrations. Press the plus and minus buttons to scroll through the equipped 10 different modes of vibration. It's a very satisfying function, scrolls through the options easily, and works really easily - even if you never look into the instruction manual for the sex toy.

To turn the Satisfyer Double Joy on and off, you press and hold the + button for two seconds. It will then pop off or turn on. Be careful that you don't hold it too long, though, or you'll throw it into the App mode where it will wait for a Bluetooth signal. It's really easy to avoid that, though, as waiting the prerequisite four seconds to connect to Satisfyer Connect App mode feels awkwardly long - while the on/off function seems like a slight wait.

The new Satisfyer app is something beautiful to behold. I thought it was overkill when the app was already winning awards upon release, but it really isn't. For being a free app available with lower-priced products, it's amazing and easily rivals the apps of some of the sex toys that are four times its cost.

First off, using the app does NOT require any log-in or profile set-up. You can be "anonymous" for the majority of the functions on the app - no matter whether it's for privacy concerns or just wanting to jump straight into some play and not worry about account set-up. Account set-up is required if you want to use long-distance control or connect with others who use the Satisfyer system.

The toy sets up easily, and the screen walks you through the instructions. I had it connected within seconds the first time I used it, and it's just as easy each subsequent time as well.

The five modes the app unlocks are Program Play, Live Control, Ambient Sound, Music Vibes, and Remote Play. All of the functions (aside from Remote Play) can be used without making an account.

Live Mode is real-time control of the vibrator with the touch of a finger. You can drag the motors (each individual one for the two motors within the Double Joy!) up and down to adjust the vibration intensities. The Satisfyer Connect App also allows you to control up to FOUR toys at once with this function, so if you have the Double Joy and your partner is wearing one of the cock rings, you both can experience the same changes in vibration intensity at the exact same time. It's pretty neat - and not really something that a lot of other sex toy apps offer.

(I like to show off screenshots of the app in reviews when possible, but the Satisfyer Connect App's permissions do not allow for any screenshots and will prohibit them.)

Let's look into some of the idiosyncrasies you might be looking to enjoy, though.

If the app-controlled aspect is what has you in love, you should look into the other Satisfyer Connect App sex toys from Satisfyer. There's a small collection of them - with more come - at this lower price point for fun ways to enjoy entry-level sex toys.

Alternatively, the majority of We-Vibe products are also compatible with a cell phone app for new ways to explore your sex toy. We-Vibe's products also allow for long-distance control of the sex toy in question.