The Verdict: 4 out of 5 Kinkly Hearts

It does all of this without inflation or electronics. The internal components use a stainless steel interior (covered by that colorful layer of silicone you see!) with a design that expands and contracts. Unlike inflatable toys, this gives you greater control over the exact expansion - and provides equal expansion throughout the entire length of the Odile. Since the Odile doesn't use any electronics to expand and contract, it's also entirely silent (zero noise at all), and it will never need to be replaced due to an aging battery or a dead motor. 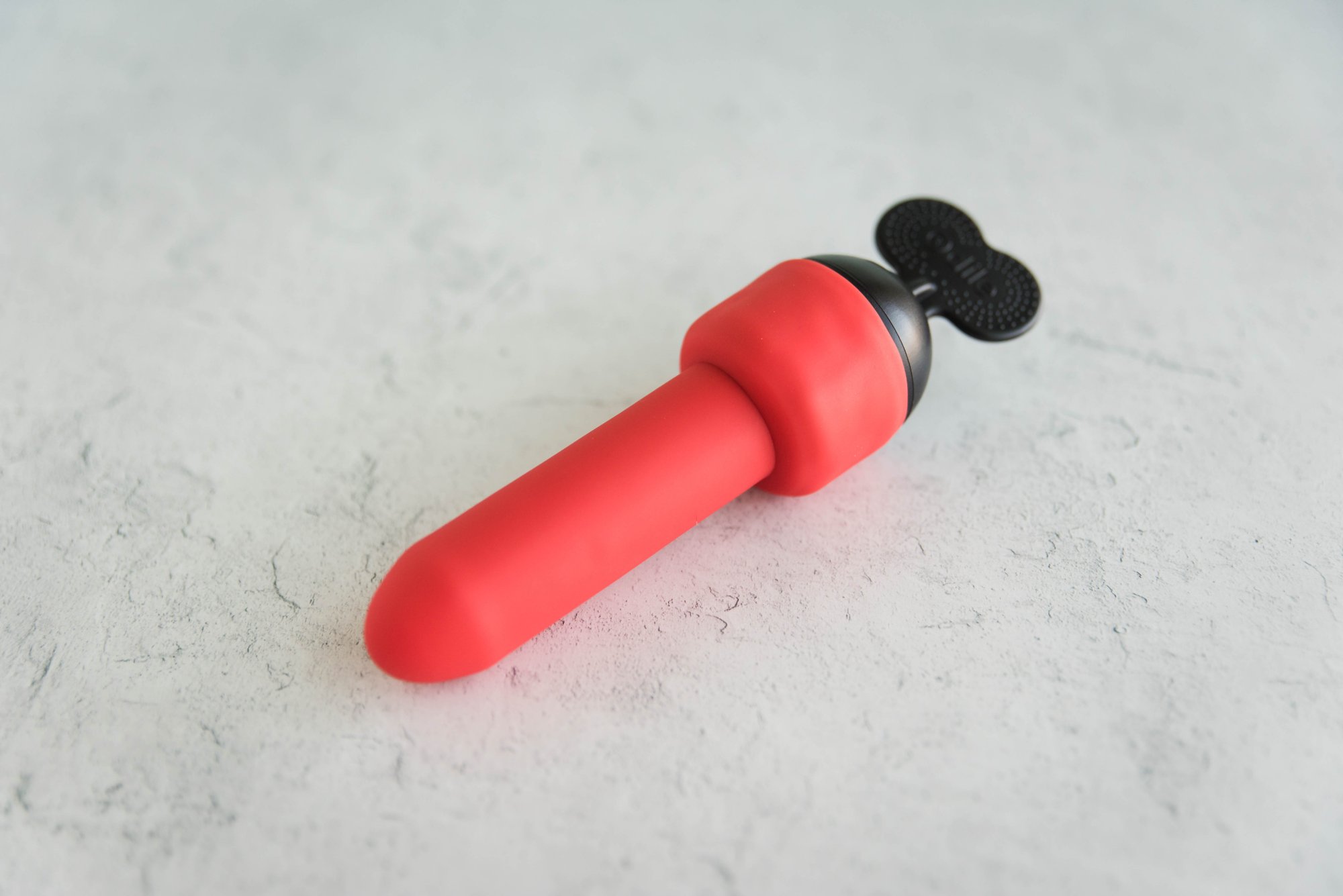 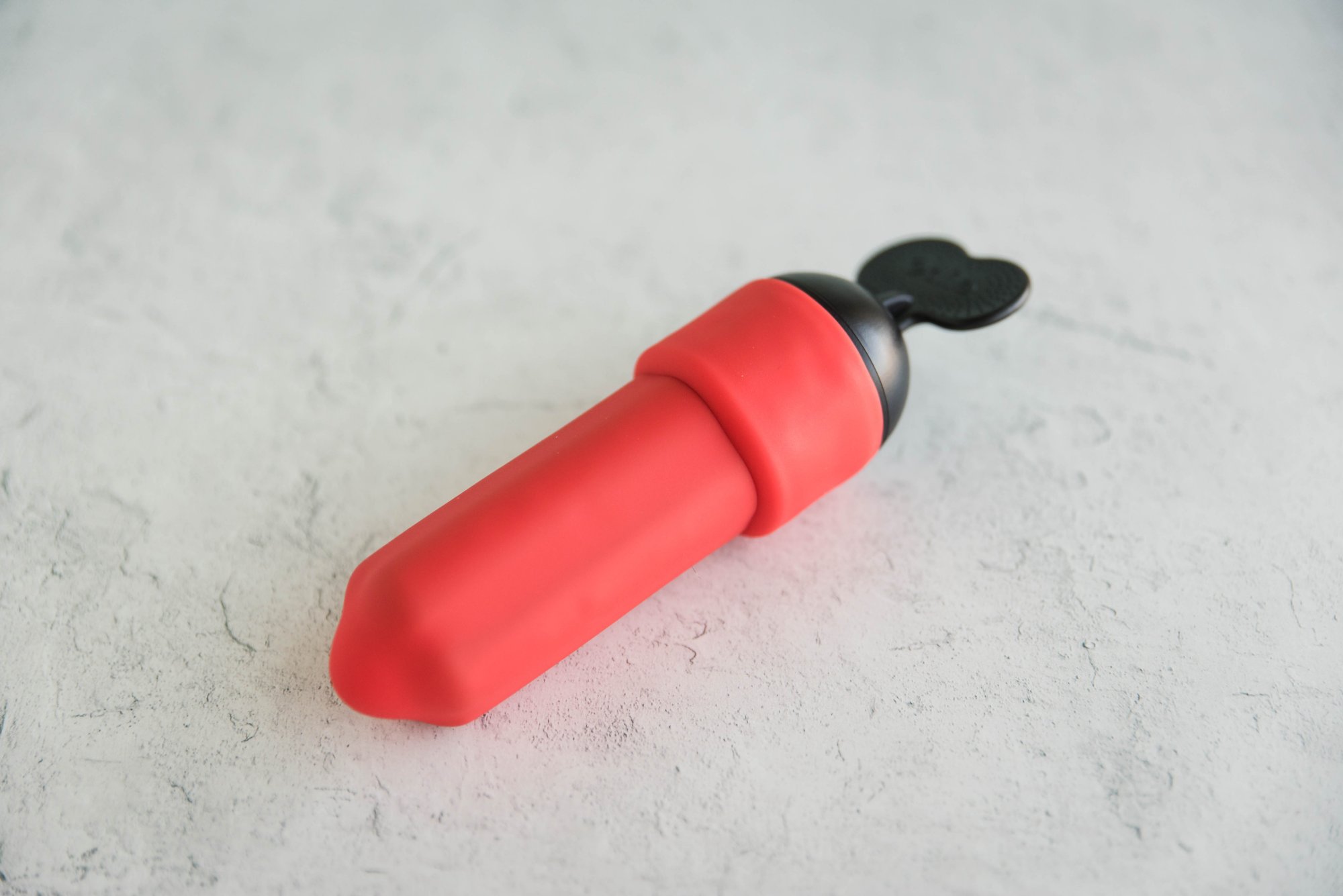 With all of that in mind, let's dig into this Odile review:

That didn't happen to be the case - but we were extra cautious about it. We usually used the Odile to 3/4ths of the shaft rather than pushing it further in. Since I did a lot of hand-holding of the Odile, I tend to get a bit bored when I'm being used as a glorified stationary sex toy holder. This meant I did a lot of the thrusting with the Odile into his body.

Because of this slim flared base, I wouldn't recommend going rough with the thrusting. I never let go of the base - and we didn't go nearly as hard as we would with other thrusting toys, so we never had any issue with the Odile.

I'll also admit to being slightly concerned that the Odile might not be able to hold its shape when a butt's powerful muscles started to compress it. Turns out, I had nothing to be concerned about.

Even at the thickest setting (1.5"), the Odile holds perfectly firm - with no concerns - even when being pretty rough with the toy. I now have zero concerns that the Odile is going to collapse under pressure. It's really well-built like that. It stays on the size you put it on, and the only adjustment to the size that's going to accidentally happen is if/when you accidentally bump the key at the base of the Odile.

I'll admit that the "key" at the base can get slightly annoying for handling the Odile. In fact, I'd say that it's the worst part of the Odile. I love the hell out of most parts about this toy - the adjustable thickness, the silky-smooth silicone, the easy-to-use design, and how quiet it is.

But the fact that the "key" exists at the base means that you can't sit down on it - or put any pressure onto the base of the Odile while using it. As someone who loves to use toys - and "force" my partner to enjoy them for long periods of time while we do something else, the Odile doesn't necessarily fit into my playstyle.

Due to its completely straight design (which is honestly perfect for a dilator! Not faulting it there!), the Odile doesn't necessarily stay in the butt without using some pressure to hold it in place. Over time - and more quickly if your butthole is contracting in pleasure - the Odile will start to slide itself out since there's no area of slimmer diameter (like the stem of most butt plugs) to help the butt "grip" onto it. This, again, means that you need to pay full attention to the Odile while using it - or else your Odile ends up on the floor or bed.

However, while the Odile says that it's waterproof, I don't see any easy way to ensure that all water is thoroughly dried in the Odile before storage. I worry that water might dry inside the toy and provide unseen mold, and you'd never have any idea. For that reason, I've been mostly treating it as "splashproof" rather than wholly waterproof. When we submerged it, I left it on the bathroom sink for a few days and would periodically shake out the water.

To be clear, though, that isn't 100% true for the Odile at all sizes. The perfect-roundness of the Odile shaft changes - just slightly - at the widest diameter. The toy gets more of a "flower" shape to it - with five, distinct, visible protrusions from the expanding internal mechanism. This isn't distinctly noticeable during penetration, but the Odile does feel more rigid and firm at the widest setting compared to the slimmest setting.

Since the Odile has zero electronic parts, it's entirely quiet. Like, my mouse and keyboard makes more noise than when I turn the dial on the Odile. I breathe louder than the Odile is. If you're someone who has discretion requirements, the Odile can easily fit into them; it's entirely sound-free.

The Odile has a really unique design, and I wish Odile clearly explained it somewhere so I could copy and paste their explanation instead of attempting (and possibly poorly explaining!) how its internal mechanisms work.

From my end, though, here's what it seems like is happening:

That thick base of the Odile - where the key attaches - houses a spreading mechanism. Attached to this mechanism are five separate, long arms that make up the length of the dilator that you insert. When the Odile is fully compressed, those five arms touch, side-to-side, to make the 1" base of the starting diameter.

As you start to expand the size using the key at the base of the Odile, those five separate, long arms start to "expand" - which makes the diameter of the Odile get thicker. At the same time, it gently stretches the layer of silicone that surrounds the internal arms.

When you reach the thickest function of the Odile (1.5" in diameter), that five-arm design becomes a lot more noticeable. You can feel the five separate "arms" - and you can feel the squishy give of the silicone material in the gaps between them.

An easy visual would be to attempt to straighten all of your fingers - then touch them together to make the smallest diameter you can possibly make. (Imagine you're trying to insert your entire hand into a tight pipe or a potato chip can) That's the Odile at rest. Now gently spread your fingers all away from one another. That's the Odile as it gently expands in diameter. If you'd just insert your hand into a layer of silicone, you'd essentially have the Odile's design in a nutshell!

Due to this neat design, the Odile does tend to have the smoothest, most-even, circular, tapered tip when the Odile is at its smaller settings. At the thickest settings the tapered design of the Odile reduces, and the toy has a little bit of a "flower"-looking tip with the five different arms instead of the gently tapered tip you see when the Odile is fully compressed.

Since everything about the Odile is fully mechanical with zero electronics, there's no noise to be had. The loudest part of the process is when I pick the toy up and ruffle the bedsheets a bit. There is no squeaking or grinding to be had while turning the Odile's key. 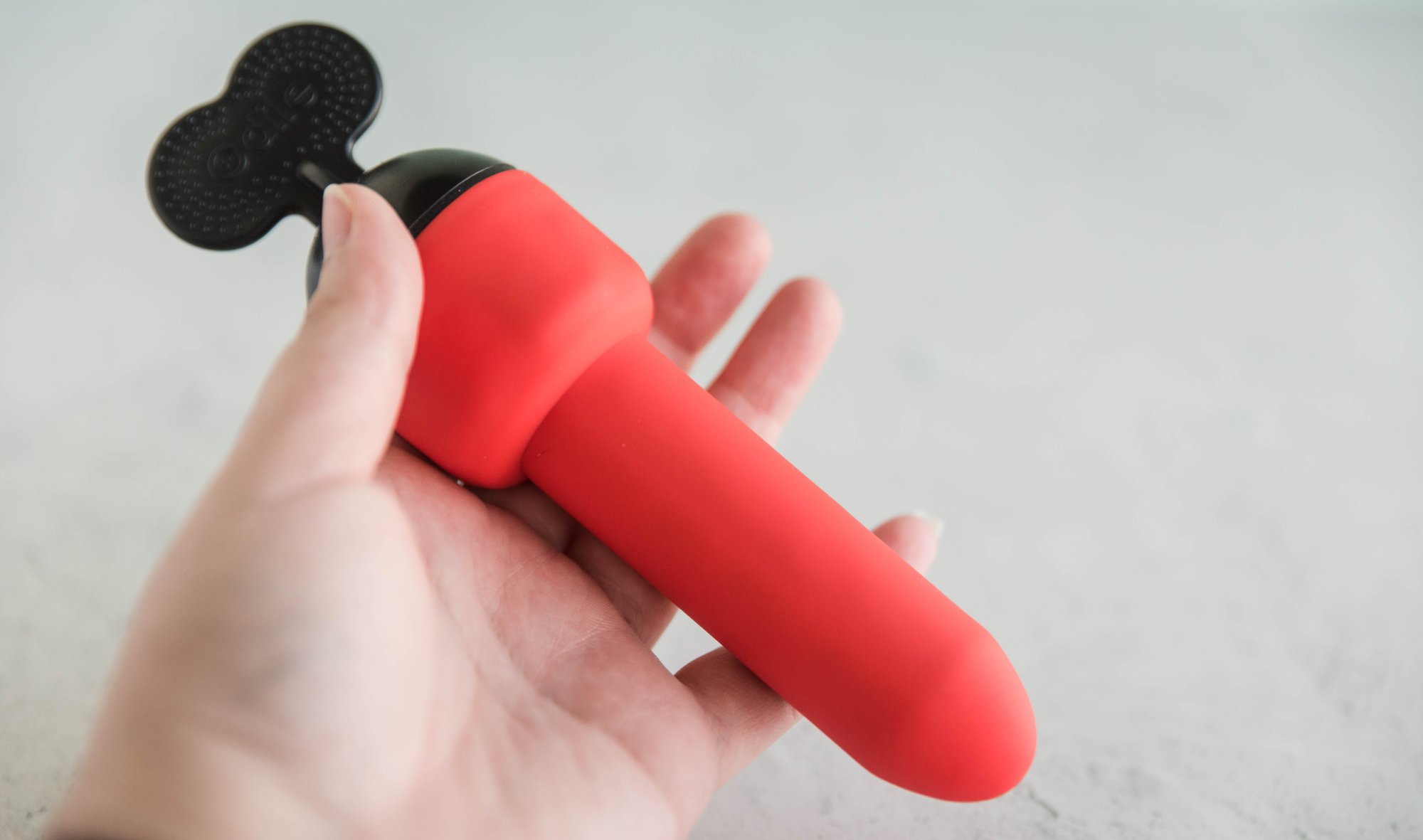 When cleaning the Odile, you'll want to use warm water and mild soap to clean all of the silicone surface areas. While the Odile's instruction manual doesn't say anything about waterproof capabilities, the Odile feature page on Kinkly Shop states that the Odile is waterproof. Any excess water that gets inside the Odile should be firmly shaken out while the Odile is tipped upside down.

When using anything anally, it's a MUST to use lube. Ensure that it's a water-based lube to avoid any interactions between your silicone lube and the silicone material of your body safe sex toy.

I can't find any information about any warranty for the Odile at all. There's no information included in the instruction manual. It's really, really odd for a high-quality sex toy to not have any sort of warranty or guarantee. 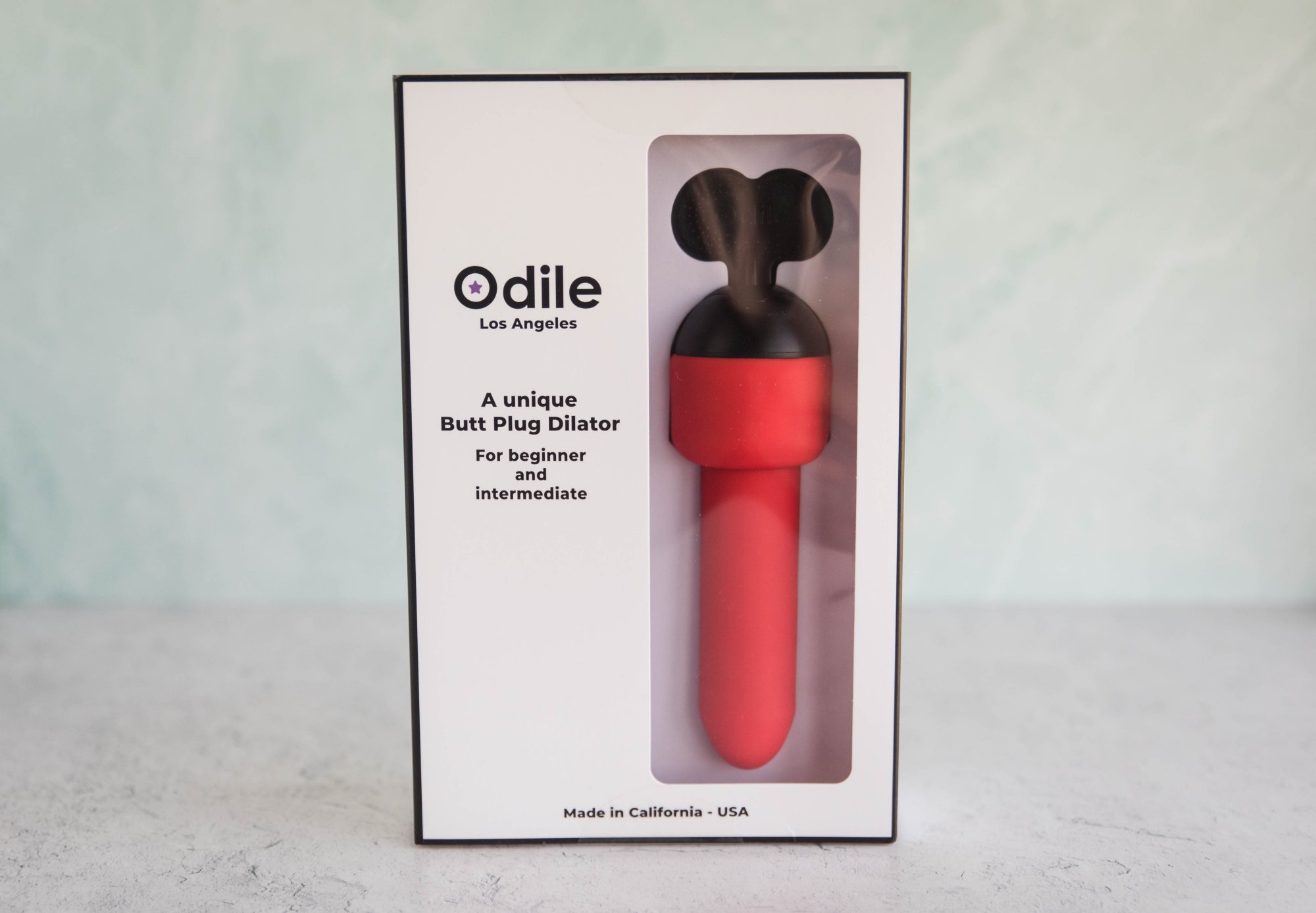 The English is a bit odd in places (it reads like someone who writes technical science manuals instead of recreation reading material), but it provides a whole lot of good information about the Odile and how to use it including: 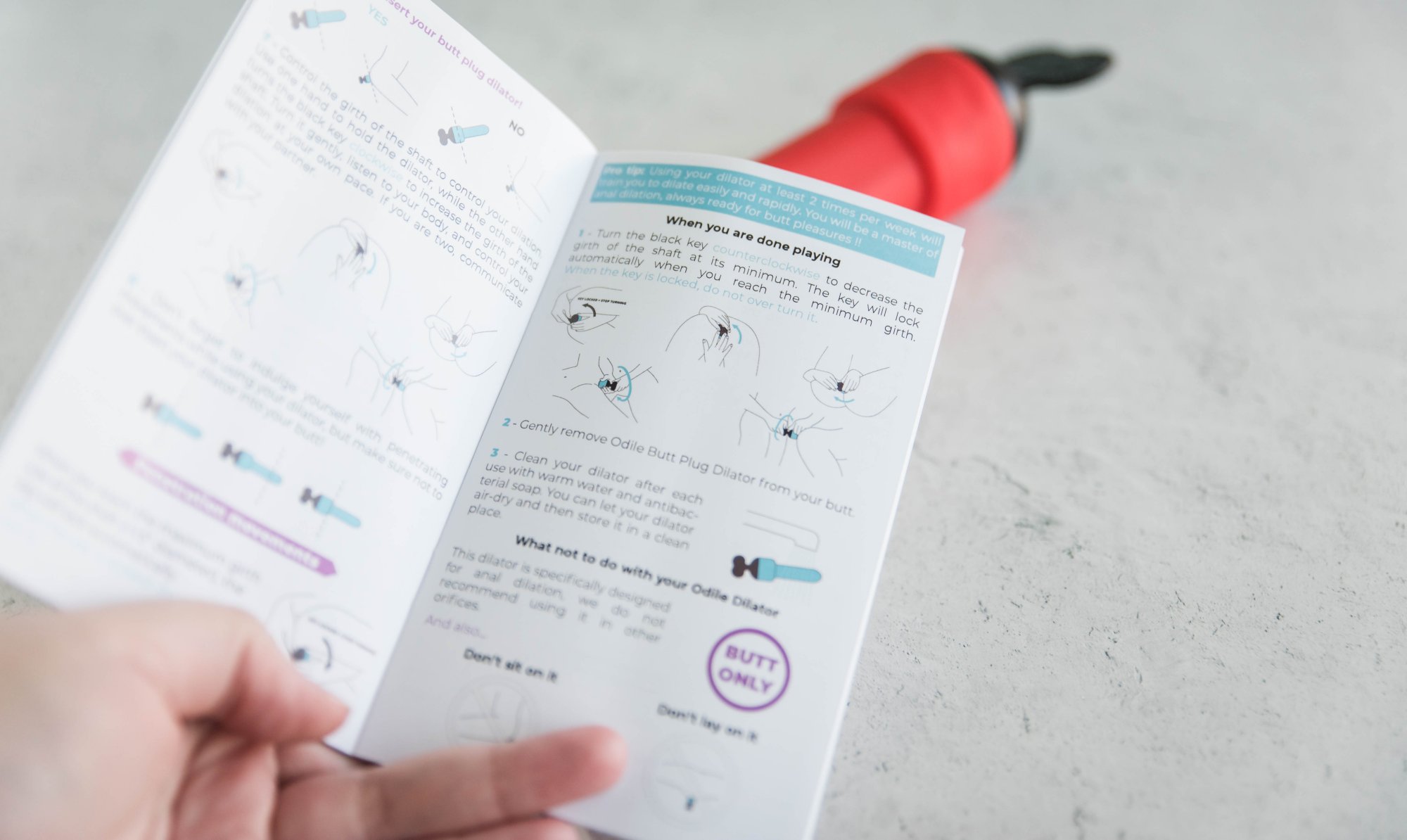 For example, the manual says "For absolute beginners, don't be intimidated by the 1 inch minimum diameter of your dilator as your butt is already naturally trained to take this size".

Assuming anyone's body is "naturally" going to take an entire inch seems pretty presumptuous - especially when some people have difficulty getting a single finger into their butt already.

I feel like some of this might be some possible translation errors, but I think some of it is just attributed to the fact that it doesn't seem like a sex educator wrote the booklet.

Regardless of what you're trying to slide in your holes, the Odile is well-crafted, really innovative, and simple to use. It's made from durable, body-safe materials, and it's pretty much designed to be a "tool" you can use to stretch your anus to the point where you need/want it.

I really wouldn't recommend the Odile if you're regularly taking toys/penises in diameter of over 1.75" unless you plan to be really careful. The lack of a thick flared base at the thickest Odile setting is definitely a slight concern for me - especially if you tend to ride your toys hard. I don't think it's much of a problem for those who are on the beginner side of the spectrum, though.

I do recommend picking up some OhNut penetration buffers to go with your Odile, though, if you're concerned about the base. Those have worked swimmingly for us. 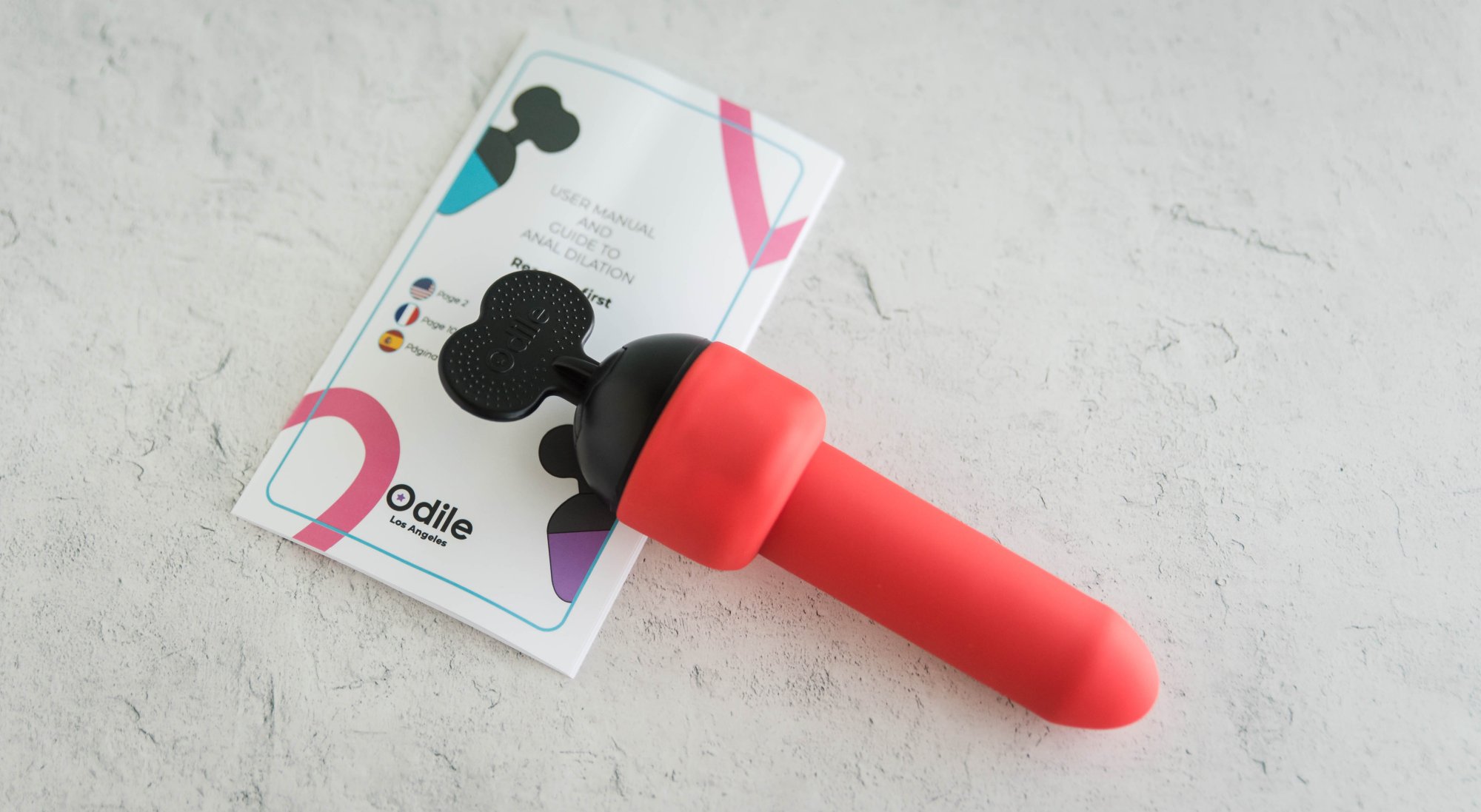 If that's the case, there are other options out there that can fulfill some of the functionality that the Odile does. They aren't quite the same (since they aren't quite the all-in-one option that Odile provides), but they do provide thicker flared bases and are options that can be sat on or multi-tasked with.

After that, I'd recommend the Blush Novelties Dilator Kit. If you're looking for a "pure" dilator experience, this is going to be a good kit to go with. It comes with four separate dilators - all with the textureless, featureless shafts that dilators are known for. The shafts of the Blush Dilator Kit are much more flexible than the shaft of the Odile - which can occasionally make it more frustrating to insert a Blush dilator when it tries to bend into itself.

If lube is always a big thing for you, I'd go for the Cloud 9 Dilator Kit after that. The Cloud 9 kit is the only dilator kit that features hollow, interior lube channels that let you squirt lube into the base of the toy while it's inserted - and the lube will flow out the top of the dilator. Especially if you're someone who likes to leave their dilator inside of the body with minimal movement, having that bonus bit of lube can really help with keeping your internal bits happy.