Reviewed by M. Christian
The Nexus Revo Embrace is a cock ring with pleasure up the wazoo. Literally.

In all my years reviewing sex toys … actually, wait a sec (*checks Google Calendar, does the math*), in the last three years, which is still a respectable amount of time, I’ve never, ever seen anything quite like the Nexus Revo Embrace.

In form as well as function, unique doesn’t come anywhere close to describing it. But this is not a bad thing. If you sport a suitable set of biological features for this toy and get off on a pair of rather precise sexual sensations, then I’d call the Nexus Revo Embrace a (wet) dream come true.

You could call the Nexus Revo Embrace is a chocolate-and-peanut-butter kind of toy: two great things even better together.

The peanut part is its vibrating and rotating prostate massager, with the chocolate being the cock ring component. Put them together, and it’s sexually yummy.

Though this combo—and I promise not to use this metaphor anymore—could be great for some, some folx prefer their chocolate without the peanut butter (or vice versa.) In this case, for those who prefer either a cock ring or a prostate massager, you'd be paying for a feature you’ll never use.

But as I happen to have a drawer full of cock rings, plus more than my fair share of prostate massagers, I’m pretty much an ideal person to test drive the Nexus Revo Embrace.

So here’s everything you probably need to know about this fascinating new toy: its benefits, its drawbacks, and if you should add it to your sexy-time activities.

My initial reaction to the Nexus Revo Embrace was that it was a far-too groovy raygun that’d escaped from the set of a European sci-fi movie or a David Cronenberg production.

But in the case of this toy, looks are everything, as its shape reflects not only precisely what it is and how it’s supposed to be used, but also the care and intelligence behind its design and manufacture.

How to Build Your Own, Customized Strap-On Kit

For example, the anal-insertable end is big but not too big: walking that fine line between too much for beginners or not enough for long-time enthusiasts.

From there, the Nexus Revo Embrace arches forward a perfect distance to reach the base of the user’s penis. By the way, applause for the inclusion of a little textured area that adds a nice bit of extra stimulation to the testicles.

At the end of this arch are the cock rings, again thoughtfully designed with one on the larger side and the slightly smaller second ring. This way, cock ring veterans as well as newbies, or those who like them on the less-than-tight-side, can enjoy the toy.

Mechanics-wise, the Nexus Revo Embrace has two motors: a 6-mode vibrating part housed in that textured area below the cock rings, and the other that gently rotates the prostate part. The latter offers two speeds, with the extra benefit that it can be run clockwise or counter.

I didn’t use the word unique about the Nexus Revo Embrace lightly, as our Kinkly shop only has one other toy that sort of, kind-of comes close to it—which I get into in the Other Options section below. But it does have a compadre in the Nexus Simul8.

The difference between the two Nexus toys is that though both have the same on-toy controls, one for power and the second clicking through the available vibration options and the speed and direction of the prostate massager’s rotations, the Nexus Revo Embrace is also packaged with an extremely-well designed remote control so users won’t have to do any unnecessary between-the-legs fumbling to get the toy just right. 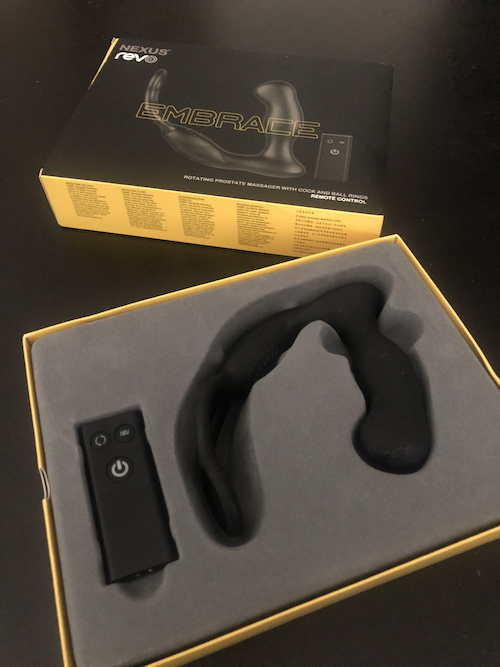 Aside from getting off on its distinctive shape, when I got around to using it, my first thoughts ran along the lines of “how the hell am I supposed to use this thing?”

Not to get too graphic with it, I found the best way was to start with the cock ring first before proceeding to the prostate component. Though not enough to be considered a strike against the Nexus Revo Embrace, it’s worth mentioning the rings are on the stiff side compared to the stretchier rings I’m used to. Though once on, it was utterly comfortable.

I also should mention that during my initial test-drive, I noticed that the Nexus Revo Embrace doesn’t have an auto-off function, meaning that unless you remember to power it down, the battery drains pretty fast.

Not a deal-breaker, but something to note is that it takes 75 minutes to charge for the same amount of playtime. So juicing it up is quick, but it's not so great if you like your play-sessions to last longer than an hour and fifteen minutes.

Once inserted into it, and then inserted into you, the sensation is remarkably pleasant: the vibrations traveling very well up and around the cock rings, but not enough to unpleasantly numb with the prostate rotations perfectly tickling that interior sweet spot.

A big, bold check-mark in the Nexus Revo Embrace’s favor is its versatility. Unlike many other sex toys, it leaves the user free to engage in practically every other kind of sex play, including penetrating a partner or receiving oral sex.

Staying with kink, its freedom of access to the penis makes it ideal for anyone who likes CBT. (Cock and Ball Torture for those unfamiliar with kink nomenclature.)

If you like surreptitious sex games, then you’re in luck as the Nexus Revo Embrace’s motors are pleasantly quiet, so there’s little risk that anyone might accidentally hear what’s going on below the belt. The control also has a nice, if not great range, though I haven’t investigated if clothing might get in the way of its signal.

Then there’s that the toy and the control are waterproof: ideal if you like getting frisky in the shower, the tub (jacuzzi or otherwise), or get turned on by other forms of water sports. 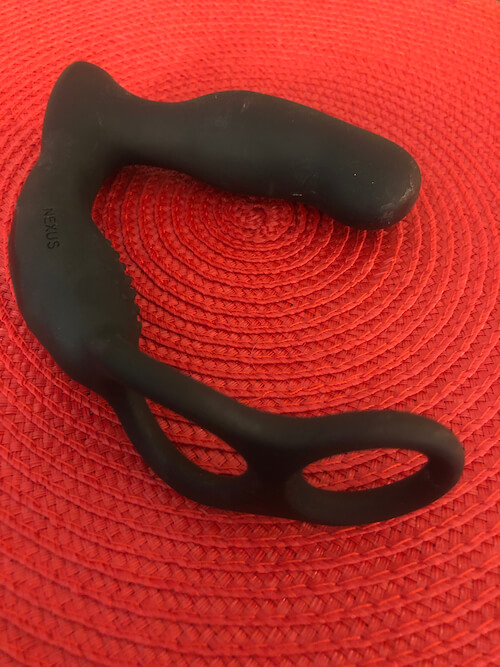 The Nexus Revo Embrace is made of food-grade silicone; its overall length is 5 inches long, with the anal-insertion part 3.78 inches, and 1.3 inches in diameter at its largest.

Though not provided by the manufacturer, using a tape measure, the cock rings’ smallest is ¾ inches in diameter. The larger coming in at 1 inch. I could stretch both rings to at least double this diameter.

On the light side of sex toys, the Nexus Revo Embrace can comfortably be used sitting, standing, lying down, or even walking around. When operating, the only noticeable noise is the vibrating component, but it’s so highly pitched as to be nearly inaudible.

For lubrication, never use silicone-based lube as it’ll react to the Nexus Revo Embrace’s silicone covering.

I recommend a good all-around one, like Sliquid Sassy Lubricant.

The toy itself has two buttons. When held down, the bottom powers it on or turns it off and cycles through the Nexus Revo Embrace's three vibration speeds and then its three pre-set oscillations.

The upper button operates the prostate massager, offering two rotation speeds and two rotation directions, providing 34 combinations all together to play with.

In addition to the prostate massage and vibration buttons, the wireless controller also has a stand-alone power one.

Charging is done with the included USB cable, which magnetically attaches to the Nexus Revo Embrace and its controller.

Before going on, I want to take a moment to say how completely and utterly cool the rechargeable controller is. Seriously, this should be an industry-standard as there’s nothing worse than eagerly anticipating playtime with your favorite toy only to discover its remote’s batteries have died.

Cleaning the Nexus Revo Embrace is a breeze: just apply a good anti-bacterial soap and some warm water, dry it thoroughly, and you’ll all done.

Never use anything with either alcohol or acetone as, like with silicone-based lubes, it can react with the toy’s silicone outer covering. To store it, you can put it back in its well-designed packaging or an opaque plastic or cloth bag.

As mentioned, the Nexus Revo Embrace takes 75 minutes to charge for the same amount of use. Though it doesn’t come with a wall charger, any USB one works fine.

If anything goes wrong, the toy comes with a one year warranty activated on the day purchased. So be sure and retain your receipt.

The Nexus Revo Embrace comes with the toy itself, the remote control, the USB charging cable, and a well-written--and in large enough type to be actually readable--instruction manual.

Alas, though that manual mentions it’s included, mine didn’t have a storage pouch. Fortunately, the box it comes in is well-made and attractive, with inserts for the toy and the remote. It is a little … fuzzy, however, so if you use the original packaging for storage, you might want to clean the toy before using it.

But that’s not the only reason I’ve been waxing poetic about this delightfully stimulating toy. Being able to scratch these two unique sexual itches is one thing, but what’s better is that the Nexus Revo Embrace does both so well: the cock rings, while on the tight side, were clearly designed and built by folx well-versed in the pleasures, and potential headaches, of using them.

Same and more with the prostate massager, showing Nexus is similarly well-versed in what can separate a mediocre toy from a superb one. While using, and very much enjoying the Nexus Revo Embrace, I kept wanting to applaud its development team for their due-diligence, their thoughtful designing choices, and no doubt their smiles as big as my own when they took their new product for a spin.

That said, I gave the Nexus Revo Embrace four out of five. The one star short of perfection as though it’s excellent in design, the construction side falls somewhat short.

The major is its one-to-one charging-to-playtime ratio, which had me watching the clock to make sure I’d finish before the battery ran out. As I said above, this is made worse by the toy lacking an auto-shut-down mode, with forgetting to do this manually, leading to an unpleasant delay in using it.

Then there’s the charger (sigh). Yes, magnetically attached chargers can be great, but only when the magnet is strong enough to make and keep it connected. Out of politeness, I won’t share the profanities I spewed trying to get the blasted thing to stay attached--and then when I did, the smallest bump would knock it off. In a word: GRRRRRRR.

All this aside, I’d still have high praise the Nexus Revo Embrace. It’s well-made, well-designed, and--for the most part--well built and ideal for anyone who relishes the thought of penis restraint as their prostate’s simultaneously tickled.

Like that, the B-Vibe Snug and Tug has a cock ring and an anal-insertive part. But their similarities end there.

But after all this, you want to try out this same-but-different toy, if only to experience variety in how each approaches this kind of play, it may very well be worth your while, and your dollars to give the B-Vibe Snug and Tug a whirl.