It makes sense why this habit gained prominence during widespread lockdowns: The line between most people's work and personal life became blurred while life simultaneously became more stressful. Unique opportunities alone in a bedroom, home office, garage or other private space provided ample opportunity, and increased levels of stress force the mind and body to seek relief.

According to a usage report from Stripchat, a live-streaming sex cam site, approximately 74% of users logged into the site between 10 a.m. and 6 p.m. during the pandemic. The most popular hours were between 3 p.m. and 4 p.m., when 90% of users would be active at once. It is also worth noting that the cam site reported 90% growth users in 2020 alone. The reason for this spike? The report attributes working from home for the dramatic increase, stating:

"Men who work from home added one more favorite tab to their browsers finding a better way to relax and interact during lunch…and before…and after their working hours. Women were not left behind, following their desires and spending more exciting time on Stripchat in 2020.”

Men accounted for 71.6% of visitors on the Stripchat in 2020 and women accounted for 28.4%. According to the website's usage statistics reports, the same usage patterns have continued into 2022, while the use of mobile devices to visit the site has increased.

As stay-home mandates have eased, some pleasure-based companies have begun to allow breaks during the day for solo time as they've found it has created a positive effect on productivity and morale. 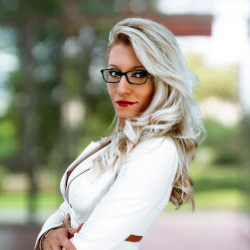 Based in California in the L.A. area, Dr. Tiffany "K." (she, her, they) is a Certified Holistic Sexuality Educator (CHSE), Board-Certified Sexologist, and Intimacy Consultant who specializes in kink education and D/s dynamics. She also holds an Ed.D. in Education and M.A. in English Literature.

Her research has been published in scholarly journals, with non-fiction and erotica works published since 2016. Her work has appeared in American Popular Culture, Men’s Health, NCSFReedom.org, The Science Publishing Group, and more.

In addition, she hosts The Submissive Next Door Podcast which brings a down-to-Earth approach to D/s dynamics and kink through scholarly research, communication, consent, and safety practices, and the More Than Sex Podcast with a focus on sexology from historical, literary, and scientific perspectives.