Kinbaku and You: A First Timer’s Foray Into Rope Play

Part of:
ALL ABOUT ROPE BONDAGE
by ANDY MACDONALD
Published: NOVEMBER 20, 2018 | Updated: FEBRUARY 10, 2022 12:03:50
How is that simply tightening a knot can send both partners into a fleeting moment of bliss?

I am in no way an adventurous person. Ask anyone who knows me to describe me in one word, and they would probably say “Um ... punctual?” It’s something I’m working on. I WANT to be the rule-breaking, leather jacket wearing, chain-smoking bad boy your parents hate. My first step was going to Burning Man, which went about as well as you’d expect. Imagine a polo-shirt-wearing youth pastor suffering a mild stroke in a sea of fireballs, unicorn onesies, and fake fur and you get the picture. My second step was attending a Kinbakuclass. Kinbaku, for those who don’t know, is a Japanese form of rope bondage.

When I first got this assignment, I spent many sleepless nights panicking about finding someone to go with. “Hey, wanna spend a couple hours getting tied up?” was not a question I wanted to ask anyone. Finally, I posted about it on Facebook and a friend of a friend I’ve had MAYBE five minutes of interaction with replied with “Awesome.” Seeing an opportunity to strike, I messaged her fully expecting a “GROSS, GO AWAY WEIRDO” and instead got “OMG I totally would!” Phew. Let’s say her name is Diana. She’s probably reading this. Hi, Diana!

Fast forward to the day of the class. Diana and I meet up and walk up the stairs of an unassuming building in Koreatown. Buzzing with more anxiety than my usual default state of being, my mind races with worst-case scenarios. Am I walking into a dungeon full of leather-clad ninjas waiting to hogtie me and sell my kidneys? Are my kidneys healthy enough to fetch a fair price on the black market? What IS the going price for a kidney? WILL MY MOM BE THERE?! I NEED AN ADULT!

We enter the studio, ushered in by a tall, gentle, bearded man named Doug. It isn’t the dark, musky, pit that haunted my dreams. Instead, we are greeted by a brightly lit room containing a massive structure that I can only describe as a BDSM Crossfit gym. Thin, harsh-looking ropes dangle from bamboo beams. Doug tells us about the first time his landlord saw it. “It’s not attached to the walls, so basically it’s a big piece of furniture,” he says. Various pictures and paintings of women bound in incredibly complex and strangely beautiful knots adorn the white walls. They do not look comfortable. None of this helps my pre-bondage jitters.

With the rest of the class gathered, Doug gives us a short intro. Doug reminisces about being a small child and very slowly downloading pictures of bound women off of message boards that a child probably has no business being on. Ever since, he’s had a fascination with Kinbaku that led him to travel to Japan and gain only one of 15 teaching certificates Grandmaster Yukimura Haruki in the world. He’s the real deal.

Read: The Ins and Outs of Rope Bondage

The history lesson concluded, it is now time to get weird. He hands out rope to everyone. Before tying any knots, we all turn to our partner to ask them if they’re cool with this. Consent is a must, folks! I turn to Diana and sheepishly ask, “So uh … can I tie you up?” Seeing my heart jump through my throat when asking, she laughs and says yes.

Alright. OK. Deep breaths. I got this. I’m a hip, open-minded dude! I stay up past 10p.m. on weekends and I’ve been to, like, two and a half raves! This is nothing. Our first knot, a simple wrist bind, isn’t too bad. I fumble through it my first couple times. Every time I get to the point in the knot where I have to slide the rope between her hands, I say “Beep, beep, coming through!” because I am HILARIOUS and in no way on the verge of a heart attack. After a couple tries, I got the knot down. I’m officially ready to be a sexy fisherman.

The next knot is elaborate, to say the least. It involves wrapping the rope around the breasts and binding their arms behind them. Wonderful. Can’t we just stick to wrists? Game face on, I gently wrap the rope around her. Doug approaches me and says Diana would probably enjoy it more if I wrapped her more forecefully. She immediately says, yes, yes she would. Part of me starts to wonder if Diana has a bit of experience in this I didn’t know about. Anyway, being the classy gentleman that I am, I honor her wishes and jerk the rope across her chest and around her back. She lets out a deep sigh as her body melts into the rope. I continue with the knot. “Tighter,” she says. As I tighten the ropes I see goosebumps form as she melts deeper and deeper into the knot.

Phew. OK. I think I get it now. Also I need a cigarette and a cold shower.

This is certainly one way to supercharge a new friendship. Despite not knowing her for too long, I feel like Diana and I already have a deep foundation of trust. How can you not after that? And that is the thing that surprised me the most about Kinbaku; it’s not about pain and humiliation. It’s about absolute trust and subtlety. The way that slowly dragging the rope across your partner’s skin communicates more than words can ever say. Or how simply tightening a knot can send both of you into a fleeting moment of bliss. If you’re looking for a unique date you and your partner won’t forget, this is it.

As for me? I gotta go loiter in front of a no loitering sign in my continuing quest to be a cool bad boy. Maybe tie up a cop who gives me any trouble. 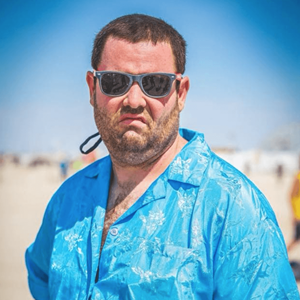 Andy MacDonald is a freelance writer on a journey to proudly let his freak flag fly. When not submitting himself to painfully awkward situations so he has something to write about, he is secretly sabotaging the career of professional skateboarder Andy MacDonald in the hopes that Google will someday recognize him as the top MacDonald.