I Studied Sex Toys at University - Here’s What I Learned

Ten years ago, I was studying product design at England’s Portsmouth University. For my second year project, I was asked to study an electrical product of my choice. The idea was to study its history and analyse its design, materials, target market and production process, then propose ways to improve it. Other students in the class chose items like power tools, automatic umbrellas, and laser pens. The idea of spending months working on something so dull bored me to tears. I wracked my brains for something better to do, when my professor made a joke that would change everything. “You can study anything you want, even a vibrator!” So I did.

I’m a big fan of vibrators (isn’t everyone?), and I figured I would do a much better job if I studied something that interested me. Plus, not enough research is done on female sexuality. So, I was happy to use my project to do that. It ended up being fascinating, not only because of the research I did for it, but also because of the reactions it garnered from the people around me. I wrote 5,000 words, learned a lot, and took great pleasure in making men uncomfortable along the way. In the end, the project became something of a legend at my university. Here’s how it went.

6 Things I Learned from Studying Vibrators

The First Vibrators Were Pretty Scary

These days, vibrators come in all kinds of sleek and sensual designs. However, the earliest forms of this magical product weren’t quite so easy on the eye. In fact, they resembled power tools more than anything else. They were huge, bulky contraptions, which were often so heavy and complex that they had to be carried in cases. Some were hand-cranked, while others plugged into the mains. No woman these days would want to put any of them near her vagina, that’s for sure.

They Were Used by Doctors to Treat Women for ‘Hysteria’

While vibrators are now found in most women’s bedside cabinets, they were originally placed in doctor’s offices. This is because doctors used them to administer orgasms as a form of treatment for what was then called ‘hysteria.’ During the 1800s, it was generally believed that women didn’t experience sexual pleasure. Of course, this left women frustrated, and they would visit a doctor to get some relief for their ‘symptoms,’ which included insomnia, nervousness and irritability. Until vibrators were invented, this procedure was carried out by hand and could take quite some time. Rather than being invented for women’s sexual pleasure, vibrators were originally created for the convenience of doctors.

The Rabbit Is a Timeless Classic

Some Men Are REALLY Freaked Out by Female Sexuality

There is No Other Way to Say ‘Clitoral Stimulator’

I lost count of how many times I had to write the words ‘clitoral stimulator’ throughout my report. Whether I was labeling diagrams or discussing design changes, there was no way around it. I tried valiantly to find some other ways to say it, but words failed me. There was no way I could make that term more formal or less sexual. My professor just had to deal with reading those words over and over again. I’m sure that only added discomfort, but I was OK with that.

When it was time to submit my project, my professor insisted I marked it for his attention so that no one else would grade it. He was visibly worried about other people finding out about what I studied. However, it later became a source of pride instead of embarrassment. At the very least, it made a great conversation starter. A few years later, a friend of mine overheard him giving some prospective students a tour of the university. “One of our students even did a project on vibrators!” He smiled when he said it. At the time, it was something to be swept under the carpet and talked about with hushed voices. Now, it’s something that’s proudly used as a talking point with potential students. I’m glad I made an impression. 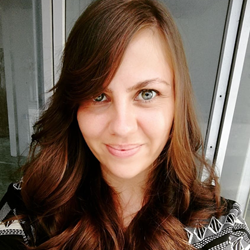 Emma Thomas is a sex-positive writer based in Bangkok. You can read more of her writing on her blog, Under the Ropes.