How to Have Spiritual Sex During Your Period

by KATE ORSON
Published: NOVEMBER 25, 2021
Presented by INTIMINA
The time of your period is a physical reminder of your connection to the Earth and the Moon. It can be a powerful time and perfect for exploring spiritual sex.

Ancient biblical law has a lot to answer for. In Leviticus 15, (a book in the Bible and in the Torah) it is said that "when a woman has her regular flow of blood, the impurity of her monthly period will last seven days, and anyone who touches her will be unclean till evening."

Perhaps the cultural influence of these religions explains why many of us people with vaginas carry residual shame around our periods, and having sex while menstruating. In reality, having sex during your period can be normal, natural, and even a sacred act between you and your partner.

Read: Sex for the Soul: Tantric Exploration for Beginners

In The Women's Encyclopedia for Myths and Secrets, Barbara Walker explains how in many ancient cultures period blood was actually considered to be sacred, and pure. Women were believed to be magic for their ability to bleed without dying, and so the blood was considered a sign of feminine power, and strength.

Ancient cultures the blood was used in rituals to help heal the sick. Gnostic Christians (a form of early Christianity), drank menstrual blood for it’s renewing and regenerating properties.

Menstrual blood is associated with life-giving properties, and a number of ancient cultures consider it to be the source of all life. For example the Native Americans of South America said that mankind was made of moon blood in the beginning. In ancient Mesopotamia it was believed that humans were made of clay and then infused with blood to give life.

Modern science is now catching up with the wisdom of Indigenous societies. Research has found that menstrual blood is composed of stem cells and there is the hope that in the future it could be used for healthcare, just as it was in the past.

A simple ritual to explore the power of menstrual blood is to give it back to the earth. A Hopi tribe prophecy says that "When the women give their blood back to the earth, men will come home from war and earth shall find peace." This quote shows the power behind a substance that many of us have perhaps considered an inconvenience, at the very least.

Menstrual blood contains the minerals nitrogen, phosphorus, and potassium which can help plants to flourish. Collect blood with a menstrual cup, such as the Ziggy cup. Dilute it with one cup of water. Set an intention for this ritual. Perhaps a new vision, dream, or something you would like to be healed or restored through the magic of the blood. Pour the liquid into the earth around a plant or tree. You might like to repeat your intention out loud as you do so.

This practise can help you connect with the sacredness of your cycle, and let go of any shame surrounding it. Giving blood to the earth is also purported to help you to feel more grounded, rooted to the earth and connected to life and nature. Some women have even reported that it has helped them connect with their fertility.

Sex during your period is a personal choice but one thing is for sure, it’s not something to avoid because of shame and the feeling of being "dirty." Because of cultural influence it may feel a little taboo, but this can actually add to the feeling of being turned on. If you or your partner really want to avoid the "mess" the Ziggy cup is the perfect option for period sex.

Read: How to Have Period Sex - With No Mess

Nature definitely seems to have designed our bodies to enjoy intercourse during menstruation. An article in Heathline explains how the contraction and release of your muscles during orgasm can offer relief from menstrual cramps. Orgasm can also help the blood to be released from the uterus faster, resulting in shorter periods. Period blood offers extra lubrication and libido can be higher at this time of the month.

Sex during your period can be a time of deep bonding between partners. It can feel incredibly shame-busting to be accepted in all the realness and messiness of your blood. On a spiritual level, ancient cultures, believed that intercourse was a way to connect with the magical, life-giving properties of the blood. In Menstruation Across Cultures: A historical perspective, author Nithrin Sridhar shares how in Tantra it’s believe that higher states of consciousness can be reached through having sex during menstruation.

Connect with your body during your moon time. What kind of touch do you most desire? Energetically, menstruation is a time of releasing and letting go. It may be that fast, heavy thrusts, pushing upwards are the opposite of what you need. To connect with the magic of the blood you might want to try spiritual sex, focusing on slowing down and feeling every sensation. Perhaps with the person with a vagina on top, controlling the speed and pressure. If you are experiencing cramps then spooning, or any position that facilitates more shallow penetration can feel good. The good old-fashioned missionary position can be a way to rest, and completely let go.

Read: 7 Positions That Are Great for Period Sex

Everyone is different, and you may feel different at different points of your bleed. Ask your body what kind of touch you most desire, and connect with your innate wisdom before letting your partner know what would feel amazing. This is a time to be worshipped as the divine goddess you are.

You could try gazing into each others eyes, and taking slow deep breaths in unison. Resting in stillness with the person with a penis inside your vagina can be amazing. How long can you tease and tantalize each other, with gentle, millimetre like movements before picking up the pace?

Embracing the blood, and putting some towels or easily washable blankets on the bed can be helpful. There’s no shame being a woman who bleeds but if you do need an option that doesn’t involve clean up, you could try a menstrual cup like the INTIMINA Ziggy cup which is designed to be used for during your period.

Our monthly cycle may come with it’s negative side effects, pain, tiredness, and discomfort, but embracing the spiritual nature of this time, can help to embrace this time and notice the magic as well as it’s challenges. 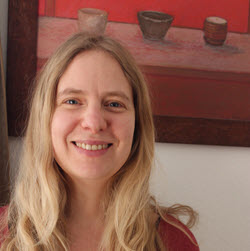 The Follow Through Position
Try This Position
View More Positions