by MISTRESS KAY
Published: MAY 17, 2021
Presented by KINKLY SHOP
Put your orgasm on turbo with the vibrating, rotating FemmeFunn Vortex Wireless Turbo.
Table of Contents

The FemmeFunn Vortex series takes everything I enjoyed about that old-school design - but with the quality and body-safe design we expect from our toys nowadays. Not only that, but as the Femme Funn Vortex series offers three different toys, you can pretty much "pick and choose" your favorite design of the three - and all of them will include that unique rotating head too!

All three varieties come with a wireless remote control (to easily control the toy during use - no awkward reaching or pausing of the action required!) a Boost button (to instantly increase the intensity to really push you over the edge!), a rechargeable and waterproof design, and 8 pleasure modes of vibration mixed with rotation.

So let's dig into it. 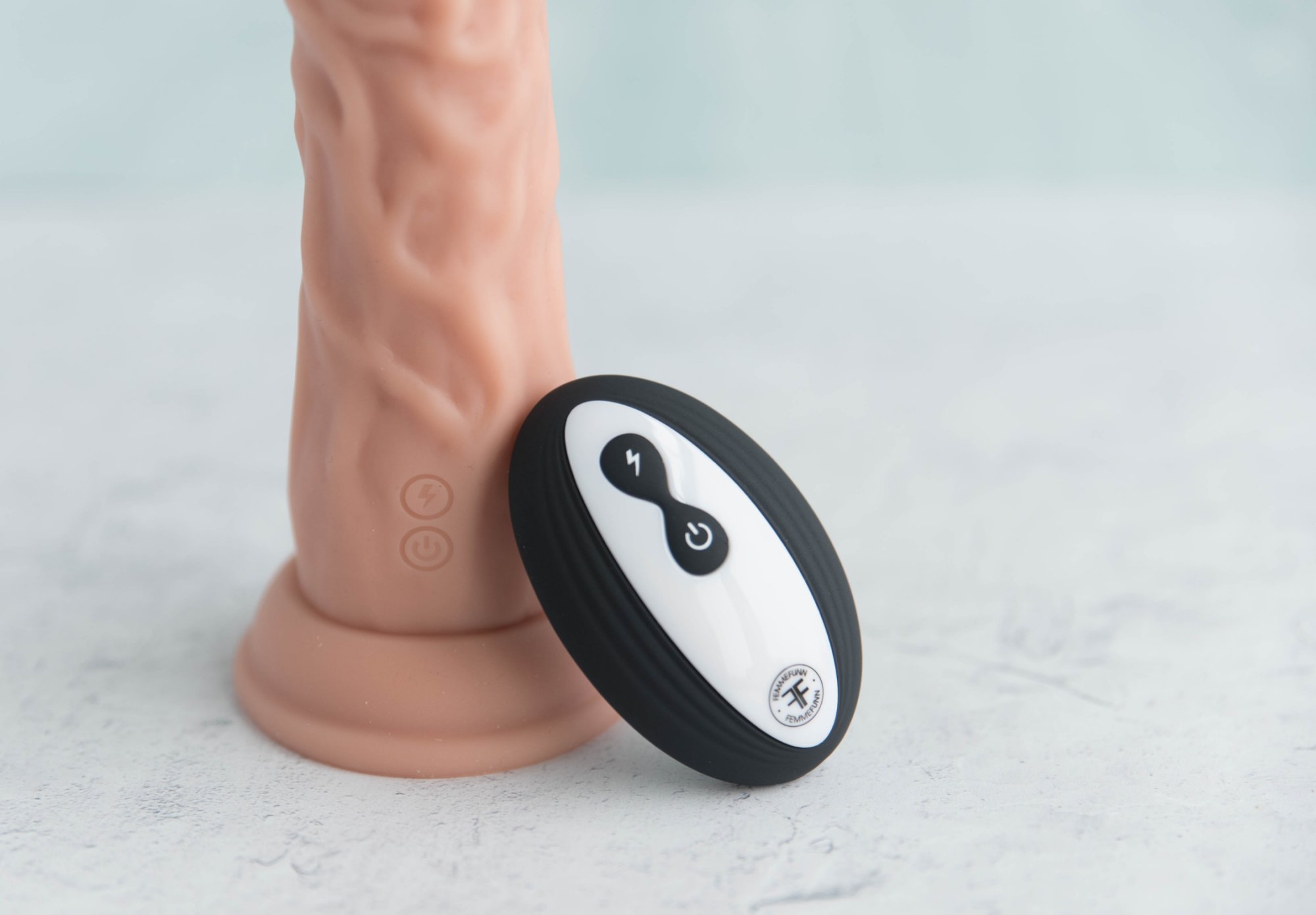 The buttons on the remote provide a nice, satisfying "click" that lets you know that the command was executed - even if you can't hear the buzz of the toy or aren't the one feeling the sensations. The two pair well together in seconds - and I even managed to pair them fine when I couldn't find the instruction manual: just press and hold the power button on both of them, and then they seamlessly talk to one another. It's a very simple, pleasant experience - exactly how remote control should be.

One of my biggest concerns with any rotating toys like this is if the motor jams. I've had some seriously terrible rabbit vibes where the rabbit's motor jammed up as soon as I clenched because I was enjoying myself. The FemmeFunn Vortex can fall victim to that too, at the lower settings, but it's mostly a fixable problem. There's one point along the mid-point of the shaft where tight pressure can cause the motor to slow down. However, if you experiment with depth (penetrating less or further in) it can help move this jam-sensitive area away from the strongest muscles at the vaginal opening. 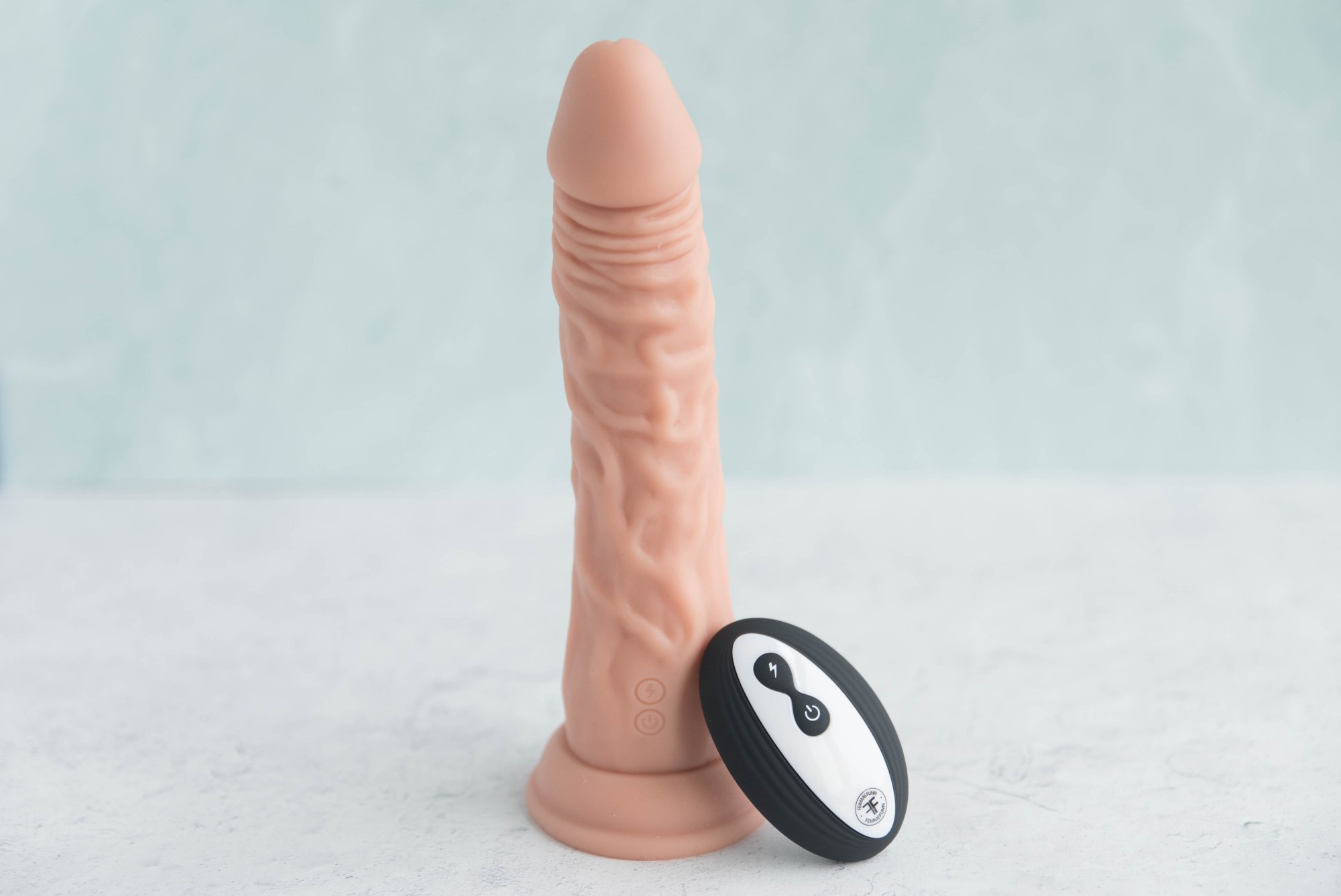 I'd have to guess the Turbo is a temporary (10 second) setting because it's too taxing on the mechanical parts to be a constant setting - otherwise, it's kinda odd that it isn't a constant setting. You can keep pressing the Turbo button as much as you want (if you need it), but it definitely seems to be designed for a temporary, 10 second boost of intensity. And for that, it really works. If I'm having problems getting over the edge, that's pretty much a guarantee to get me there. (Now I'm really imagining an air suction vibrator with something similar. That sounds glorious.)

With your fingers, the Vortex Wireless Turbo Shaft is actually a bit plushy. You can easily squeeze it between your fingers, and it has a lot of give. It won't bend - at all - but the outer layer of softer material will squish around your fingers.

True, you can hold it in your hand - the suction cup base makes that easy. But where the Wireless Turbo Shaft really excels? Strap-on harness use. The harness-compatible base, body-safe material, AND the fact it offers rotations and easy-penetration means there is pretty much nothing else like it in the sex toy sphere. While the other Vortex toys can be strapped on, they're a bit harder to strap-on whereas the Wireless Turbo Shaft's lack of testicles and extra arm attachments makes it slide into a harness easily.

If you're not into using the suction cup or want a bit more "reliability" with something that's not dependent on suction, the FemmeFunn Vortex Wireless Turbo Shaft (and its testicularly-enhanced counterpart) are perfect for use with Liberator sex furniture like the Liberator BonBon. They can slide inside the shape to easily be held in place without worrying about the suction cup's power.

The FemmeFunn Vortex Wireless Turbo Shaft was clearly modeled after a biological penis. It's a little bit more of a caricature of a human penis - since I don't think I've ever seen so many seriously pronounced veins with sunken skin around them on a penis ...ever. So, I'd say "inspired by" a biological penis more-so than necessarily being entirely realistic. 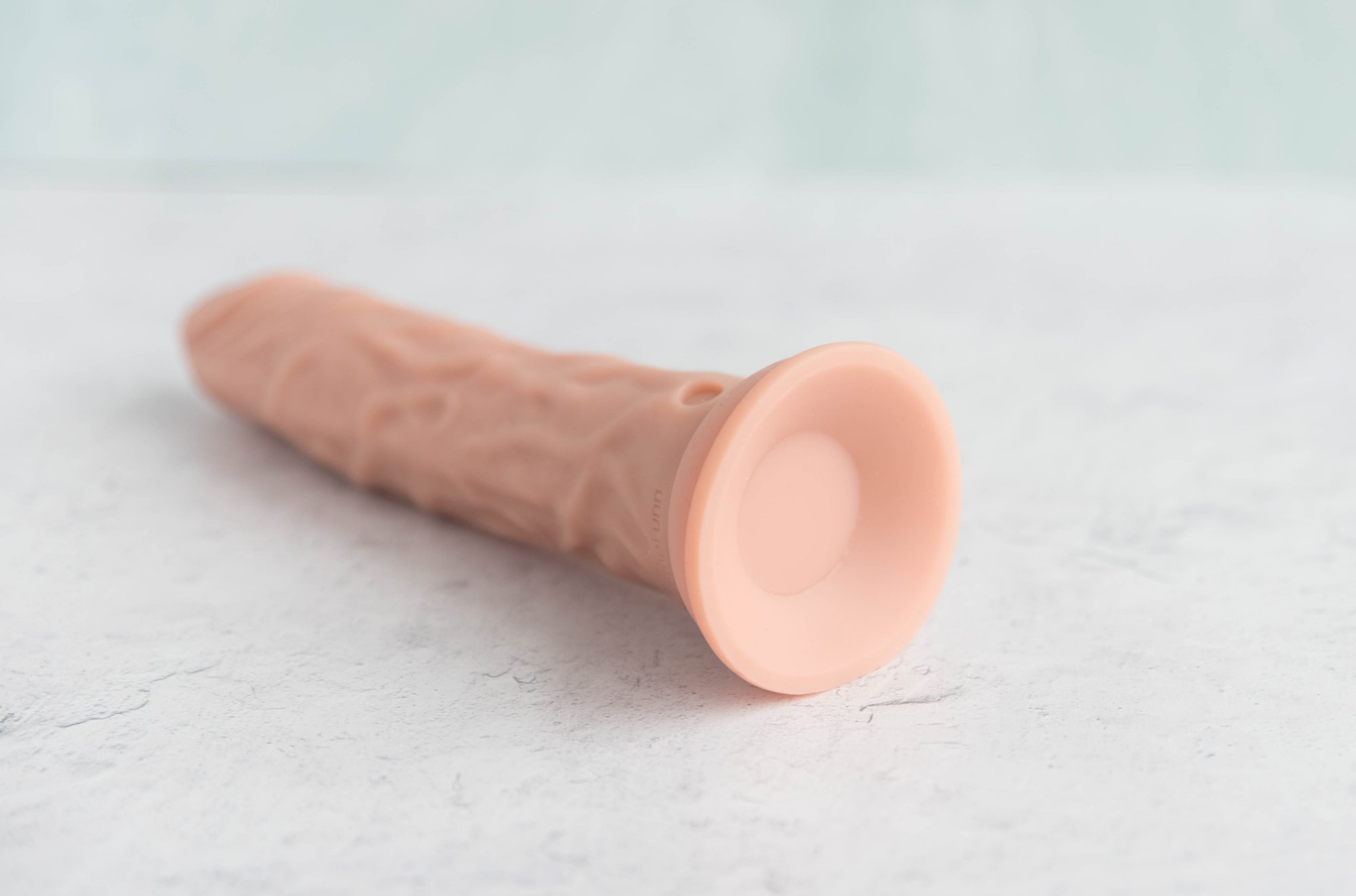 The vibrations are really not as powerful as most vibrators - but you presumably didn't pick up the FemmeFunn Vortex on vibrations alone. The vibrations seem like they're designed as a complement to the rotations rather than a shining star on their own. Vibrations seem to be centered about 3" from the tip of the dildo - around that area underneath the faux folds of skin near the head and right inside of the base of the rotating tip. The vibrations are pretty middle-of-the-road vibrations, and if they were unpartnered with the rotations and the insertable-design of this toy, I'd say that they probably aren't strong enough for most people to achieve clitoral orgasms with them. Since they're inside of a rotating toy designed for penetration, that's not nearly as important.

To control these sensations, you have two options: the remote control or the buttons built into the shaft of the Wireless Turbo Shaft.

This is where FemmeFunn went for pleasure over functionality. The two buttons on the shaft of the Wireless Turbo Shaft are REALLY in there. Essentially, it looks like FemmeFunn wanted to prioritize having a super-squishy, super-soft sensation throughout the entirety of the dildo - all the way, as much as possible, to the base. So this means that the control buttons - which are not below the base - are hidden underneath what feels like a good half-inch of squish-to-press material. This means pressing these buttons isn't the easiest feat in the world. It isn't necessarily taxing on the finger (looking at you, Thump-It plug!), but it's just hard to get the exact spot where the button is located - especially if your fingers or the toy were lubed because the buttons are located within the insertable area. 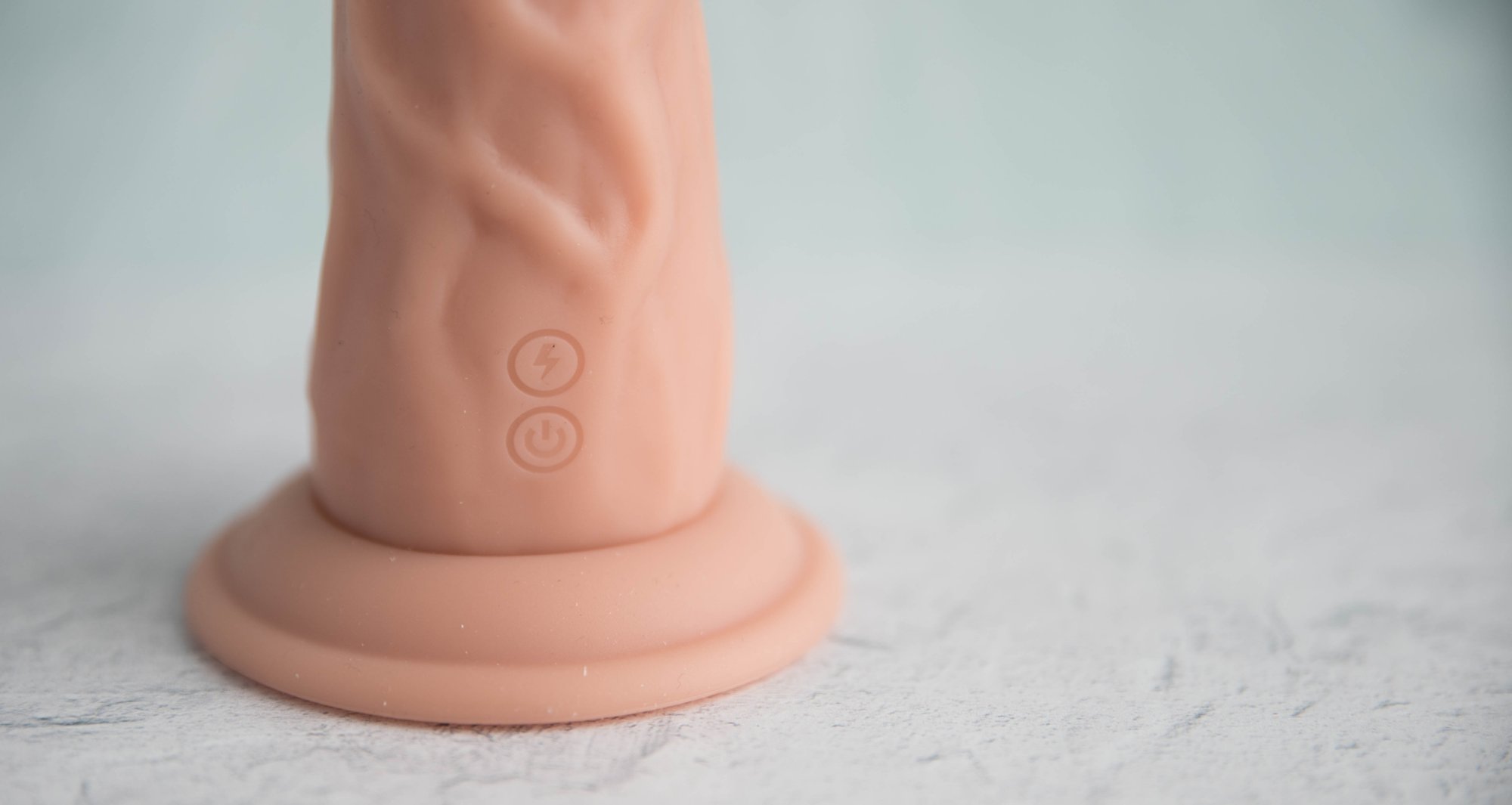 With a waterproof design, this FemmeFunn rotating dildo is actually pretty simple to clean. You just need warm water and a mild, silicone-safe soap (most mild hand soaps work fine). Rinse it, remove all particulate, then scrub it with the soap. Since the Wireless Turbo Shaft is particularly textured, make sure you really get into the nooks and crannies of the toy - the "skin" folding near the head really requires some good attention to make sure you get it thoroughly cleaned. If you're a lazy ass like me, you can also cover the Wireless Turbo Shaft with any standard condoms. You'll still want to clean it when you're done, but you won't need to worry about being nearly as thorough. 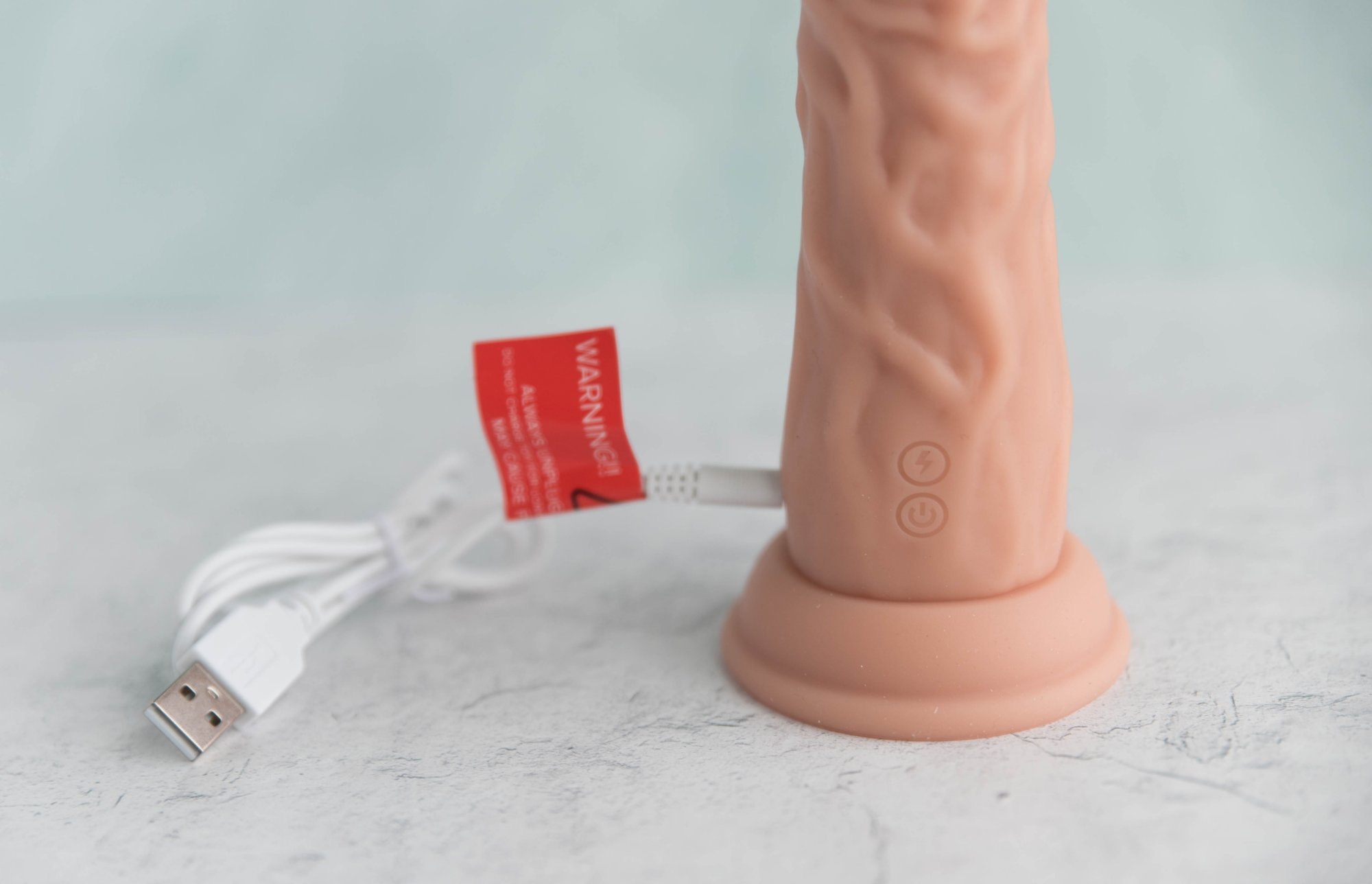 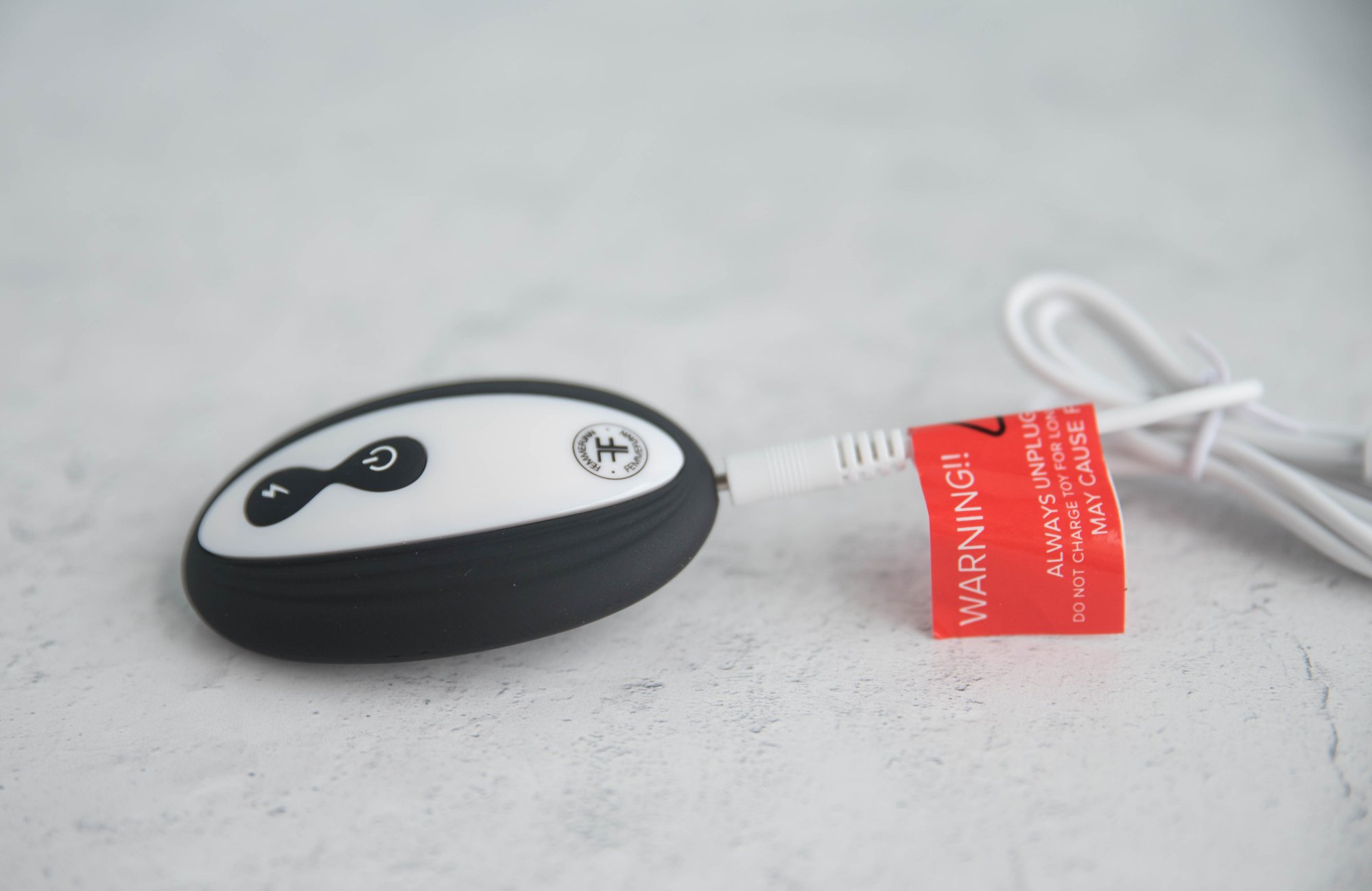 Inside the box, you'll find all of the items sitting inside of a foam cut-out tray that was specifically designed for their shape. 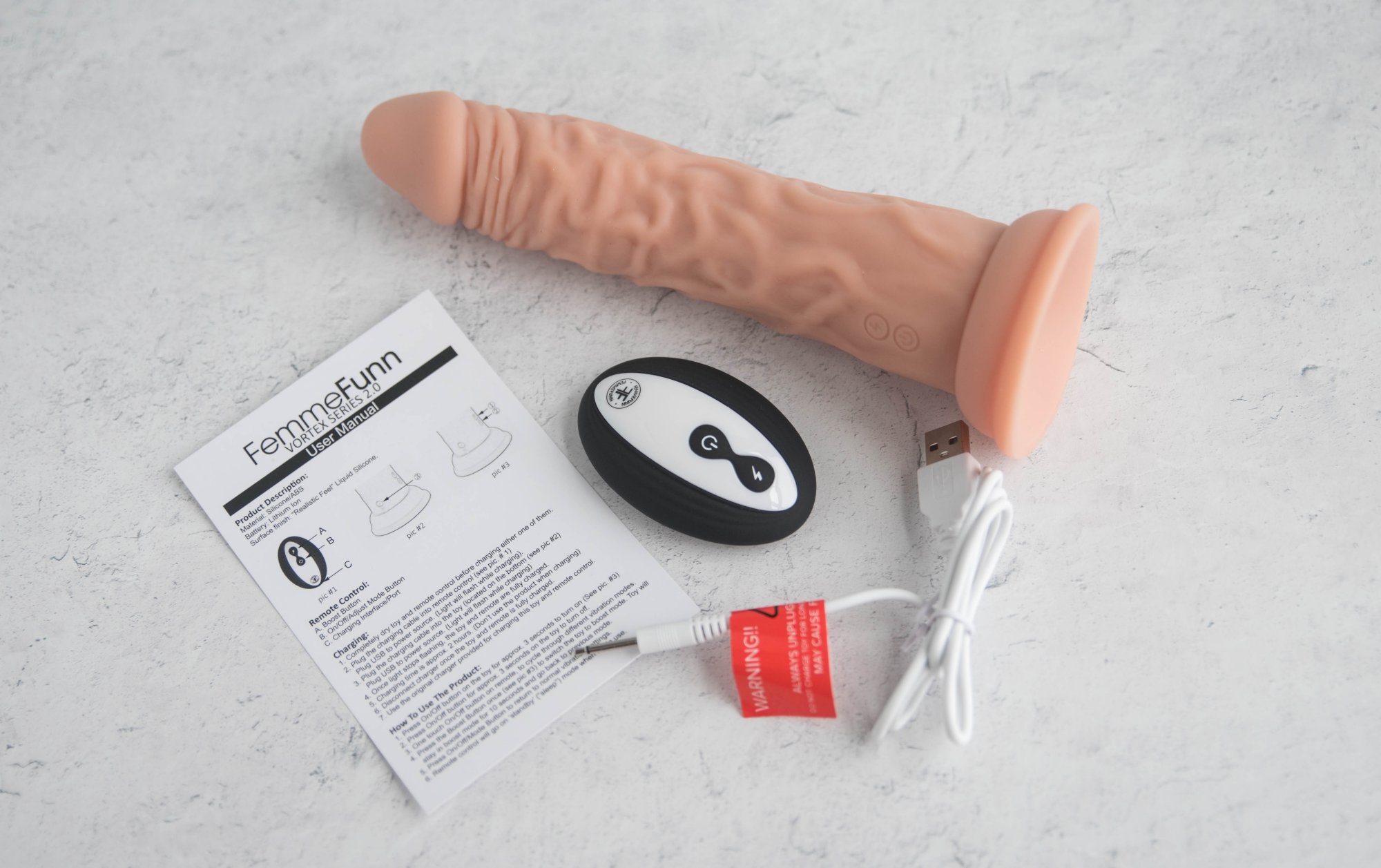 The FemmeFunn Vortex Wireless Turbo Shaft is a fun throwback to the "olden" days of sex toys where shaft rotations were all the rage - only it includes all the upgrades you wish there had been back then. The shaft rarely jams up, the material is fully body-safe, the Turbo mode is WOAH, it includes a suction cup base, it's all remote-controlled, AND it comes with a one-year warranty in case something goes wrong with the internal mechanics. You won't be left like a dud which (regularly) used to happen ten years ago.

I would have loved a way to use the rotations and the vibrations separately, but the included patterns aren't just boring, blech options - they're actually pretty fun and a nice breath of fresh air compared to most sex toy patterns.