Within the sex-toy realm, rabbit vibrators are a preferred staple for people with vulvas. Their appeal lies in the potential to pleasure the clitoris externally, the G-spot internally, or both at the same time, leading to the revered ‘blended orgasm’ if desired. Not all rabbit vibes are created equal and good sex toys are generally expensive, so it’s important to have an idea of what you’re getting into before making your purchase, particularly if you’re buying online and can’t check the product out in person first. 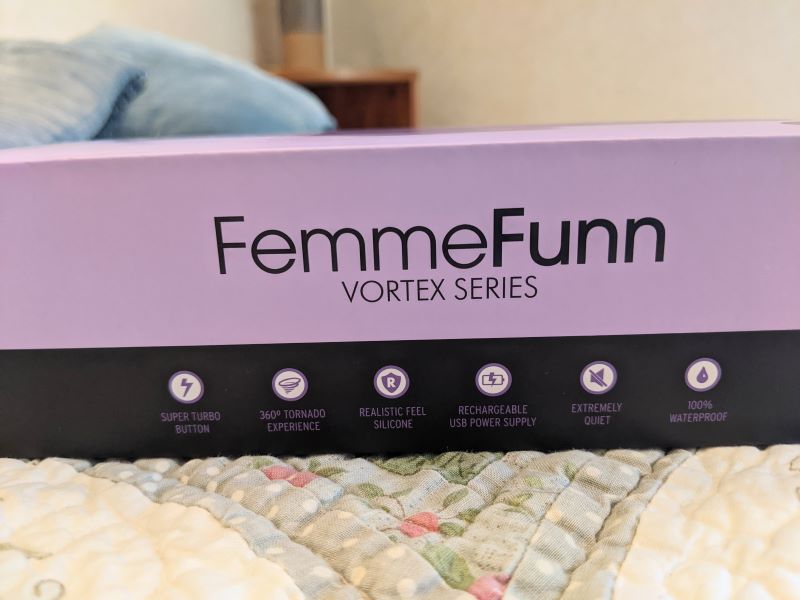 Typical rabbits are built with a central shaft with a smooth, rounded shape. There are also models (like the FemmeFunn) that are designed to mimic the look of a real penis. They’re also built with a protruding arm that bends upward toward the apex of the vulva. The end of this appendage may split in two like a pair of bunny ears (hence the name ‘rabbit vibrator’) or come in another shape. This is meant to tickle and please the clit with the yummy buzz of vibration until the user succumbs to the ceaseless onslaught of pleasure and surrenders in a quaking squall of ecstasy.

The Booster Rabbit is unique for its array of adjustable features, offering users the ability to customize their experience with a design that’s straightforward, body friendly, and easy to clean. The clit-focused bunny-ear appendage delivers 7 vibration modes of differing intensity, while the head of the shaft can be set to rotate at 3 different speeds. In addition, there’s a ‘booster’ function that packs a punch by briefly upping the rotation speed and intensity, causing the toy to shake with sexilicious fury.

This combo of options, along with a handful of practical considerations, make the Booster Rabbit a solid choice at the mid-range price of $99.99. Whether you’re looking to treat your delicate bits to a light, feathery session or a firm pounding, this toy can be programmed to fit the bill. 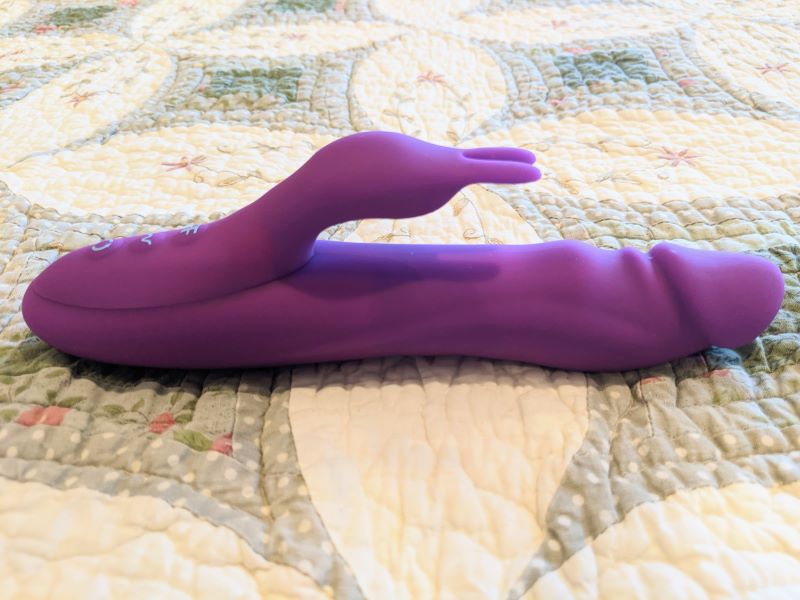 Let’s dive into the deets, shall we?

How’d You Use It?

Let’s start from the beginning...

Giddy delight bubbled within me as I freed my new friend from its packaging and stroked its luxurious silicone exterior. I ran my fingers over its pseudo-realistic dick-like grooves and felt my excitement grow in fervor the longer I held its meaty presence in my grip. “You and I are about to have a LOT of fun together.” Whether through real or imagined telepathy, I can’t be certain, but it agreed and promised the same in return. 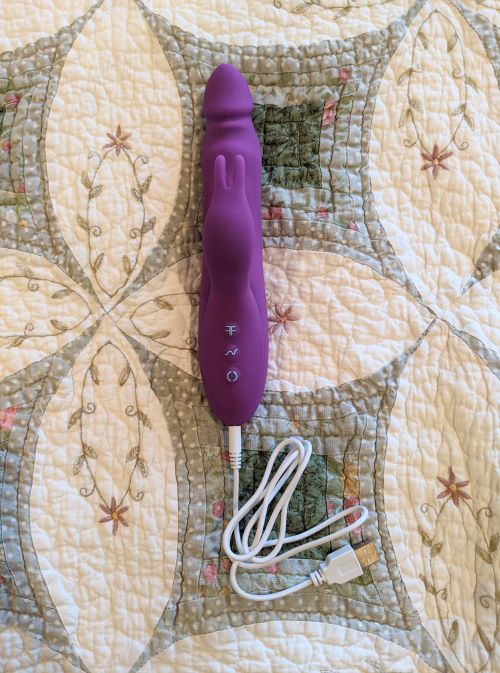 It needed a name ASAP so I’ve elected to call her Duchess, for she is royalty. (Still on an online quest for a tiny crown that suits her.)

The wait was arduous as I charged her, impatient to embark on our first session together. When the time arrived, I unplugged the cord and began fiddling with her three buttons set in a vertical line along the base. I cycled through the vibration modes and tested the head’s rotation speeds, then gave a slight jump and grinned as I activated the Turbo Boost button for the first time.

I laid on my bed buck neked and activated the lightest vibration setting, in want of a subtle and sensual build-up to the Big O. As I ran the rabbit portion over my labia and the hood of my clit, I experimented with the positioning of Duchess’ bunny ears. The curved V-shape split between the tips allowed me to find a fit that snugly hugged the unique anatomy of my little pearl. I imagine the toy can accommodate most clit sizes. Notably, the vibrations were strongest at the rabbit ears, but didn’t carry in any significant way throughout the shaft. This means the portion of the toy meant to stimulate the G-spot only delivers dampened echoes of vibration and, honestly, has left me wanting more in that regard. 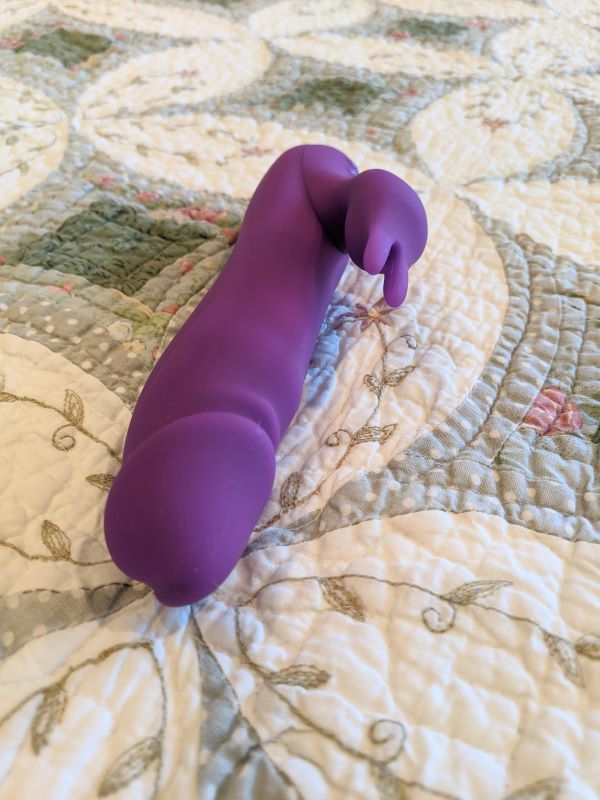 Clicking through the 7 vibration settings, I was grateful for the Booster’s user-friendly design. Toys with a ton of buttons and doodads are distracting to control while I’m doing the do and tend to put me off. Duchess has a grand total of 3 buttons set in a line, and using them quickly became intuitive to maneuver.

Once I was properly warmed up, I took the plunge and slowly inserted the toy’s head. I had to get it 3-4 inches inside for the rabbit ears to reach my clit again but once there, they fit my body’s shape easily. For me the diameter of the shaft feels pretty thick and while I’m okay with that, I can imagine it might be painful for some users who’d get more pleasure from a slimmer design. Also, while the silicone layer is reasonably spongey, I found myself wanting a tad more squish in the shaft.

Eager to feel Duchess at her full potential, I clicked the vibration mode over to the strongest setting, then activated the rotating head. The sensation was intense, but appropriate for my level of randiness. I had to push the handle downward to get the desired pressure on my G-spot, but once I did, there was no backing away from the edge. I gasped, smiled, fireworks exploded in the sky, and the unyielding buzz quickly became too much to bear. 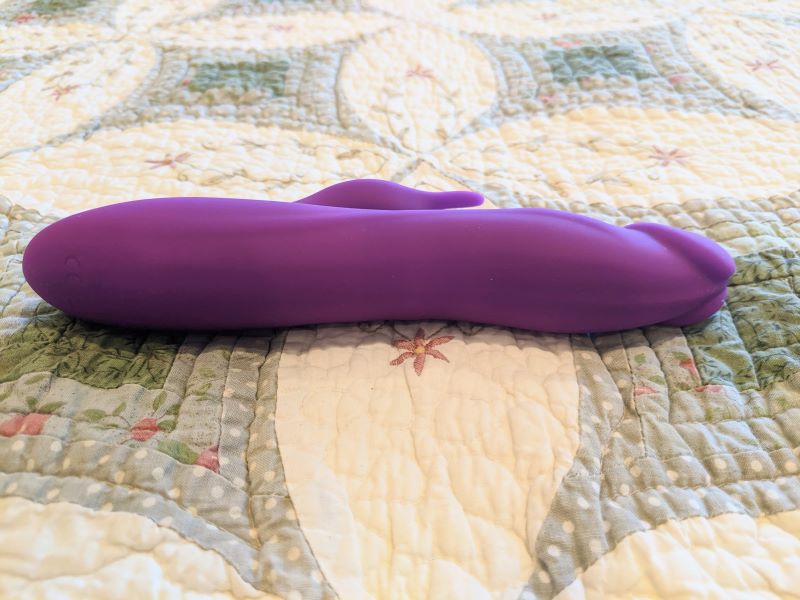 Phew, what a ride.

Over the next day or two, I continued to experiment with my new partner in crime. The second time around, I activated the Turbo Boost function toward the end of my jerk-it journey, which increases the speed of the shaft’s rotations for up to 10 seconds. While I quickly reached orgasm, I have to admit it wasn’t for me and I haven’t used it much since. I’d say it’s a great option for users who prefer vaginal orgasms and higher levels of intensity, but I prefer to savor all the little subtle nuances of climax and those were drowned out to the point where I knew I was getting off but could barely even feel it.

Speaking of drowning, my next dalliance with Duchess took place in the tub. The Booster Rabbit is 100% waterproof, and feeling dirty while getting clean and wet and warm was so satisfying, I’ve promoted it to a semi-regular habit. Big big recommend. 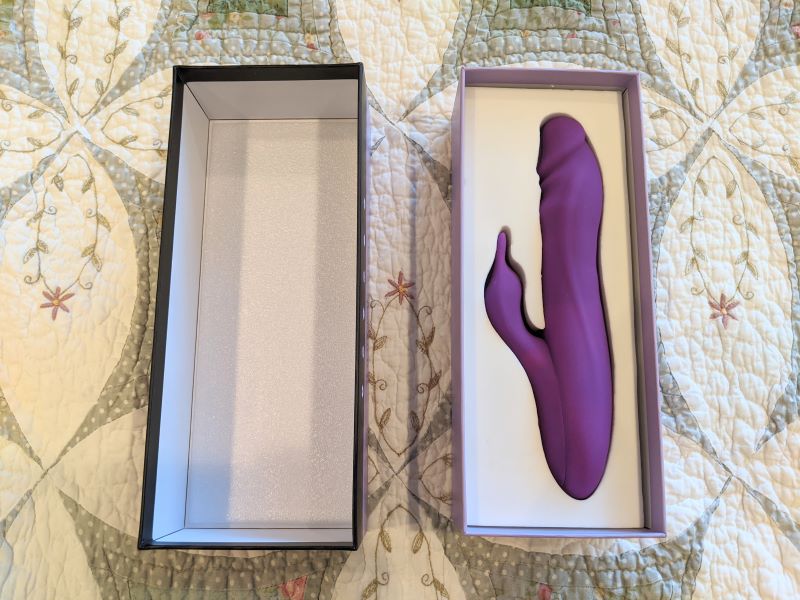 You might also use it for nipple-play titillation by way of the Booster’s bunny-ear vibrations, although the space between the tips probably isn’t wide enough to surround most nips.

Also, do as I’ve done and treat yours to a glamorous photo shoot so you can awe your sex-loving besties with pics of your orgasmic saber. (With consent, plz and thank you.) Thus far I have been met with a mix of envy, encouragement, and the observant exclamation, “Now THAT is a dick!” 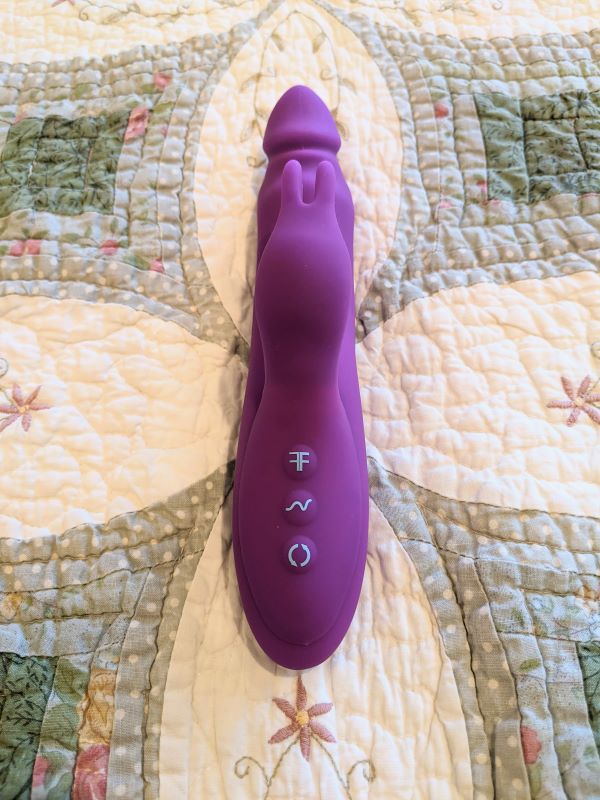 In terms of noise, the Booster Rabbit’s vibrations are reasonably quiet, but the volume kicks up considerably when the rotation function is activated. It becomes much louder when the Turbo Boost is in use. No one’s likely to hear all the fun you’re having from the other side of a closed door, especially if you’ve got a fan on or something, but this isn’t a toy you could get away with using across a dark room from someone without getting caught.

One thing to note is that the Booster doesn’t come with a locking mechanism, meaning there is the possibility that it could click on by accident while you’re en route. You don’t want to end up like Edward Norton at that baggage claim in Fight Club, so consider draining the toy’s power before taking it on a trip.

The button at the bottom of the Booster with the little circle activates the shaft’s rotation. Simply click once to power it on and another two times to switch between its speeds. The wavy middle button will allow you to activate and switch between the clitoral arm’s 7 vibration modes and patterns. To shut off either of those functions, simply press and hold down either of those buttons. The top button activates the Turbo Boost. Unlike the other two buttons, you have to press AND hold it down to keep it on, and it will turn off on its own after 10 seconds of continuous use. 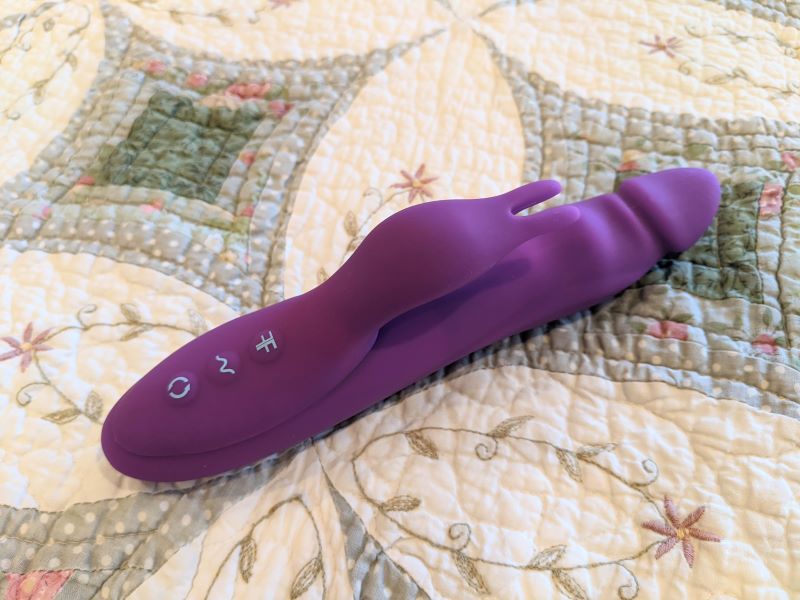 As mentioned, this toy is made from soft, silky silicone that comes in either pink or purple. (I chose the latter, but go for whichever is most likely to bring out your inner unicorn.)

Thanks to its high-quality material, the Booster Rabbit can easily be cleaned with mild soap and warm water. You may wish to use this toy with lube and if that’s the case, be sure to choose one made from a water-based formula. Thou shalt not use silicone lube with silicone toys. It’s right there in the 10 Sex Toy Commandments handed down from on high by Venus herself.

The Booster Rabbit comes with a USB cord that plugs into a hole at the base of the toy. I have to admit, it was a bit hard to spot, as the silicone layer closes over the opening to ensure water doesn’t get inside and ruin everything. Don’t worry, it may not look like a proper place to stick a plug, but push firmly and it should slide right in. 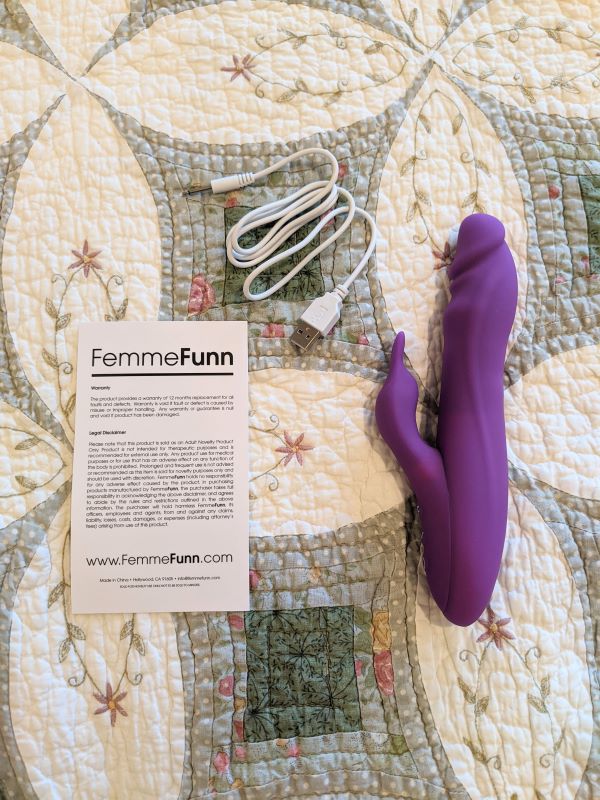 Charging the toy takes around 2 hours and the battery life seems to last around the same amount of time. While it’s plugged in, lights surrounding the buttons will blink. You’ll know it’s fully charged when the blinking stops. Note that the toy cannot be used while it’s plugged in.

It also comes with a 1-year warranty printed on a little card placed underneath the toy’s cushy packaging. Don’t throw it out, you might need it someday!

The product came in a normal padded envelope that thankfully did not shout, “HEY, LOOK! THERE’S A SEX TOY IN HERE!” Rather, it was discreet, nondescript, and dutifully respectful of my privacy. The plastic-sealed box has an accurate photo of the Booster on the front, along with a description and directions for use on the back. Inside, along with the power cord and warranty, is a protective foam casing cut to fit the shape of the toy. 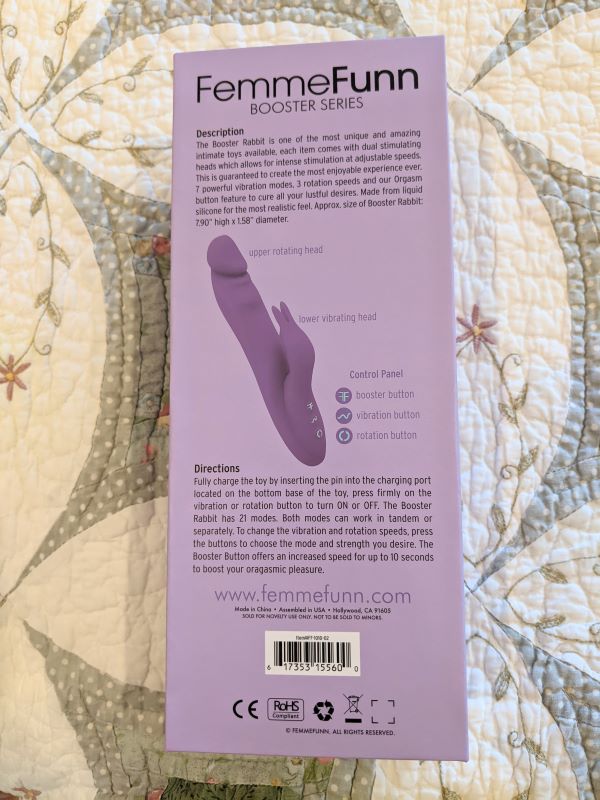 I give the FemmeFunn Booster Rabbit 4 out of 5 stars. While it’s an excellent, versatile choice for its price, I’d like it better if the intensity of the vibrations carried throughout the length of the shaft. I also think a locking mechanism would be a good call. (Don’t worry, Duchess! I still love you!)

If you’d like to explore other possibilities, there’s a lot out there to choose from! The We-Vibe Nova 2 is a popular alternative with a smooth shaft that’s less lifelike than the Booster Rabbit’s, but more flexible, meaning you can bend it to hit your G-spot at just the right angle. Its rabbit appendage is one uniform bulb, so this might not be your best bet if you're big on bunny ears that surround either side of your clit.

You might also check out the LELO Soraya Wave. Like the Booster Rabbit, its shaft also moves but rather than rotating, it curls upward in a ‘come-hither’ motion designed to awaken the G-spot. Both the shaft and clitoral arm are fully flexible, making it a solid pick for all body types.

Additionally, there’s the plusOne Dual Vibrating Massager. This product doesn’t offer movement in its shaft like the others, but is far more affordable and still made from high-quality, easy-to-clean silicone. A great option if you’re seeking similar sensations but want to save your dubloons for other goodies.

Molly Lazarus is a kink and sexuality writer based in the Bay Area. She dreams of a world where consent-loving hedonists can explore the depths of their depravity without fear of persecution or sexual abuse.