Imagine me with a very serious face and serious voice.

How’d You Use It?

So, I had a while to test this little Companion out and I gave it a whirl in a few different situations:

I tried it with my partner controlling the remote:

How Else Could You Use It?

For vulva-owners, using the tail as a handle could let you stimulate your clit during sex. It’s fairly flat so it shouldn’t get too much in the way of your slapping bodies.

As for the penis-havers, that little nub might feel good against your frenulum, or holding the broad side along the shaft, if the focused vibrations are too intense. 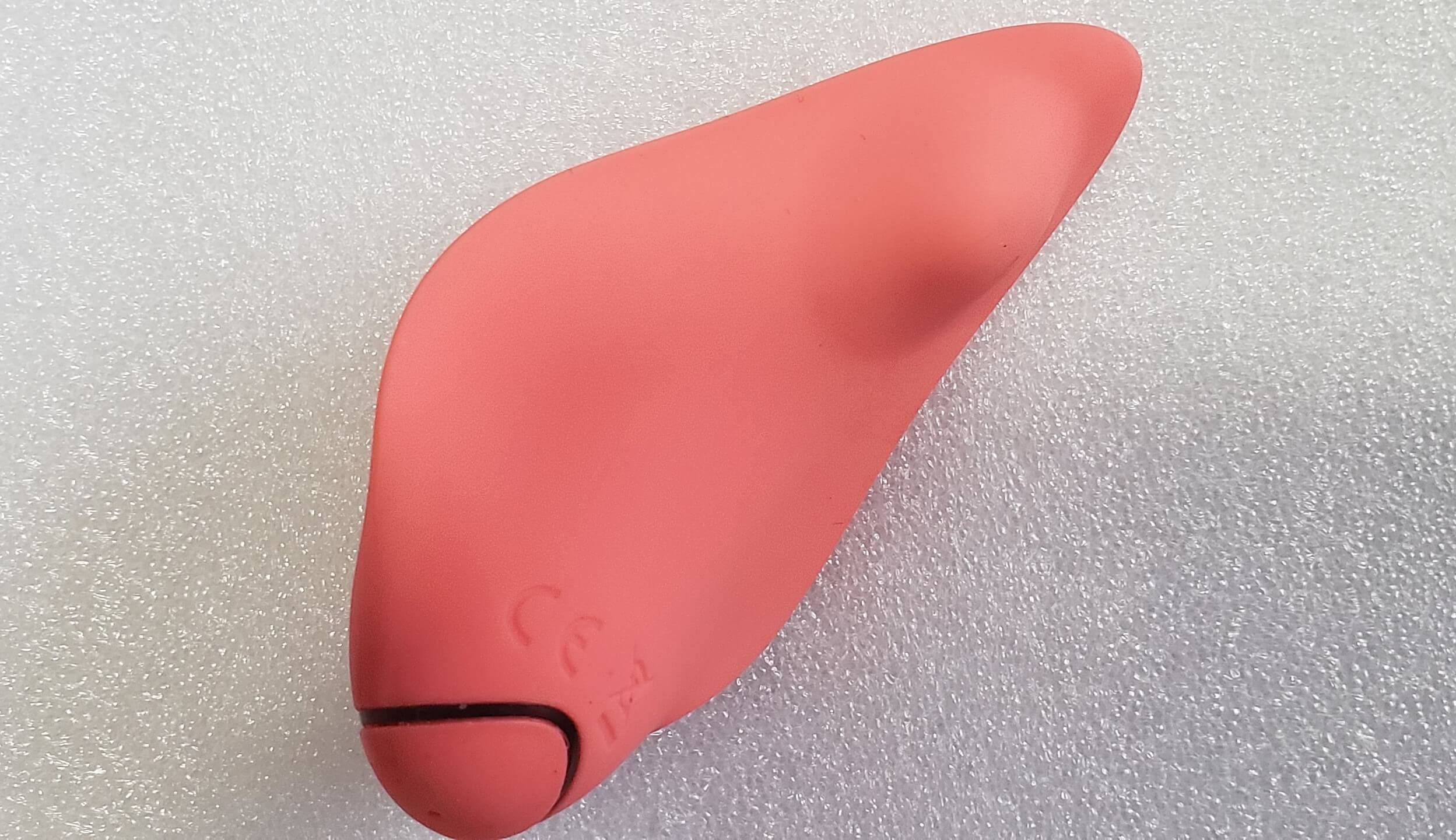 The Clandestine Devices Companion comes in bubble gum pink with a grey remote. You can swap out the wrist straps of the remote for a different watchband if you like (it is compatible with smart watch and fitness tracker bands) or use it without the straps at all and just keep the remote in your pocket. I wouldn't do that though because it is small and I would definitely lose it. 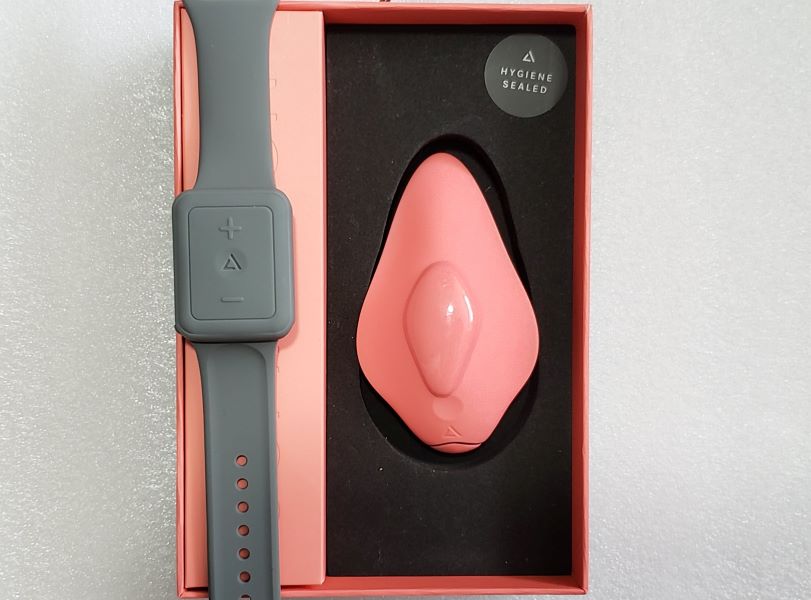 It’s much quieter than some of the larger toys I enjoy when discretion isn’t top of mind, but I’m not sure it’s quiet enough for every situation. It sounded almost exactly like a cell phone set to vibrate and could be heard clearly from beneath the covers and from the next room if both the doors were open. Thoughts of using it in a movie theater were thwarted due to the noise. In a busy restaurant or a club (still closed in my area because of COVID, so I can’t verify) I think it would be ok.

The owners’ manual says the maximum noise level is 68 decibels, which puts it somewhere around the same level as laughter.

How Does it Work?

The remote is on a utilitarian grey band that at first glance might be taken for a smart watch. If your partner is very funny they might pretend to be a spy and talk into it, ordering the back up to “take them all out” instead of pressing the right button to get your vibes going. They might think that is funnier than you do.

My experience charging it the first time can best be described as fuck around and find out. There is a teeny tiny pinprick hole at the tip, and the drawing in the manual indicated this was the charge point. I spent ummm, I’m not going to tell you how long, trying to flip the tip open to access where I figured the cord would attach before going the brute force route and shoving the charger into the hole. Make your own “big stick in a little hole” joke here.

The Clandestine Devices Companion is made out of really luxurious medical grade silicone. It is lovely and feels amazing. I don’t feel like I can overstate this point. You can use a water-based lubricant with it if you like, but I found it silky enough to use raw. The vibrator is fully waterproof, which means washing it is a breeze with some warm sudsy water. I wasn’t able to verify that the remote control is also waterproof, so I would recommend giving it a quick wipe or spray with a toy cleaner, and keeping it out of the tub. The charger is definitely not waterproof, but also how dirty are you getting it? Anyway, don’t charge it in the tub.

Once I figured out where to stick the charging pin, it charged fully (as indicated by the fact the light at the tip stopped flashing) in two hours the first time and a bit over an hour [70 minutes, according to the manufacturer] for subsequent charges, which allows for about an hour and a half of play.

I’m not sure if I turned it off wrong or what happened, but I know I did not vibrate for that long the first time. When I pulled it out the second time it was dead, dead, dead and I was frustrated. Some devices have an auto-off feature which it seems the Clandestine Devices Companion does not, too bad because apparently I need it.

The toy arrived in a plain white FedEx courier envelope which was discretion itself, with the exception of the customs slip stating it contained an “intimate massage device.” It wasn’t splashed all over the envelope or anything, but if you are very private, it could be embarrassing. I only mention it because it led to a bit of a hilarious encounter: I had missed the courier and had to call around to arrange a pick up. I spoke to someone at the local office who pulled the package aside for me after I told her it was “Something important I need right away, for work.” 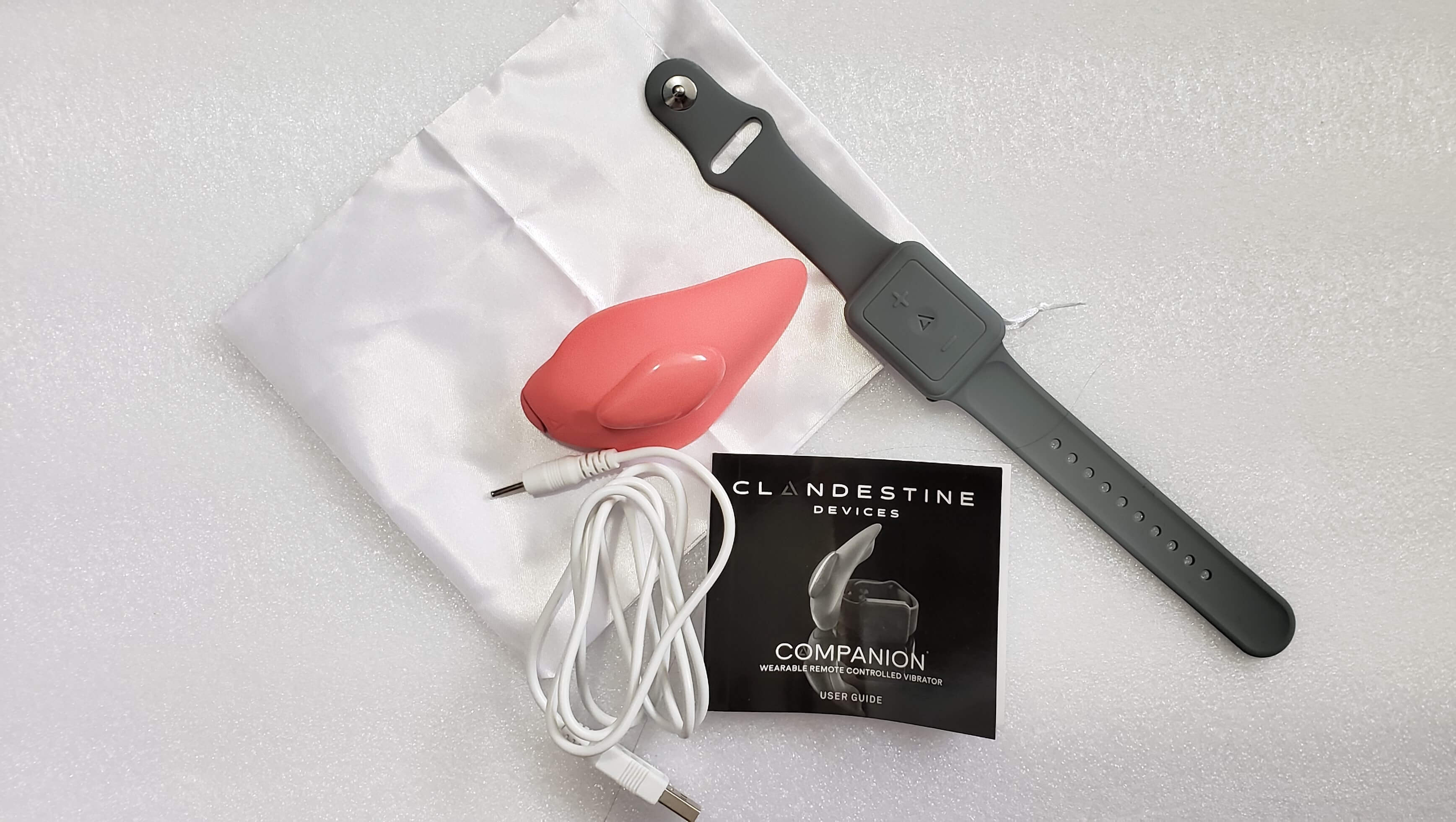 The box is a sturdy cardboard which would be good for storing it, except that it is segmented inside to hold each piece and getting it back in is kind of a pain. The remote comes with the watchband part detached, and after you put it together, it doesn’t fit nicely back in the box.

Luckily it comes with a little drawstring pouch so you can keep the pieces together without the box.

Maybe it’s just me but I don’t feel like that lends itself particularly well to partner play. There isn’t a great indication for your partner to know what setting they are on, unless they can hear the pattern, so if you were separated from them, like across the club or something, they wouldn’t know if they had it dialed in to your favourite pattern.

As a panty vibe, I found the Clandestine Devices Companion a bit of a bust. I was very excited about the exhibitionist possibilities and between the difficulties with getting the controls right, positioning it comfortably and the magnet that wasn't strong enough to hold on (and I swear I wasn't' wearing super thick panties or anything!) it fell short of the perfection I had hoped for.

We-Vibe has been making app-controlled sex toys for several years and has a nice variety of options to suit your anatomy and how you want to please it. The We-Vibe Moxie is their panty vibe. It comes with a small handheld remote or use the We-Connect app and hand control over to your partner for some long distance fun. You can read our review of the We-Vibe Moxie here.

The Sexy Secret from Satisfyer is another comparable panty vibe. Unlike the others, it doesn’t have the option of a handheld remote, but it does use the Satisfyer Connect app, which again means your lover can control your good vibes from anywhere in the world. The Sexy Secret has similar bells and whistles to the other two (waterproof, body safe silicone, rechargable) but rings in at a lower price point, which might make it a good option if you are still a little unsure if it is the right toy for you. 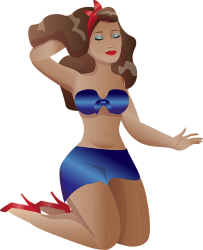