Blood Sex - and Why We're So Fascinated (or Repelled) By Blood

There was blood everywhere. I’m talking knife to the jugular level. It looked like a friggin’ crime scene. I felt like we were in an episode of CSI. I left a bloody handprint on her white wall.

She was already wearing the strap-on when I arrived. She was walking, living, breathing sex, definitionally. No joke. If you look up “Sex” in Merriam Webster's dictionary, her picture is there.

Her hands clutched my upper arms. Once our skin touched, it was all over. With the potent electricity and excitement of being together, we skipped foreplay and went in for penetrative sex immediately. There was no workup, which of course seemed like a good idea at the time (hence, the blood). Sometimes your head gets ahead of your body and there is no stopping the raging libido monster within.

My first reaction post-blood was to act embarrassed, but the sheepishness was feigned. I felt like I was supposed to be worried and upset, but I wasn’t. I was turned on. I didn’t care about the mess. There was something so raw and animalistic about the whole thing. It didn’t take long for her to realize I wasn’t freaked out (or in pain, BTW). She admitted to being very into the blood too.

It's called blood play, but information on it is pretty sparse. If you Google it, you’ll mostly find information on donating blood to the Red Cross and HIV statistics. Not helpful. Still, I wanted to know everything there was to know. Because I haven’t stopped texting this woman about blood sex.

This whole accidental experience had put blood on my mind. What is it about blood? Am I freak for being so very into this? Why are people into it? Wait - are people into it? If I wanted to have it again, what would I have to do to make it happen? (For health reasons, I don’t want to cause minor vaginal tearing again ...)

What is blood play, first of all?

Now, you might have read the anecdote above and wondered what the actual fuck I was talking about. That’s OK. Like I said, there isn’t much information out there about using blood during sex. Blood inspires strong reactions in people. I had a boyfriend who legit fainted when he saw blood. I once started my period during sex and he went pale and nearly puked. LOL, good times.

LeMorgese says that the same rules of consent, communication and understanding are involved with blood play - only even more so; drawing blood can be dangerous.

Seriously, we’re talking about blood here. It really can be dangerous (even if it sounds mad fun). LaMorgese tells us that blood play can involve cutting each other or oneself, licking blood off your partner, or even drinking it.

It’s probably important to note that it doesn’t necessarily involve real, human blood every time, though. It depends on what you’re looking to do up in here. You can enjoy blood play using blood capsules, menstrual blood, or even something you pretend is blood such as red wine or strawberry sauce.

Read: For the Love of Period Sex

Why are people into blood play?

We’re animals at our very core. Hunting, killing and eating things is pretty f-ing feral … which can be sexy. Obviously not everyone is going to be turned on by this, but it makes sense why some people would be. We’re a sexually dynamic breed when we’re left to our own devices.

You’re not a freak if you like blood during sex. You’re not square if this is making you queasy. Everyone is different.

Where do you start?

Plus, emotionally speaking, blood play is not your run-of-the-mill vanilla sex. It can be … vexing, both emotionally and physically.

“I highly recommend starting with fake blood. Blood play can be very emotionally intense, and it's best to build up to the real thing to give everyone time to adjust and feel comfortable,” LaMorgese says. “ Actually cutting each other is, of course, OK too, as long as both partners are consenting and ready.”

Check out your local costume store (or Amazon Prime) and get some Halloween blood capsules. They have the color and texture of real blood (for the most part), without involving the worry of physical pain, scarring, or possible screw-ups. If you do decide to cut your skin or someone else’s, you must make sure the implement is sterilized. Personally, I don’t think you should be cutting anyone or yourself without professional blood play experience. The question is, where does one learn how to do that? Is there a blood play finishing school somewhere?

Seriously, let me know if you hear anything.

How do you keep it “clean?”

I’m going to go out on a limb here and say the only thing more likely to keep you away from blood sex other than a fear of blood is a fear of mess.

Women’s health brand FLEX conducted a survey of over 500 people, asking them their thoughts on period sex. Eighty-six percent of respondents noted that "the mess and cleanup” were the biggest reasons to keep them from having period sex. Forty-five percent of those asked said that period sex is “kind of gross.”

So, if you want to do blood stuff but cringe at the thought of a bloody handprint on a white wall, here are two pointers:

Get some red towels. For obvious reasons, red towels are ideal for this kind of play. Spread them out wherever you’re going to be getting bloody and have at it.

Stay off the bed. Blood (real or otherwise) will seep through towels to some degree. If you are bothered by the idea of staining your mattress, keep it off the bed. We suggest the floor. It keeps the animalistic qualities of blood sex alive, you know? 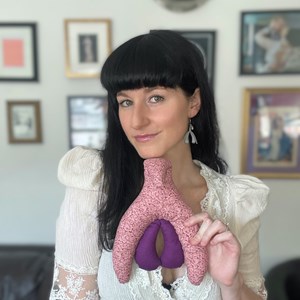