A hundred bucks for an orgasm?!

Well ... you get what you pay for. At least that's how the old saying goes. But is it true for sex toys, where the most recommended brands and models tend to cost at least $100, and often as much as $150 or more?

The answer is: it depends.

If there’s anything that should be accessible, it’s orgasms. And, while not everyone needs a sex toy to get off, everyone who wants a sex toy deserves to have that experience. We're all about equal opportunity orgasms, y’all.

Fortunately, while a lot of the best vibrators and other sex toys are expensive, competition, demand and better consumer awareness is increasingly leading to less expensive sex toys that, well, don’t suck. In fact, there are some cheaper vibrators out there that are actually good.

By the same token, there are also A LOT of really shitty sex toys on the market. Toys that are low-quality, poorly made and may not even be safe to use. Plus, most them just don’t do sex toys justice. Everyone – no matter their income – deserves better.

When it comes to a material you’re planning to place around or in a mucous membrane (your vagina), quality counts. We’re not talking about a cheap shirt from Target here, y’all. The stakes are much higher because some of the most inexpensive sex toy materials may not be safe for your body. Some inexpensive plastics – especially softer, jelly-like materials – include chemicals called phthalates, which have been banned for use in baby toys because there’s enough science to suggest that they’re unstable and may not be safe. They can even cause reactions and chemical burns in some people.

Other materials - like TPR and TPE - are typically nontoxic, but may still be porous, which means they can harbor bacteria and fungi, even after they’ve been thoroughly washed.

Sex toys from plusOne are made of body-safe silicone or ABS plastic and they're all available for less than $30. Check them out here.

When it comes to vibrators, the motor is EVERYTHING. And, yes, motor quality can vary widely between brands. In some stores, you can test out vibrators on display to see how powerful they are. You should be looking not just for reasonable intensity, but also for a deep, thrumming kind of vibration, rather than something that buzzes the surface of your skin.

If you can’t test out a toy, look online for recommendations and reviews of the products from people who’ve tried them. A reasonably strong motor will ensure you have a toy that leaves you satisfied. Plus, buzzier vibrations tend to come from lower-quality, poorly made motors – the kind that tend to fizzle out mid-orgasm shortly after you’ve purchased them.

There are lots of cool innovations in the sex toy industry. But there’s also a ton of weird, junky gimmicks you don’t want near your junk. It can be hard to know the difference! So, if you have a limited budget and a small (or no) sex toy collection, it’s best to go with a classic shape and style. There’s a reason why you see some common shapes between many different brands – they work for a lot of people. We’re not saying that makes them a great toy for everyone, but they’re a good place to start exploring. 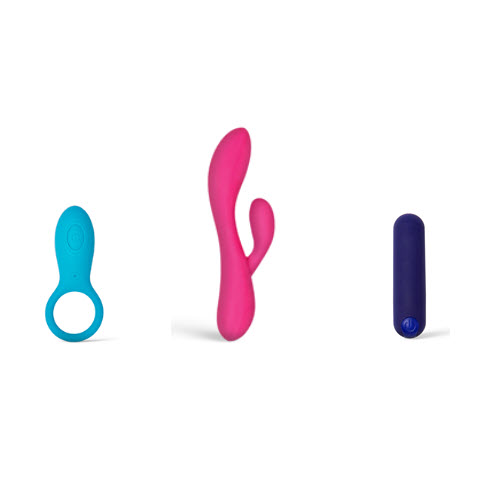 There are a lot of cheap sex toys out there, but all the ones worth buying come from reputable brands. So, what does that mean? At minimum, a brand worth considering has a professional website, reviews from reputable bloggers, and a presence in quality stores or sex shops.

In other words, you should be able to verify that the company that made the toy is a legit company, not just an Amazon web shop selling cheap, knock-off junk straight from China.

If you end up with a product from the latter, you can bet that if something goes wrong with your purchase, you won’t be able to find anyone at the company who’s interested in hearing about it or providing support.

You may not get everything you want but when weighing different brands and models, it can pay to look at what additional features they offer/come with. Here are a few key things to consider: