An In-Depth Look at Pony Play

The practice of people dressing as animals for the purposes of spirituality and sexuality has been with us since the beginning of recorded history. Ancient Rome has some of the first recorded examples of people dressing as equines for the purposes of sexuality. The Ancient Roman book "Metamorphoses of Apuleius" was a book about his adventures with magic and sex. It involves a transformation into a bird. Things go awry, and he becomes a donkey instead. In his new equine form ,he has a series of adventures, including the first recorded instance of pony play.

After that period, pony play would show up sporadically in underground adult magazines and pornography. From 1946 to 1959, artist John Willie used pony play as a regular component of Bizarre magazine. Then, in 1987, Equus Eroticus became the first dedicated magazine to specialize in pony play.

So, clearly, the interest in pony play is real and long-standing. But what is it exactly? And what is it that draws people to it? Let's take a look.

In pony play, one person takes on the role of a pony, while the other plays a rider or trainer. The reasons for someone taking on the role of the pony can be varied. Some folks are continuing a form of animal play from when they were children ("playing horsey"). Others exhibit a fetish called autozoophilia, or they experience arousal from taking on the role of an animal. Some people simply like role-playing as any animal, and the horse is an archetype they feel they can connect to. There is also a more recent theory called Erotic Target Location Error (ETLE), which is the displacement of arousal from eroticizing a partner to eroticizing oneself in another form, in this case a horse.

For those who take it seriously, pony play is an expensive, time-involved fetish where someone takes on the role of pony, and the other person takes the role of trainer. It is further broken down into subcategories for each role.

The Trainer is the Dominant in this power exchange, and they can identify with any gender. In fact, gender takes little role in Trainer or pony. The Dominant is not strictly a Trainer per say, as they can take the role of a Trainer, rider, groomer, or Owner.

A Trainer has the most time involved aspect of pony play as they are responsible for taking the submissive who wants to become a ponyboy or ponygirl and teaching them everything. One does not become a ponygirl or ponyboy overnight. They must be taught the protocols of pony submission, cantering, stances, dress, behavior, demeanor and showmanship.

Some Trainers may have more than one pony. In fact, many have stables where they train ponies for others who identify as one of the other Dominant roles. Trainers spend vast amounts of time perfecting the training and good Trainers are often sought out by others who want the ponies trained by that specific Trainer. Often, the Trainer may specialize in stud services (sex), show ponies, or riding ponies. (Learn more about the D/s relationship in How to Spot a Good Dominant.)

An Owner is the Dominant in charge of a particular pony. They are in control of feeding, scheduling, equipment, dressing and all showings. A pony can be loaned out to others for the purposes of being shown, for breeding, racing, or reparation. Also, nothing is mutually exclusive about having an Owner be a Trainer, groomer, rider, or someone who shows the pony.

A groomer is in charge of everything from specific equipment, latex clothing, rub downs, massage, bathing, and especially aftercare.

Riders are pretty common and can be anyone given permission to ride the pony, or horse cart. (Yes, pony play sometimes involves the pony pulling a rider in a cart.)

Many of the Dominants will wear jodhpurs, jodhpur boots (or paddocks), gloves, a riding helmet, and a red riding jacket. Usually they are purchased at horse riding fashion stores or can be made out of latex for fetishists. Riding crops, buggy whips, horse carts, and sulkies (two wheeled horse carts) complete the outfit.

Ponyboys and ponygirls come in a variety of sizes, shapes, and roles. Much of this depends on what the Trainer wants to do with the skill set of the pony. They can be set up as a cart pony, riding pony, show pony, circus pony, or a stud pony.

Cart ponies have the most physically challenging job because they must pull both a person and a sulky or cart around. Cardio, physical strength, endurance and consistency are the most important traits for a cart pony.

Riding ponies must also have the physical strength to hold another person. All physical attributes and good health is a must. They must also have a very strong core, abdominal muscles, and back muscles.

Show ponies need attitude, presence, charisma and must be well groomed. They compete with other ponies for titles that have a lot of prestige in the pony play community. A subsect of the show ponies are the circus ponies. Circus ponies are trained to be both a show pony and do circus tricks with their owners who may be dressed as riders, clowns or ringmasters.

Last, but not least, are the stud ponies that get bred to other ponies for sexual purposes. Breeding ponies are one of the most entertaining aspects of pony play. Although the word stud usually suggests a masculine gender, a stud pony can be any gender. Also pony “types” can be mixed and matched. Nothing stops a ponyboy or ponygirl from being both a stud pony and a show pony.

No matter what role you want to take on, pony play can be a fun and sexy fetish. But it's also expensive and time consuming. It has a lot of potential when it comes to meeting great interesting people and having some amazingly good sex.

Relationships
How to Date When Kinky
by GIGI ENGLE | Author, Sexologist & Educator
Advertisement
Have Better Sex! 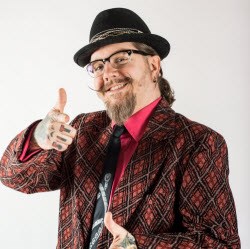