The Naked Truth About Body Confidence

by IVY WILLOW
Published: MARCH 8, 2016
I look in the mirror and what I see is an image of a woman whose reflection is patched together from a web of what other people think.

I looked at the naked man in front of me. He had just told me he couldn’t get an erection with me. That I "didn't do it" for him. I was a naked 23-year-old girl and he was an aging 52-year-old man. I left his house feeling humiliated. Back at home, I looked at my naked body in the mirror. I looked at the curve of my breasts and my protruding pot-belly. I examined the line of my hips. And I cried.

At heart, I am a nudist; nakedness is the one thing I do well. When I am naked I feel a sense of freedom that I cannot get when I'm wrapped up in clothes. But here I was, a young, confident nudist whose nakedness was making her cry. For weeks afterward his words followed me around. They seemed to be burned in my mind. Suddenly, I saw what he saw, as though his words had branded the surface of my skin.

They were the words of a wrinkled, saggy, old man, yes, but they were also the words of my lover. And really, the words themselves were meaningless. They were just shallow, hurtful jibes. I could have tossed them aside, but instead, I breathed life and meaning into them. I kept them alive long after they were spoken and should have been dead. And I let whether a man wanted to see me naked become the very linchpin of my personal confidence.

It's been this way for a while. Ever since my college boyfriend left me a voice mail on my mobile informing me I was too "fat and ugly to be his girlfriend," I have clung to this need to be desired, allowing the look in a man's eye to define how I see myself.

Under the covers, on some nondescript, miscellaneous man’s chest, I have searched for something that extends beyond one night. With bodies intertwined as the moon gives way to the rising sun, I was finding sexual gratification. What I was seeking was self confidence. By morning, it always seemed farther away than ever before, and I'd begin to question not only my looks, but my self, my worth and why things keep going this way. Why I see an erection as confirmation that I'm attractive. Why the joy of sex for me is often in being desired, not in mutual enjoyment (and certainly not in an orgasm). And why every morning after seemed to ebb away at the small amount of confidence I had left.

A little while ago, I lay in bed with my boyfriend, naked, no longer so afraid to bare the curve of my breasts, my protruding pot-belly and the line of my hips. Until I read his diary. Just a snippet, but an exact replica of what the old man had a least dared to say to my face. This time it was not my lover but my boyfriend.

Somehow we tried to salvage our relationship. But when we kissed I saw his words, when he paid me a compliment, I saw it as a pity gesture. When we had sex, it felt as if someone was hanging from the ceiling shouting the words out. I flitted around in the shadows, flinching at each touch but desperately hankering for some kind of reassurance that he wanted me anyway, that I was attractive. I analyzed each move and every comment like a mathematical formula. If I just looked at it from the right angle, I thought, I could somehow prove beyond a reasonable doubt that I was beautiful.

The words he wrote had stained my confidence, sure, but they also emptied all meaning from everything he'd ever said. So, I began to desire sex even more, just to see that look in his eyes, as if I could find a glance that would give back everything his words had already taken. It hasn't happened yet. I'm sure I'll keep trying.

I can't be the only one. According to the Body Image Program at Butler Hospital in Providence, the percentage of women who are unhappy with their bodies more than doubled between 1992 and 1997, rising from 25 percent to 56 percent. I can only imagine that I'm part of a whole generation of women who are so preoccupied with checking whether our stomachs are exposed or our thighs have cellulite that it's hard to have sex, let alone have an orgasm. (Learn how to bust through common body-image roadblocks in Worried About Weight? How to Have Spectacular Sex Anyway.)

I look in the mirror and what I see is an image of a woman whose reflection is patched together from what other people think, and the thread running through it all is how much a man seems to want to bed me. But at least I know now that the fabric of self-confidence can't be woven by others. Otherwise, we run the risk of becoming the patchwork sum of other people's judgments. Like me.

Maybe there's some truth in the saying we must love ourselves before anyone else can. What I think is probably more accurate is that we shouldn't let anyone love us before we love ourselves. And there's one more thing I'm sure of: Sex is not self confidence. It's taken a lot of men to teach me that. As for finding it for myself, well, I'm still working on it. (Want to read more first-person perspectives? Find them here.) 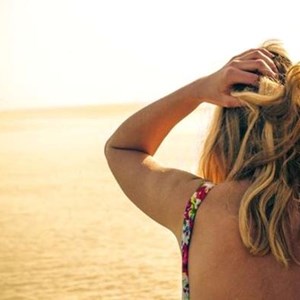 Ivy Willow
I am trying to be a journalist, writing on politics and dabbling in sex to lighten the mood, and in the process learning a lot about myself.
Full Bio
In The Kinkly Shop
Visit The Kinkly Shop