Like all things clit/vulva/vagina-related, the clitoral hood comes in all shapes, sizes, and colors. This piece of skin sits over the glans clitoris and protects it like a bodyguard.

You might be wondering how you find this hood. That’s totally OK. What’s important is that you’re here and ready to learn.

If you want to find it, take a hand-mirror into the bathroom and look at your vulva (this is something every person with a vulva should do to get to know themselves). Look at the outer and inner lips of the labia. The glans clitoris (and clitoral hood) sit at the top of the inner lips. 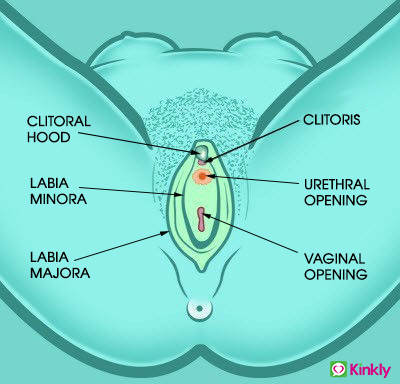 If you pull back the hood flap, you can usually see a pearl-like bulb. The bulb is the glans and the flap is the hood. You mind not be able to make the distinction, but it’s there. Take some time to feel around a bit and see what sort of sensations you experience. Upon arousal, blood rushes to the clitoris making it plumper, which can help you to differentiate the hood from the glans.

The clitoral hood never gets enough attention. If you think about the state of sex ed in the world, it’s understandable. We’re pretty busy explaining to people that the clitoris is life/exists - getting into the trenches of its structural anatomy seems like a big ask, doesn’t it?

Well, let’s take a minute to praise the clitoral hood. Here is why it really is the unsung hero of vulva-owners' pleasure.

1. The glans clitoris is hella sensitive!

The glans clitoris is extremely sensitive. It has 8,000 of the full clitoris’ 15,000 total nerve endings - all packed into that lil’ nubbin.

How to Pleasure
Got a Vulva? Here's How to Love Oral Sex
by STELLA HARRIS

For some clit-owners, it is too sensitive to touch straight on right away. This little munchkin needs a buffer. The clitoral hood to the rescue!

Whenever giving clients guidance on ways to deal with a sensitive clitoris, I always recommend starting with the hood as buffer. The hood is like the person who protects the quarterback on the football field. The, um, left tackle. Yes, I Googled that just now, but the analogy still works.

If you’ve noticed sensitivity with your clitoris, always try indirect stimulation along with a lot of lube. This helps to get you to orgasm without any discomfort. Ah, if only we had lessons like this in school.

If you’re a person, who comes from above their clitoral structure (from the pubic mound) with a sex toy, you’re likely using the clitoral hood as a buffer between toy and clit without even realizing it. Once the clitoris becomes engorged, the clitoral hood usually retracts. This is your body’s way of saying, “The clitoris is ready to be touched now.” You can then directly touch the clitoris

Some people, no matter how aroused, find that touching the glans clitoris directly is just too much. It can even be a bit painful. To help with discomfort, you can push the clitoral hood back over the clitoris to re-create the buffer. This is just one of the many ways that the clitoral hood saves the day.

2. The hood acts for a clitoris the way a foreskin does for a penis.

The foreskin on the penis and the clitoral hood on the clitoris are analogous structures. They are both there to protect the head (the penis head and the glans clitoris). This skin helps to preserve the sensitivity of the clitoris, which will lead to more pleasure (and possibly orgasms).

Thirty percent of the world’s penis-owners are circumcised. Knowing what we now know about the clitoral hood, I can personally only hope there is a cultural shift in favor of leaving penises un-snipped. Not to get political, but when the clitoral hood and/or the clitoris is cut off, we call that female genital mutilation (FGM).

2. It helps you have multiple orgasms (yes, really!).

Another fun thing to know about the clitoral hood is its function in one’s ability to have or not have multiple orgasms.

After orgasm, the clitoris can be highly sensitive - too sensitive to withstand direct touch right away. This sensitivity is subjective - there are so many nerves running through the clitoris that how everyone perceives touch will be different.

If you’re looking to ride the Orgasm Train right after O #1, utilize the clitoral hood. Try coming from above, using the hood as a buffer. This might be just the thing you need to start the sexual response cycle on its way again to a second orgasm.

Do keep in mind, there is no shaming here. Multiple orgasms are not something need to “achieve.” Explore your body and capacity for pleasure. If you have a bunch of orgasms, great! If not, that’s great too!

Gigi Engle
Gigi Engle, ACS, CSE, CSC, is an award-winning feminist author, certified sex coach, sexologist and sex educator. As a sex educator, she promotes and teaches about pleasure-based sex education, masturbation and safer sex practices. Gigi’s work regularly appears in many publications including Cosmopolitan, Marie Claire, Elle Magazine, Teen Vogue, Glamour and Women's Health. Her articles have been shared over 50 million times, with her top posts reaching over 150 million shares. In 2019, Gigi was named Journalist of The Year at the Sexual Freedom Awards. Her book, "All The F*cking MIstakes, A Guide to Sex Love and Life" (McMillian) is available wherever books are sold.
Full Bio
In The Kinkly Shop
Visit The Kinkly Shop