Hold on a second. Pee? Seriously? In fact, there is some debate around what this fluid actually is. Why is it that the female reproductive organs continue to remain somewhat of a mystery? The latest research suggests that contains some prostatic-specific antigen (PSA), an enzyme that is part of the “true” female ejaculate. PSA, produced in men by the prostate gland, is more commonly associated with male ejaculate, where its presence helps sperm to swim.

Back to my story.

Picture it: A sex-starved woman (me) meets cute, younger guy online. We have what can only be described as a two-hour sex marathon during which he managed to make me squirt at least a half-dozen times. He was so proud of his ability to make my body expel copious amounts of mystery fluid that he did it over and over again.

My partner was just proud as a peacock and I didn’t want to interrupt the mood and burst his bubble. Plus, I found pleasure in the fact that he clearly got off on making me squirt; and so it went. For hours. 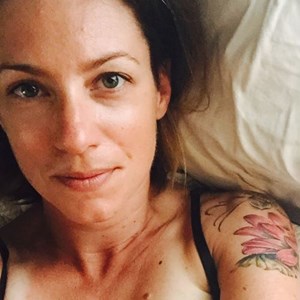 Amy is a newly single mother of two amazing children. She believes in vulnerability, rawness, open mindedness, truth, honesty and swearing a lot. She is workingher way through PTSD, trauma, codependency, her views on polyamory, her father’s death when she was 9 years old, and a recent divorce. None of it is pretty. Life just isn’t.