When It Comes to Sex, There is No Such Thing as 'Should'

I was prepared for a lot of learning experiences, both for myself and for my customers, but I was rather naive in terms of how much work there was to be done.

The dark details that quickly dawned on me centered around the surprising (for me) reality that most of our customers had very dismal ideas of what a healthy sexual relationship looked like. And while I hate to cast generalizations... yeah, it was mostly straight people.

And in most cases, it was extremely difficult to meet these customers where they were at because they were so attached to the rigid rules they had acquired from whatever dangerous resources they had previously come upon.

In the eight-plus years since, I have come to learn that the most important lesson one can learn about sex, is to unlearn everything they (think they) know about sex. I have been bombarded with so many questions rooted in assumptions based on gender, size, physical presentation, that I have developed a ritual at the beginning of every workshop I teach, where I ask my students to abolish the concept of "should" in the bedroom, because it does nothing but hold us back from our maximum pleasure potential.

I'll start with my own personal experience:

I am a gay man, which most people can figure out within a few moments after the first glance. I stand at the rather diminutive height of 5'4" tall. I have been labeled a 'twink' by some, despite my strong dislike of the term, and since becoming sexually active, I have been battling the public's presumption that I'm a bottom.

I see no shame in being a bottom, especially considering how heavily I rely heavily on their services, but it has lead to a great deal of insecurity when almost-strangers make assumptions about what liberties they can take with my body.

Having these men tell me what I should like, sexually, rather than ask me what gets me off, contributed to a lot of ill feelings about my body and my community for many years. (Read 10 Ways Sex Toys Can Help You Drop Guilt and Sexual Shame.)

Working on the sex shop floor, it didn't take me long to learn that any statement that started with the word "should" (unless I was explaining to a customer why they should use a water-based lubricant with a silicone toy) was never going to go in a pleasant direction.

I think back to several years ago, when someone decided that Ronda Rousey needed to write a sex column, and she preached to the public that using lubrication during sex was 'lazy', adding to the massive piles of insecurity attached to the idea of lube.

Since my early teens (before I was sexually active but totally reading dirty stories on the internet), it was my understanding that lube was just another part of sex. (Read 8 Tips for Choosing the Slipperiest, Sexiest, Most Satisfying Lube for You.)

I got my first packet of lube at my first pride festival when I was 14 and couldn't wait to figure out how it felt (It was ID Glide, of course, so I was incredibly underwhelmed). It wasn't until my early adulthood when I became aware of the stigma that straight people inflicted on women for using lubricant.

The reality set in on the sales floor one day when we were giving out free lube samples to all of our customers. I went to hand one to a customer that I was checking out, her eyes grew wide and she shook her head. "It's free," I reassured her.

Her head-shaking intensified. I was confounded by her reaction, but I simply shrugged and tossed the tiny bottle back into the box from whence it came, not in the mood to fight about it.

Our society wants sex to be simple. But that's not the way it is. Sex is complicated and challenging and broad and beautiful. We are doing nobody any favors by insisting that every person of a specific size/shape/gender/age/etc. get off in the exact same way.

The only way to truly be a stellar partner in the sack is to appreciate and understand the unique individual that lays before you. It is never acceptable to tell your partners what they should want or do. Plain and simple.

Sex and Technology
Click Here to Learn About Sex: Is the Future of Sex Ed Online?
by JON PRESSICK | Sex Writer, Editor, Blogger 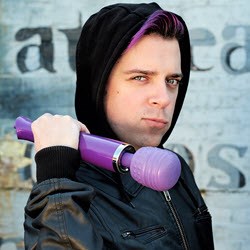 Lucas Brooks, also known as the Intellectual Homosexual, is a Boston-based writer, educator, and performer. His blog The Intellectual Homosexual has been named one of the top 100 sex blogs on the web by four different websites and magazines, including STDCheck.com, Between My Sheets, Kinkly, and Glamour Brazil. Over the last seven years he has traveled the continent with his one-man shows "VGL 5'4" Top", "Cootie Catcher", and "Exit Through the D*ck Shop". As a sex educator, he has presented at Dark Odyssey events and Catalyst Con, and at numerous colleges and universities.