We Pass Things Around: Things to Know About STIs in 2021

Reviewed by Dr. Sunny Rodgers
on July 15, 2021
Knowing how to get properly tested, ways to minimize the likelihood of contracting one and what to do if you are diagnosed are all things you need to know about STIs in 2021.

“I can hear in your voice how hard this is for you,” I speak slowly hoping the compassion I am feeling comes through over the phone. The woman I was speaking to was quietly crying. She had recently been told by her doctor that the sore she had on her vulva tested positive for herpes. “It’s very common, it’s manageable and you can have a happy healthy sex life.”

I went into my usual talking someone off the ledge herpes spiel. In this case it was herpes simplex virus (HSV) 1 that she tested positive for. HSV 1 is generally associated with oral herpes and it prefers to live around the mouth, so even though it entered through her genitals, she is less likely to have recurrent outbreaks. But even knowing this, she is taking it hard. “I feel so dirty,” she said through her crying.

Read: So You're Having and STI scare? Here's What to Do

As a sexually transmitted infection (STI) educator and counselor, I hear this a lot with a new STI diagnosis, mostly from women.

I want to reach through the phone and hold them and say you are not dirty. You are not broken. You are whole and beautiful. I also want to tell them that I went through this with herpes at age 19 and survived. Instead, I do my best to normalize the experience without dismissing their feelings. As human beings we pass things around. When we touch bodies, we can pass herpes around. It’s part of having physical intimate contact. You didn’t do anything wrong.

Any STI can be present without symptoms. The only way to know for sure is to test. How often? That depends on what you’re up to. And it’s not as simple as it may seem.

Read: What Going to a Play Party with HSV-2 Taught Me About STIs

Yet, some poly folks know it is possible to avoid STIs even when in a network of people having concurrent relationships. By keeping the network closed and having everyone test frequently and use protection. If there is fluid bonding (not using protection and allowing fluid exchange) it is only with one person at a time.

Sexual Health
STI Testing: A Breakdown of Tests You Can Take at Home
by RYN PFEUFFER

Sexual Health
Okay, but Do We Really Need to Use Protection During Oral Sex?
by GABRIELLE KASSEL

With multiple partners, testing every 1-3 months is a good idea. And hopefully having partners who are doing the same can help lower risks.

I received a request for testing from a woman who had tested two weeks earlier. I asked if something was going on. She had one partner but wasn’t sure if he had only her. Have you asked him to test? I asked. “He says he’s good” she replied. I encouraged her to consider more conversation with him. Even if he thinks he’s “good” that she would appreciate if he shared the burden.

Providers are more likely to offer this 3-site testing to gay men (as according to the CDC, the data is strongest for screening men who have sex with men for throat and rectal chlamydia and gonorrhea,) but we all have throats and anuses, no matter our gender or sexual orientation. We used to think it was just penises that could give chlamydia or gonorrhea to a throat, but I’ve seen plenty of positive throat swab results on people who state they have only given oral sex to vulvas and I’ve also seen some positive rectal swab results on people who swear they never had a penis in there. It’s possible we’re not getting the whole story, but it’s also possible that, as my now retired co-worker, long time HIV and STI pharmacist Sabahat Imran, used to say, “secretions can travel.” So do your 3-site testing.

If you are HIV positive or have a sexual partner who is HIV positive, you probably have heard the good news-- U=U which stands for undetectable equals untransmittable. In recent years, an overwhelming body of clinical evidence has firmly established the HIV Undetectable = Untransmittable (U=U) concept as scientifically sound, say officials from the National Institutes of Health. What that means is that if someone’s viral load (the amount of HIV in their system) is below a certain level they cannot transmit HIV.

Read: How, When and Why to Disclose Your STI Status

Yet, most new HIV infections come from people who don’t know they are positive. For people who are negative and possibly at risk for HIV, there is PrEP, Pre Exposure Prophylaxis and PEP, post exposure prophylaxis. These are medications that prevent HIV infection.

Another tool in STI prevention (not for HIV, but for other STIs) is a simple one. Keep your damn pubic hair. The only good news about the bald genital fashion is that pubic lice, aka crabs, are rarely seen these days, as they have lost their bushy habitat.

Yet the downsides outweigh that small victory. Downsides which include losing that protective layer that provides some protection against STI’s such as herpes, HPV (human papilloma virus) and syphilis.

Plus, people get all sorts of rashes, irritation and bumps and some end up in the emergency room with hair removal gone wrong accidents and suddenly being baldy isn’t so sexy.

You can still keep things neat and trimmed. Go to town with the scissors (carefully and slowly, assuming you don’t want to spend your date night in the ER), but stay away from waxing and shaving the most sensitive areas of your genitals. It’s like eyelashes and eyebrows. I’m keeping mine. They protect my eyes. If you care about your genitals, respect them enough to protect them.

You know your body and sex life better than anyone else. Depending on what services you have access to, you may not be able to find your perfect sex-positive doctor but at the least, look for someone who listens, answers your questions without judgment and doesn’t withhold testing. If you have a concern, get tested and encourage partners to test. Not having to worry about STIs will allow you to relax and enjoy sex knowing no matter your STI status or history, you are beautiful and whole. 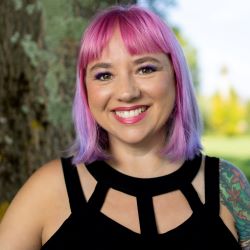 Remi Newman, MA, is a sex educator, counselor and writer with over 20 years of experience in the field of sexuality. She currently works as an STI educator and counselor in Northern California. She received her master’s degree in sex education from NYU and is a PhD student in the human sexuality program at CIIS in San Francisco.