The Erasure Of Sex Work From the Common Internet

by GRACE MARIE
Published: FEBRUARY 18, 2019 | Updated: FEBRUARY 15, 2022 02:40:18
FOSTA/SESTA has had serious ramifications for sex workers, not least which is their erasure from common spaces.

This piece was the runner up in Slixa's SESTA/FOSTA essay contest. It was originally published here. It has been republished with permission.

Maybe she used to sell her underwear on Backpage. Maybe she answered one of the advertisements on the now defunct ‘Adult Gigs’ section of Craigslist. Maybe she found a mutually beneficial arrangement and maybe that was the one and only “client” she ever had. Remember the ads marked “no pros”? Those were just for her. Maybe she went on to become a school teacher or a pediatrician or a judge. Maybe she’s married with kids now. No matter what her participation in the sex industry, up until now, she has had the option to remain somewhat anonymous.

I’m a full-on sex worker, but I started out as a dabbler, and for the first four years of my practice I was almost invisible. Aside from a few photos on my Fetlife profile (which read like a personal profile at the time), I was a ghost. I took my sweet time, anonymously cruising Craigslist and Fetlife; answering anonymous ads from an anonymous email address; figuring out creative ways to make ends-meet while juggling two other jobs, raising a kid, and going to school. It really is amazing to me that less than a decade ago all the online tools necessary for my survival in this business were free and accessible to women in every city - and not just the big cities catered to by ad sites like The Eros Guide - every city! Craigslist was effectively the anti- pimp: a safe space where adult sex workers from all over the world could freely advertise their offerings and screen clients from the comfort of their homes with no need of a pimp to broker the deal.

Read: Why I Lived & Loved Sex Work - and Why I'm Now Ready to Quit

Craigslist is kind of like the 7-11 of the internet; rich or poor, we’ve all found ourselves there at some point. And if sex workers are represented on a site that everyone uses, then it seems to follow that everyone who uses the site would slowly, almost subliminally, accept and incorporate into their consciousness that sex work is work, a viable labor option for some. Given enough time sex workers would cease to be other, at least as far as labor is concerned.

There it was - sandwiched between Admin/Office and Arch/Engineering - "Adult Gigs." It was just another option. It was no big deal.

The greatest thing about the "Adult Gigs" section of Craigslist was the most obvious thing and the thing that most people missed - sex workers had achieved visibility on a website that was supposed to be for everything and everyone, not just for sex workers. Think about the impact of that for a minute. Think about how many dabblers would have never known that their feet were worth 250 "roses" per hour or that they could sell their panties for $50, that the mere echo of their scent lingering on some fabric could command such a fee - a fee she would have had to work hours or perhaps a whole day to earn. For a while that information was there for everyone to stumble upon and, perhaps, dabble in.

I loved seeing "Adult Gigs" listed among all the rest of the working class trades. It sparked my curiosity and provided options for me, but I didn’t think about what a big deal that was until FOSTA and SESTA came into play. These bills, signed into law by U.S. President Donald Trump on April 11, 2018, greatly limit sex workers’ ability to advertise and work for themselves by unconstitutionally censoring the websites that these workers depend upon for their survival. Prior to FOSTA/SESTA, Backpage was working directly with law enforcement to help catch sex traffickers. Backpage was also making significant donations to Children of the Night, a Los Angeles based organization that helps formerly trafficked children move on with their lives by supporting them emotionally, academically and financially.

Despite all the good they did, Backpage was completely shut down by the Department of Homeland Security, and that’s not all. Skype is no longer safe for cam shows, so workers are having to give a percentage of their earnings to sites like CamSoda. Google Voice and Gmail accounts have been shut down so there is no way to ensure sex worker anonymity when screening calls and vetting potential clients. Bank accounts have been seized and adults engaging in consensual sex work are now, under the more recent Frederick Douglass Trafficking Victims Prevention and Protection Reauthorization Act of 2018, subject to wiretapping. All of this under the auspices of protecting sex trafficked children, of course. Even the personals section has been removed from Craigslist, just in case sex workers use that as a loophole to meet clients. It’s a big clean sweep for the internet and it makes me wonder why our government would want to decrease sex workers' visibility so badly?

Read: How Sex Work and Fetishization Increased My Body Confidence

I’ll never forget the first time I saw a sex worker. I was five years old and playing at a park near my elementary school with my mother. As the sun began to set, a car pulled up to the bus stop near the park and a Lady stepped out. She didn’t sit down to wait for the bus, but instead she began moving her body in a way I had never seen anyone move their body. She had one leg up on the bench and was sort of dancing, but there wasn’t any music that I could hear. She was waving to passing cars and a few of them even stopped, but she didn’t get into the first car or even the second. She obviously had the power to say "No... Next..."

I asked my mother why the Lady was dancing. My mother said that she was a hitchhiker and probably trying to get someone to notice her and drive her to her desired destination. I asked why her friend, who had dropped her off, and who was parked just around the corner didn’t just drive her there. Why was she dancing instead of sticking out her thumb if she wanted a ride? My questioning was relentless and my mother’s lies didn’t satisfy me. What was this elaborate scene I was witnessing and why didn’t any of it make sense? If my mother had her druthers I would have remained as innocent as that five-year-old forever, but I remember that Lady and I remember the internet of yesteryear.

I grieve for it, I pine for it, this extinct version of Craigslist that truly was a free market and an anonymous repository of information about the complexities of human sexuality. Another thing that I grieve is the dabbler, for she is indeed an extinct archetype. Dabbling typically hinges on anonymity. Anonymity in sex work is a thing of the past.

Oh sure, there are websites where you can advertise your services under a pseudonym, but those sites require a valid driver’s license to post an advertisement and then you’re on their list forever. A list which lives in their offices. Offices that can be raided by the U.S. government at any time. It's not exactly something worth dabbling over.

Read: What I Learned Selling My Underwear Online

Also, websites like these are specifically for sex work and only visited by people who are sex workers themselves or who patronize sex workers. One does not stumble upon these sites and that’s really important to note because, for a lot of marginalized women, the internet of yesteryear was their only glimpse into the underbelly of society; where female sexuality is celebrated, and the physical and emotional labor that we are already trained by society to embody is financially supported. To quote a good friend, after bringing her in for a double Domme session, “Everyone tells you that this kind of work will make you feel cheap, but it made me feel expensive, sexy, and powerful.”

“Everyone tells you that this kind of work will make you feel cheap, but it made me feel expensive, sexy, and powerful.”

So, the obvious question remains: Is this really a mission to stop evil sex traffickers and save helpless victims or is this just all a front for a war on information? As I see it, the war on sex workers is really more of a war on readily available information and resources that provide options and make women feel powerful. Information that liberates women from giving away their precious emotional and sexual energy for free.

Information that frees women from their societal status as prey.

Information that helps her to move up in the ranks.

Information that flips the societal script.

Information that gives her full control over her sexuality.

Information that could potentially wake her up.

For working-class women, stumbling upon sex workers and patrons of sex workers in the gigs section of the common internet can be a revelation and performing sex work can be a very cathartic and healing experience. It was for me, anyway.

Am I upset that the effects of FOSTA/SESTA are supposedly forcing some sex workers back on the stroll? Sure I am, but I’m most upset that we have been erased from the common internet and quarantined to sex worker-only sites. In this new world wide web, dabbling is dead, visibility is not really visibility, and our work goes back to being this mysterious dance that almost nobody understands, rather than just being another gig listed next to all the other gigs. 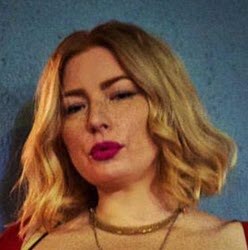