by MISTRESS KAY
Published: JUNE 19, 2020 | Updated: JULY 27, 2020 05:16:54
Presented by KINKLY SHOP
In the words of my mumbling submissive after working himself into his second hands-free orgasm with the Revo Extreme, “It's so good. I'm never losing this. A+ from me.”

Fill 'er up! Your butthole, that is. A super-sized take on the usual prostate massager, the Revo Extreme is Nexus's solution to those who want prostate stimulation - but also want to feel completely filled by their massager at the same time.

Nexus is never one to skimp on pleasure, and the Revo Extreme is equipped with an automated rotating head as well as a vibrating motor in the base. Rounding out your spoiled prostate experience, the Revo Extreme is remote-controlled, waterproof, and fully USB rechargeable. And, if you'll let me brag, it was also responsible for a hands-free orgasm - even on the first time that we tried it.

Gone are the days are the standard plastic prostate toys! Welcome in the future prostate stimulation tech!

The Sheer Size of the Nexus Revo Extreme

Don't overestimate your ability to use a prostate massager this thick. You can hurt yourself trying to insert something that's too large, and even for my self-proclaimed “size slut” of a partner, this still took a ten-minute warm-up to insert. 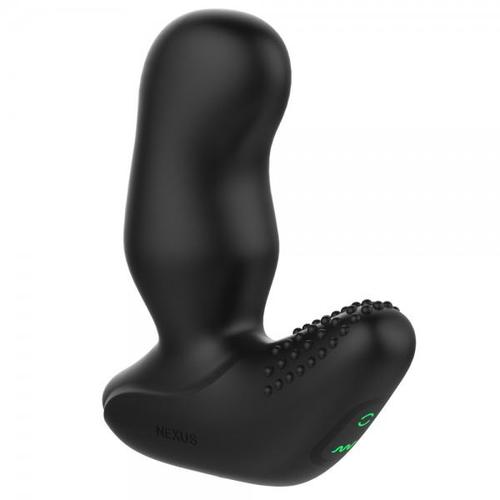 It's important to note that the stated measurement of the Revo Extreme is exactly how thick it is. It does not mess around in the thickness department.

While the head of the Revo Extreme is a little squishier (mostly to allow the toy's tip to rotate), the middle part of the shaft and anything lower (towards the base) is 100% rigid. There's no give in this silicone prostate toy at all, so when you're determining if this is a good fit, ensure you can slip in the exact dimensions of this "extreme" toy.

It will feel exactly as thick as it is. If you've played with plastic toys in the past, expect the rigidity of the Revo Extreme to feel similar to your plastic toys.

Most remote-controlled toys on the market feature a rechargeable sex toy - while the remote, itself, still requires batteries. Not-so with the Revo Extreme pair. Both the remote and the prostate toy are fully rechargeable, and they charge via the same cord. The cord only has one charging space, so you have to charge each one separately, but the only time you'll likely mind that is during the initial charge when you're eager to use the toy before that first play. After that, it's pretty simple to switch out the toy for the remote and ensure both stay charged.

I am also absolutely astounded by the sheer battery life of the Revo Extreme. TEN FULL HOURS?!!? WHAT?!?! (It really does deserve the capital letters of excitement.) That's literally unheard of is in the world of sex toys - especially remote-controlled ones.

You could wear this during a full work-from-home day - and have time to spare - with ten hours. You could probably beat a world record of longest prostate stimulation session with ten hours, honestly. It's just virtually unheard of it - and probably a bit over-the-top for most people.

I'll never use it for ten hours, but knowing that it's designed to last ten hours gives me a lot more confidence bringing it into sex sessions where I expect to be there for a couple of hours.

You'll have to "pay" for that ten hours of playtime with a bit-longer charge time, though. The Revo Extreme and remote-buddy each require three and a half hours of charge to hit full. As most people likely won't let this one fully discharge (I tend to charge my toys after each use to ensure they're always ready), you'll likely never need to use the full three and a half hours.

Poke a few buttons, and the Revo Extreme will connect to its remote. (It's as simple as pressing the power on both of them and making sure they're both on.) This slender remote makes it easy to control the Revo Extreme without contorting yourself into a pretzel to hit the buttons on the base of the plug. 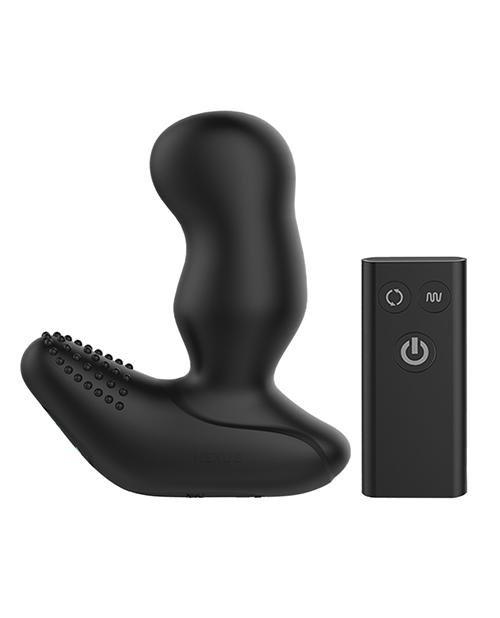 The remote has three buttons: power, vibration, and rotation. Individual buttons for each function make for easy control of this silicone prostate massager. Instantly increase intensity, decrease intensity, and turn things off at the press of a button. I gotta admit: it's pretty handy, and it makes playtime flow even better - especially when solo.

The remote control does a great job of connecting and reliably giving its commands – when in the bedroom. When you're looking at naked bodies and same-room control, it works flawlessly. It has yet to miss a command like that.

When you add in clothing or walls, though, the remote control stumbles. As long as you plan to use the remote for in-bedroom play, you'll be more-than-pleased. It just doesn't make a good friend to public play.

The buttons light up when the toy is turned on which makes it a bit easier to find the buttons - especially for partnered play.

The rotations are powerful, though - even with the clenching of internal muscles (especially as the body nears orgasm!), the Revo Extreme, true to its name, keeps on rotating. This big toy won't let you down at the moment of climax - and that's one powerful rotation motor in the tip.

I didn't find much use of the bi-directional function. Don't get me wrong; it's nifty that the plug's tip can reverse directions at the drop of a hat, but my submissive's butt didn't seem to have a preference for clockwise or counterclockwise.

I would have loved to see some neat pattern functions with the rotations instead. We've always breezed past the slow rotation setting and just left the Revo Extreme on the high rotation setting without really finding a reason to touch the opposite rotations unless "for science".

Let's bring the perineum into the party with the vibrations. The Revo Extreme has a vibration motor at the base of the massager. 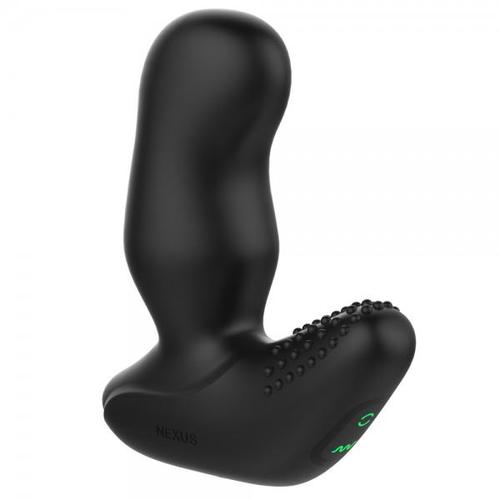 See that part with the little bumpy texture? That's where the vibrations are centered. The vibrations are lighter and surface-level - which might be exactly what you're after. Give most people a Hitachi Magic Wand, and those people don't usually place it onto their perineum! (But if you do, the vibrations of the Revo Extreme probably aren't the best fit for you!)

With every round of rotation, the base pulls up against the body (and away from the body) in a rhythmic motion - which, even with the gentler vibrations, can feel absolutely amazing. After all, the star of the show is the rotating prostate head - not the base, but Nexus managed to make the base a fantastic supporting character that adds even more to the prostate stimulation.

If you're looking for prostate stimulation at the star of the show with a bit of added sensation through the surface-level vibrations (and pleasurable texture) at the base, though, the Revo Extreme has got you covered.

Are You Taking It Out in Public?

With a 10 hour battery life, one of my first questions (probably because I'm a pervert like that) would be whether this toy is a good public play toy. I'm going to go with "no" - for two reasons.

Secondly, the remote isn't really designed for it. While the Revo Extreme's remote works perfectly when playing in the bedroom while naked, it loses some of that function when you add clothes - and even more of that function when you start adding distance. It's great for bedroom and across-the-room play, but it wasn't made for long-distance control, and it definitely shows. And nothing's more frustrating than a toy during public play when it wasn't made for it.

As a bonus reason, depending on your butt anatomy, the Revo Extreme may slide out with a bit of walking and movement. When you're hanging around enjoying it at home, it's less of an issue - and you probably move around less. When you partner the heftier base with the constant rotations, though, it can "wiggle" itself out of your butt. That becomes a problem when you're in the middle of a grocery store. 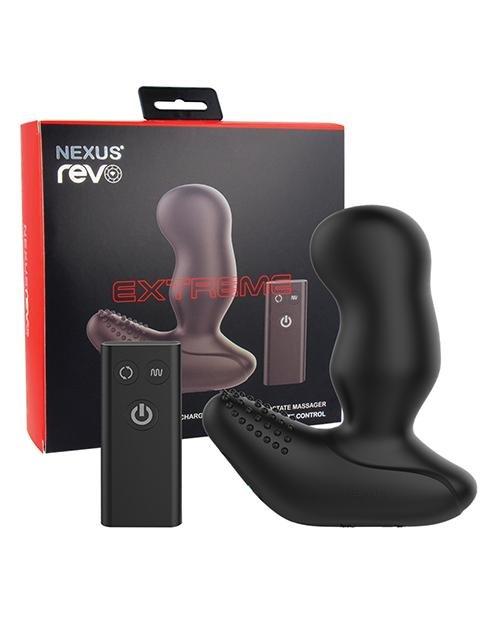 Put It All Together

The filling size is pleasurable on its own for people who love the thicker toys, but when you partner it with a thicker rotating head? The Revo Extreme doesn't necessarily need so much precise prostate stimulation. Just set it in the general area, let it rotate, and its sheer size will likely help you discover (or pleasure) your prostate.

In the words of my mumbling submissive after working himself into his second hands-free orgasm with the Revo Extreme, “It's so good. I'm never losing this. A+ from me.”