My Orgasm Is Not Your Chance To Level Up

Takeaway: Instead of centering my orgasm, why don't we put it to the side? Sex is about the both of us.

Recently, a study published in The Journal of Sex Research declared that women's orgasms function as a "masculinity achievement" for men.

Masculinity achievement sounds like what might happen if you kicked someone's butt in "Mortal Kombat," conferring upon your character both bonus points and extra weaponry. But as far as the science goes, what researchers found was that, though female orgasms are supposed to be a source of sexual pleasure for women, it's the men who are benefiting. Men who bring their female partners to orgasm report feeling more masculine because of their achievement, and they also report having higher sexual self-esteem as a result.

Men who bring their female partners to orgasm report feeling more masculine because of their achievement, and they also report having higher sexual self-esteem as a result.

Though I resent the notion that my orgasms are seen as a challenge to men that, once overcome, can allow them to level up, I also can't deny that these findings are unsurprising. Isn't it a bit of a stereotype that men who struggle to bring us to orgasm often see this as a sort of failing on their part? And where do these stories they tell themselves come from?

Whatever the source, this mindset has proven to be problematic for a number of reasons. For one, treating the female orgasm as a prize, or as an indicator of victory or success, can make both individuals and couples place more importance upon it than they should. And when you're so gosh darn focused on causing - or having - that orgasm, you don't really give yourself the chance to enjoy all of the other aspects of sexual play, that hand cupping your ass, that breath in your ear, that penis pressing insistently against your pelvic bone. We've all heard the phrase, "It's the journey; not the destination," so many times that it probably appears in our minds in a curlicued font, surrounded by hearts and rainbows, like an Instagram status update. This phrase applies to our sex lives too. We shouldn't have a destination in mind when we engage in sexual play. We should just be focused on making each other feel good. Learning what makes us feel good. Orgasm or no.

In addition to the pressure men feel to wring that tangible signpost of pleasure from us, women also feel pressure to help them experience this sense of achievement. That's quite the burden to carry, especially among women who find they can't orgasm from vaginal stimulation alone.

In addition to the pressure men feel to wring that tangible signpost of pleasure from us, women also feel pressure to help them experience this sense of achievement. That's quite the burden to carry, especially among women who find they can't orgasm from vaginal stimulation alone.

But what rankles the most for me - if only due to the language used in this research - is the fact that, for the longest time, my orgasm was my success, and mine alone. At a time in my life when I was just starting to get over my first sexual relationship - an unhealthy and emotionally abusive sexual relationship in which I was taught over and over again that my body was not my own - learning how to bring myself to orgasm was how I began to heal.

The timing of it all was perfect, really. When I was just shy of 20, I entered into an intimate relationship with a man who was six years older than me. I enjoyed discovering my capacities for pleasure with him. And he seemed to enjoy being my guide. But two months in, though I didn't feel ready for penetrative sex, he coerced me into it. The remainder of our relationship was a repeating lesson in the way my body was a vehicle for his pleasure. His wants. And while, sometimes, my body performed to his liking, many times, he found it lacking. And he wasn't shy about enumerating the various sources of his dissatisfaction. The echoes of this relationship reverberated for years, leading to fears of intimacy, self-consciousness in bed, and painful sex. There are times when I still feel broken.

Whoa, I think I actually said out loud, my clitoris still tingling, my legs still jumping in the aftershocks of my climax. What I felt was more than pleasure. It was power.

Read: How the Magic Wand Helped Shape My Orgasmic Pleasure

Since then, I have not relied upon or expected a man to provide me with an orgasm. Nor have I led any partner to believe he is entitled to experience this particular expression of of my pleasure, one that is not always readily accessible to me during partner play. Instead, my sexual relationships have been focused on everything else two bodies can accomplish together. I'm not as concerned with my orgasm, and with whether or not my partner can "master" it or "achieve" it. It's a thing I can always do for myself, or lead my partner to. If I want to.

I'm not as concerned with my orgasm, and with whether or not my partner can "master" it or "achieve" it. It's a thing I can always do for myself, or lead my partner to. If I want to.

So if a man is looking to level up by bringing me to orgasm - levels of desire and physical arousal be damned - he's going to be faced with a bit of a challenge. And I'm not interested in being a challenge.

Listen. I know that the researchers who conducted this particular study had no intention of insinuating that female orgasms within the context of heterosexual relationships were only about men. That would be ridiculous. But in examining my visceral reaction to the language used in this study, I can't help but see that they have shone a spotlight upon a cultural mentality in which we continue to treat men as conquering heroes and women as conquests. In which we treat men as aggressors and women as withholders. In which we treat sex as a means to an end, and the female orgasm as the prize.

Instead of centering my orgasm, why don't we put it to the side? At least for the moment. This sexual experience is about intimacy. It's about discovery. It's about sensation.

This sexual experience is about the both of us. 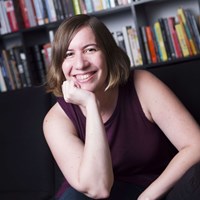 Steph Auteri has written about sexuality for the Atlantic, VICE, Pacific Standard, the Washington Post, and other publications. She is the author of the reported memoir A DIRTY WORD, and the founder of Guerrilla Sex Ed. Full Bio

31 Fascinating Facts About Orgasm
How to Charm a Clitoris
5 Things We Learned Listening to Other People’s Orgasms
16 Quotes About Vibrators That'll Have You Reaching for Yours
Getting Over Multiple Orgasm Insecurity
The No. 1 Secret to the Female Orgasm