by TIFFANY CURTIS
Published: MARCH 8, 2019 | Updated: FEBRUARY 2, 2022
Thanks to the work of sexuality professionals like writer/sex educator Cameron Glover, other Black women and femmes are learning to reclaim their pleasure

Across all industries, women and femmes of color struggle with being granted the same levels of access and equity as their white peers; this is especially true for Black women and femmes.

The SexTech industry isn’t immune to this; the faces at the forefront of the industry are still mostly white. But just because they aren’t receiving recognition at the same rate doesn’t mean that Black women and femmes aren’t putting in the work to shift the cultural conversation about sexual health and pleasure.

And the work of Black women and femme sexuality professionals is especially vital at a time when a glaring lack of comprehensive sex education in the U.S. is still failing Black youth, who are disproportionately affected by HIV and other STIs. Most sex-ed curricula boil down to instruction on pregnancy and STD prevention, with little to no focus on pleasure and consent. In fact, the U.S. government has spent over $2 billion on abstinence-only sex-ed programs since 1982.

But thanks to the work of Black women and femme sexuality professionals like sex educator and writer Cameron Glover, other Black women and femmes are learning to reclaim their pleasure. I had the opportunity to speak with Glover via email about her work as a writer, educator and podcaster, and equity within the sexual health community. Get into our conversation below.

Kinkly: How did you get your start in the sextech/sexual health community, and how has your identity as a queer, Black woman shaped your work?

Cameron Glover (CG): I actually got my start within the sexual health community as a writer. I've been a freelance writer for the last few years, and in writing about culture, I naturally started to get into sex writing for publications. After a while, I noticed that there was more of a curiosity there than with other topics so I moved into carving it out as a niche. In addition to that, I wanted to be able to reach people outside of just writing articles; there were questions about health, identity and representation that weren't being covered and people really needed access to.

Moving from just writing to going into working on my sex educator certification was mostly led by the curiosity and passion I have for everyone to have access to sexual empowerment tools. Being a queer, Black woman with chronic pain, I'm too aware of the toll it takes to constantly seek something that doesn't exist, or to have the access to information be led by people that don't share your experiences. So I'm hoping that the work I'm doing and continuing to do will help break that and put action behind the declaration that pleasure is a RIGHT not a PRIVILEGE.

Kinkly: What do you think are some of the most prevalent issues within the sexual health community right now, and whose voices do you want to hear more of?

CG: I think a lot about access and action in the sexual health community; as speaker and fellow sex educator Ericka Hart puts it, "Who is this for?" I think that there are some incredible things happening (especially in SexTech) but considering who is able to access these things and who is kept out because of the inherent bias placed into them isn't getting the focus it should. I want to see more change happening in mainstream sexual health that considers the people who exist at the margins from the beginning rather than being an afterthought.

Kinkly: "Inclusion" and "diversity" feel more like buzzwords these days, in pretty much every industry. What do you think equity in the SexTech/sexual health community would look like?

CG: I believe that equity in SexTech and the sexual health community is completely within reach, but it takes a reframing of the ways we already interact within these fields. On my podcast, I often refer to this idea of "passing the mic." It's this idea that we reframe who is "allowed" to lead and take up space and instead look at how we can support people that are already doing it, just outside of our awareness.

I think the idea of "inclusion" and "diversity" has a lot of white people in the field thinking that they have to do all of these things to create inclusion themselves, when it really just looks like stepping back from the spaces they're in and passing the mic - the platform, the visibility, the resources - to marginalized folks that are already doing the work, because we're here.

Kinkly: You launched your podcast, "Sex Ed In Color," last year. What inspired you to launch your own sex podcast, and what are some of the topics you plan to tackle this year?

CG: Yes! So Sex Ed in Color was actually a response to the Kinkly article that was published back in August 2018 that mentioned "sex educators to follow on Twitter" but didn't include many Black or non-Black people of color. (Editor's note: The piece was updated in response to comments like these from readers and the online community.) Like many others, I was frustrated by the list and the erasure of the work that BIPOC sexuality professionals contribute to the field, but I wanted to take some kind of tangible action once my initial anger passed. And the response has been incredible; clearly I wasn't the only one that was hungry for a podcast like this!

I'm so excited for the conversations I'm having and plan to have for the episodes coming out this year. I'm planning to have dedicated episodes on SexTech and digisexuality (two of my favorite topics), the history of polyamory, and plenty of POC-specific resources for sexual violence for April.

CG: There's so much inherent bias that seeps into teaching and sharing education, and so many of the sexual health resources that are shared are still largely assuming that the people that need that information are straight and cis. We're still hearing so many stories of doctors assuming that being queer in any way means there's no need for a safer sex conversation, family planning, contraception... There's also incredible transphobia within professional settings that make access to information or tangible resources even more difficult for trans folks. So yes, I think that both the inclusion of queer folks in sexual health and the variation of how queer identity can be expressed, lived and experienced needs to be so much better.

I also think that it's important to remember that people from a similar community may not experience marginalization in the same way. In addition to all of this, making sure that those of us in the field are able to center folks that experience multiple marginalizations is vital. We need to end the assumption that folks cannot be queer AND experience chronic pain or disabilities AND be of color, among other identities.

Kinkly: Name three Black women/femmes in the sexual health community whose work you admire, and why?

CG: This is such a hard question because there are way more than just three folks I can think of that inspire me. But I'll mention:

Ericka Hart. Their work is so important and the way that they are able to integrate sexuality as part of other social justice issues truly, truly inspires me. I also think that Jimanekia Eborn (another sex educator and host of the "Trauma Queen"podcast") is doing incredible work; I'm in such awe of the way she's able to help people learn to heal from trauma and sexual violence. And lastly, Afrosexology. They're amazing at creating conversation and bringing the resources directly to the community, and not holding it behind gatekeeping or policing language.

Kinkly: It can be hard to feel seen as a woman/femme of color doing work in the sexual health community. How do you practice self-care, and form intentional connections with other women/femmes of color in this field?

CG: I'm actually really intentional about practicing self-care. For me, it looks like: making sure I'm drinking enough water, cooking as often as I can. Calling my friends (I'm the rare millennial that actually likes being on the phone). Having a solid haircare routine because even moisturizing my scalp can be a necessary, meditative touch. I've also been getting back into giving myself Tarot readings and having dedicated times where I unplug/put my phone on airplane mode. And baths. Lots of baths.

I also think that forming relationships with other women and femmes of color in the field is SO important. We can't afford to see each other as competition and withhold support from one another. Even if it's as simple as following each other on social, commenting and resharing (with credit) in our own circles, or teaming up with collaborations (like I did with sex writer Gabrielle Alexa to create a free workbook), there's room for all of us, and forming these connections not only makes it a bit easier but helps success blossom naturally. We can accomplish so much more by teaming up. 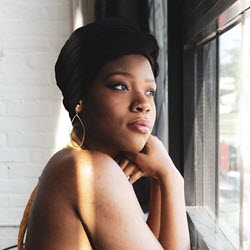