In the World of Black Kink

by MARLA STEWART
Published: FEBRUARY 25, 2022
Sexologist Marla Stewart delves into the history of Black kink and where we are now.

Being Black and kinky used to be incredibly taboo. Although there has been documentation of Black kinksters since the 1930s, it was largely because of the pornography industry displaying Black bodies in bondage for sexual arousal; most likely to be provided for the white male gaze. Black bodies for the white gaze is nothing new, as Black people and bodies have been on display all around the world; most notably during the Transatlantic Slave Trade and exemplified in the world famous Saartjie Baartman, a Khoekhoe woman who was brought to Europe in the early 1800s and dehumanized like a museum exhibition.

By the 1980s, there were a couple of leather/kink organizations (LA Brotherhood; Brothers in Leather) headed by Black men (whom were mostly gay), and the first Black man, Ron Moore, won the International Mr. Leather competition in 1984, which inspired more Black people to enter into more competitions.

In the mid-1990s, Black leather organizations quickly formed and expanded. The largest organization, ONYX, formed by Mufasa Ali, for Black men, is still up and running with the relatively recent expansion for women, dubbed the ONYX Pearls (in 2008, with 2016 being the inaugural line).

This rapid expansion into several different large cities in the mid-90s prompted more readership and Black Leather in Color magazine aimed at documenting Black kinksters from around the country. Between 1993 and 2003, the first competition for people of color, Mr. Ebony In Leather, conducted eight competitions over 10 years. However, one of the most iconic moments in Black kink history is when Genelle Moore won the International Ms. Leather competition in 1997, making Genelle and Ron the first (and only) biological siblings to win these competitions. Now, there is a slew of Black folks who have won many different types of competitions over the years, including Jack Thompson, who was the first trans man of color to win the International Mr. Leather competition in 2019.

The 2000s and the 2010s flourished in the realm of Black kink. In-person events, such as Black Beat, Weekend Reunion, and Atlanta Peachy Kink, added to the depth and awareness of Black folks indulging in kinky pleasure. Even more events and conferences dedicated space for kinky POC, such as the Sex Down South Conference. Mufasa Ali started the Mr. Leatherman of Color competition in 2005 and has conducted 11 competitions over 14 years with the global COVID-19 pandemic pausing most in-person events.

However, before the global policy of sheltering-in-place in 2020, 2019 offered a robust look into the kink world. Kandi Burruss, known for her popularity on The Real Housewives of Atlanta, and for her signature sex toy line, Bedroom Kandi, popularized kink and dungeons by bringing awareness of kink to mainstream Black audiences.

She then led a major city tour, which had celebrities dressing in kink attire, but not actually indulging in any traditional kink, which, in turn, misled many Black people into thinking that kink was something that it wasn’t. This same year, Jet Setting Jasmine, King Noire, and I did a dungeon tour across the country showcasing our skills by educating locals and letting them indulge in play at their local dungeon. What was particularly interesting is that the Black folks who signed up thought we were copying Kandi, not realizing that we had been kinksters for many, many years. When we showed up to their city and they actually saw a real dungeon and what actually happens at a real dungeon, many of them were enlightened, and I continue to see a lot of them at my local dungeons to this day.

By 2020, the topic of race was ever so prevalent with the murder of George Floyd at the front and center. With everyone sheltering-in-place, we got to see more of the racial tension than ever before, which prompted Luna Matatas and I to spearhead our discussion series, appropriately titled Race & Kink; particularly because we saw how the racism was bleeding over into the kink community and not for the better.

Bringing in POC kink icons, such as Midori, Mufasa Ali, and Jack Thompson, our goal is to share the stories and experiences of how their race has impacted their kink life and vice versa. Coming from an intersectional perspective, we get to get deep and personal and gain a broader understanding of their life.

But as Black and kinky people, our comfortability is dependent on a variety of factors. It is always an interesting journey and despite not being a monolith, there are some common shared experiences.

But if you ask most Black kinky folks, we tend to enter the world of kink alone; often going into spaces that are predominantly (if not all) white. In these spaces where we hope to play in a scene and access our own pleasure, there’s a high probability and possibility that we will be fetishized in the space.

There is the possibility of at least two things that might happen:

1) you go into the space only for no one to approach you and you end up not feeling wanted, which could deter you from participating in kink in the future, or

2) you get bombarded with possible play partners who may have never played with a Black person and haven’t done their homework around race relations and play. Either way, there’s always a risk involved that could either dampen or enlighten our spirit.

As a Black, kinky, queer, sex-positive educator who is proud to be a leader in this Sexual Liberation Movement, I’ve learned quite a bit with regards to our history. However, it’s the future of Black kink that gets me particularly excited. Our future holds the following:

Overall, as Black and kinky folks, we have to acknowledge our history, and focus on the present to ensure a pleasurable and beautiful kinky future for all the Black, young, kinky people that will come after us and push the sexual liberation movement forward. We have the innovation, the ideas, and the resilience to make us successful, so let’s get to work! 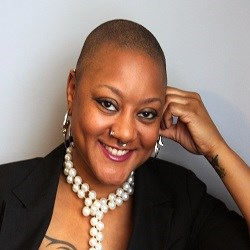 Marla Renee Stewart, MA is a sexologist and a sex coach who runs her own
sexuality education company, Velvet Lips and is also a Co-Founder of the Sex
Down South Conference. She has studied human sexuality for more than 19
years and has given over 400 workshops all over the world.

She also has been featured on a variety of media outlets, including Netflix’s Trigger
Warning with Killer Mike and Love & HipHop Atlanta. She co-wrote her first
book, The Ultimate Guide to Seduction & Foreplay with Dr. Jessica O’Reilly,
which debuted in April 2020.