by KAYLA LORDS
Published: OCTOBER 3, 2017 | Updated: FEBRUARY 2, 2022 02:11:46
Presented by ODDO LEATHER
As long as something isn’t a hard limit, being open to trying new kinks can have unintended and potentially wonderful outcomes

Kinksters are constantly told you don’t have to do kinky things you don’t want to do (excellent advice) and to find the kinks you have in common with your partner before playing. That’s all true, but we don’t always talk about the things we’re not interested in but aren’t hard limits. For me, that was bondage. My partner loved it but I thought, “Meh.” My decision to try it was based on my desire for his pleasure. My willingness to keep doing it, however, was because of what I discovered about bondage and our relationship.

The first time my partner mentioned he’d like to tie me up, I shrugged. The second time, I responded, “I don’t think it’s my thing.” Not being able to move didn’t appeal to me. I worried about the purple limbs and cut off circulation I’d seen in porn. When I’m being really honest with myself, I worried I would feel trapped or more out of control than I could handle. But I didn’t have the visceral, immediate shuddering reaction that I do when someone mentions things I have a hard limit about, like urine, feces, blood, or needles. (As always, if you’re into that, cool, but it’s not for me.)

Even so, bondage and being restrained didn’t make me curious. I didn’t care about particular styles of ropes or restraints. Frankly, when my partner talked about different ties or told me about books he read, I paid little attention. OK, I zoned out and my eyes gazed out into an unseen distance. There were so many other fun things to try. Spank my ass! Force some orgasms! Pull my hair! Call me your dirty little slut, and smack my face! But bondage? Meh.

It’s not uncommon in any relationship to do things with your partner that you don’t really want to do. I don’t mean in a non-consensual way or a manipulative way. With bondage, it was different. As his submissive, I wanted to please him. I wanted him to have the things he desired. As long as I could stop the play if necessary and trust him to honor my wishes, why not try it?

Being Tied Up for the First Time

That’s where I was when I finally agreed to try bondage. Did it help that he picked out a beautiful, vibrant blue rope that was super soft to the touch? Of course it did. Seducing my consent with the promise of something that feels good is how D/s ought to occur. Treating my consent as a given is problematic at best, abusive at worst. Ultimately, I was willing to try anything that wasn’t a hard limit, and he craved the rigger role. As a partner who loves him and as his submissive, I wanted him to have that moment.

The first few minutes were awkward for me. I didn’t know what I was supposed to do. He unfurled the rope, getting it into position. I quickly discovered my job was to stand still in the position he placed me in. This proved difficult. I shifted my weight from foot to foot. My arms swung at my sides. When he lightly smacked me in warning, heat pooled between my thighs. As his hands worked around my body, his fingers glancing off the sensitive skin between my legs or around my breasts, I shivered with desire. Oh yes, I thought, this would be OK.

He wound the rope around my body, creating mysterious patterns. Each new pass of rope tightened the one before it. It wasn’t unbearable. In fact, it felt like a hug. The more rope that passed this way and that, the more secure I felt. Now, not only was I incapable of fidgeting, I didn’t want to. Between the throb in my clitoris, the tightening of my nipples, and the solidity of being bound, I felt controlled and small, his toy to play with - his clay to mold. It was a feeling I enjoyed for its connection to our D/s and the sensuousness of the moment. 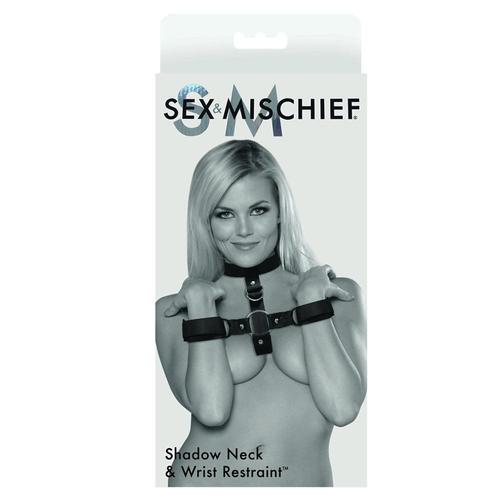 Rope not your thing? Bondage sets like the Sportsheets shadow neck & wrist Restraint shown above are great (and safe) for bondage beginners.

How Bondage Factors Into Our Relationship Now

After that first experience, bondage of any kind definitely wasn’t a hard limit. Once he unbound me, I marveled at the temporary marks on my skin and the way the air kissed my flushed skin. Somehow, once unbound, I felt more naked than before. Did the moment end with hard fucking and all the kinky play I really love? Absolutely - some as a reward for being willing to try a new thing, but primarily out of a mutual desire from the shared intimacy of rigger and rope bunny. Even now, bondage may not be something I ask for, but when he says, “I’ve got a new tie I want to try!” I’m much more enthusiastic.

As a wiggly, giggly babygirl, standing still is still hard for me. Part of the fun is in the sharp smacks I receive until I settle down. Being a submissive with a desire to please my Dominant, allowing myself to be the object of his pleasure even when it does little for me fulfills me on a deeper level. And, as the woman who loves to be turned on, teased, and fucked, each time he “accidentally” brushes my labia with his hand or grazes a nipple, I know it’s not just part of the bondage scene but a promise of what comes after I'm unbound - and sometimes even before.

Bondage isn't just about rope - in general or in our relationship. The act of being restrained - in a hogtie with leather cuffs or to the bed while he forces orgasms from my body - is simply another form of submission, one that takes away all appearance of control. It scared me in the beginning. Now, as the trust between us has grown, I look forward to it. He varies the toys and tools he uses but the end result is the same. We each revel in our unique side of a visceral power exchange.

As long as something isn’t a hard limit, being open to trying new kinks - with a trusted partner - can have unintended and potentially wonderful outcomes. Having a good experience the first time means that the next time I hear about a kink and think, “Meh” I’m more likely to give it a try. Will it always end with a great experience and a new way to play? Of course not, but being open to new things can take you to places you didn’t realize were even possible. I'm glad that place turned out to be in bondage.

Ball Gags: Why They Aren't Nearly As Hardcore As They Look
by ANABELLE BERNARD FOURNIER

MORE FROM ODDO LEATHER
All Articles

Ball Gags: Why They Aren't Nearly As Hardcore As They Look
by ANABELLE BERNARD FOURNIER