I Miss Being Visibly Queer at Pride

by BETTY BUTCH
Published: JUNE 1, 2021 | Updated: JUNE 2, 2021 02:44:07
The pandemic necessarily meant cancelled Pride parades and events. Writer Betty Butch reflects on how this has felt like a return to queer invisibility.

Pride is an overwhelmingly colorful event. The flags that celebrate different sexualities and genders are all striped with bright, bold colors; they dance in raised fists and from the spires of parade floats. Queer people jostle past wearing rainbow tulle skirts, neon neoprene chest harnesses, sequin fanny packs and piles of multicolored bead necklaces. There are people kissing on sidewalks and in the shade, leaving behind bright lipstick prints, smeared glitter, and sultry laughter. Later, when the sun goes down, there are disco balls, glow sticks, and fireworks.

Last year, my city’s Pride celebrations – which are held in October – were canceled due to the pandemic. It was a necessary, obvious decision. But its absence weighed heavy on my heart.

I have plenty of criticisms of Pride, including the prioritization of ally tourism, corporations, and police. There isn’t enough being done to make Pride accessible, safe, and inclusive of disabled folks, people of color, trans folks, and people in addiction recovery.

But in spite of its shortcomings, attending Pride is often the highlight of my year. It’s a healing experience that helps me endure the constant barrage of anti-trans legislation, rising hate crime and suicide statistics, and everyday harassment and othering.

Pride, of course, began as a riot, and by its very nature it remains a protest. A big part of that protest is what makes it so nourishing for me: being openly, intentionally queer in public.

Read: Loud and Proud: 5 People Share How They Came Out

“The main goal [of the first Pride march] was visibility for a community that had been pushed to the margins of society. Being out and proud was a revolutionary act,” points out Danielle Bainbridge of Origin of Everything. The march – which was spearheaded by bisexual organizer Brenda Howard – took place in 1970, a year after the Stonewall riots. “In the beginning, most attendees wore their everyday clothes, but some began to wear elaborate costumes to punctuate the radical act of being seen.

As a queer, nonbinary trans person, the safest way for me to move through the world is to be invisible. Every discernible deviance from the “norm” – holding my partner’s hand, undergoing HRT, wearing “men’s” clothes or queer fashion trends – runs the risk of catching a bigot’s attention and ire. Bigots come in many forms and levels of influence, from family members, neighbors, and coworkers, to landlords, doctors, and government representatives. Their attention can have dire consequences, so I have to weigh every haircut and public display of affection against the possibility of alienation and violence.

Advertisement
But when I enter an unapologetically, celebratory queer space like Pride, those discernible deviances are the norm. It’s normal to use my partner’s pronouns in public conversation, and to kiss them under the fireworks. It’s normal to dress how I like to dress, let my face get scruffy and still wear makeup, and speak in a voice that feels right for me. I’m still vigilant, but I’m not alone. Read: Am I Queer Enough?

The last time I went to Pride, my partner and I handed out small pride flags. We had hundreds of the traditional rainbow flag, but also flags for pansexuals, asexuals, bisexuals, and trans people. Several people admitted it was their very first flag, either because they had to remain closeted for safety, they weren’t ready, or because they didn’t know pride flags for their identity existed. We cried when we saw those same people at the parade, happily waving their flags at passing marchers and floats.

Visibility through community gathering and celebration is crucial for marginalized communities. It is a statement that we exist, that our experiences are real and our burdens are shared, and that we persevere despite erasure and oppression. Being visible pushes back against the idea that we’re too few to matter, or too ashamed to thrive.

These statements are especially important here in Orlando. In the aftermath of the 2016 Pulse shooting, there was a concentrated effort by the media and politicians to minimize the fact that the victims were targeted because they were Hispanic and LGBTQ+. It took our governor two days to just tweet the phrase “LGBT community,” and he only did so after continuous local push back.

Advertisement
Every year since, 49 people honor the 49 lost by walking in the parade wearing white fabric gowns with huge angel wings. The costumes were originally created for the funerals of Pulse victims, so that people on the street could shield mourners from anti-gay protesters. They’re a reminder of who we lost, but also of how bigotry never rests, and how even in our grief we figure out ways to protect each other and keep going.

Read: Navigating Pride as an Ally

Spending a year in quarantine has been hard for so many reasons. It’s been a relief to be at home and not worry about how strangers are going to perceive/treat me (a whole year without being misgendered in person!), the isolation from my local community has been rough. Stepping away – even for good reasons – has felt like surrendering pieces of myself again

Pride had been my yearly reminder that – for me – the risks don’t outweigh the benefits of being openly trans and queer. Being surrounded by people who recognize me as my whole self, who dare to celebrate it in the face of persecution and erasure, gives me confidence and strength.

The reminder that who I am is normal helps me be the kind of person who still pauses before they out themselves to strangers, but goes ahead and does it anyway. Who presents however they want to present. Who educates or corrects people who misgender them. Who is openly their whole self, because while there might be a bigot watching or listening, there might also be someone in the closet who’s desperately waiting for permission to exist. It helps me be the kind of person who hands out pride flags.

I am so grateful that my partner and I were able to get vaccinated this summer. Hopefully the number of vaccinated folks will continue to rise so that we can safely attend Orlando’s pride celebrations this October. I miss being surrounded by color in a world that would prefer us to be invisible. 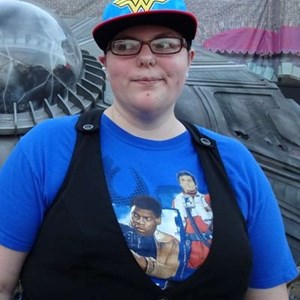 Betty Butch is a queer sex writer, kinkster, and sex toy enthusiast. In 2018 they launched a blog to share personal essays and comprehensive sex toy reviews from a nonbinary perspective. Much of their work focuses on fat positivity, autism acceptance, and shame-free pleasure. You can follow them on Twitter, Instagram, and Facebook.