“I’m nervous,” I texted back, but what I really meant was I Am Very Straight. What if I feel intimidated, left out or turned off; I thought. What if I fall into the no-win trap of Comparisons?

I’d reached a breaking point, unable to survive even one more day of crushing isolation and worry after eight weeks of solo quarantine. I needed someone to touch me, comfort me, fuck me, show me love (or something like it). I needed to feel human again, and who better to help than a man who lights me up like Christmas at Rockefeller Center? His nickname’s not about ancestry, or geography.

I’ve known since he and I met nearly a year ago that he’s into group sex. Sure, I’ve fantasized about more than one man in my bed—but this was real life and Kelly wasn’t my fantasy. I just stood there, drenched in sweat, staring at my phone. I do like to try new things, but—

“She’s great,” he continued. “Very charismatic and easy to be with. Maybe you two should go for coffee. She and I have played with straight women before, and they all had fun. But we can skip it. Or meet up with her later this week. Or never.”

Kelly picked me up for coffee, which—if all went well—would bring us back to my hotel room to meet Mr. Rockefeller. I figured her one job was to put me at ease, so I was surprised when she immediately started referring to herself and Mr. Rockefeller as a “we.” We’ve fucked in this car so many times I had to have the upholstery professionally cleaned. We’re into this, we love that, we’re practically twins we have so much in common."

Maybe she thought the stories would turn me on, but mostly it felt like she was marking her territory—making sure I knew I was on the outside. Ten minutes in, I was ready to call the whole thing off. Caught up in feeling unwelcome, uncomfortable, and out of my depth, it didn’t occur to me that she might have some feelings about my arrival, and that it was also my job to put her at ease. Knowing I couldn’t control anything but my own reaction, I decided not to get defensive. Instead, I did a lot of blurting.

“I feel like it’s weird that we’re all assuming you want to fuck me just because I showed up today,” I said. “Sure, you like women, but that doesn’t mean you’re attracted to me specifically. Also, I’m worried that you’ll feel rejected if I don’t want to touch you. Plus, I’m worried that I’ll wreck the party or come off like a prude if I say yes and then change my mind. Also I’m not interested in a big drama, so how do I politely escape if I want to?”

“Okay,” Kelly said, and smiled. And then, seemingly out of nowhere, she became exactly the guide I needed. All the tension dissipated; suddenly, we were friends. “First of all,” she said, “I do want to fuck you—so check that off the list.”

She gave me the eye while I blushed and stammered, then cracked up laughing at not knowing how to be flirted with by a cis-woman. I was nervous in a good way, finally.

“You don’t have to touch me. You don’t have to do anything you don’t want to,” she said. But I already knew that. I’m not someone who feels pressure to perform or stay in situations I’m not enjoying. My issue was choreography.

“Literally, how does it work,” I asked. “Like, we’re all in the room, there’s music on, he walks in, we’re all staring at each other—then what?”

“I tend to be submissive, so he’ll take the lead,” she said. “Probably he’ll kiss you. He’ll touch you, and if you want, I’ll join in. We’ll all end up naked, and he’ll do all the things you like. He and I both like to please, so while he’s paying attention to you, I’ll pay attention to him. He and I can double up on you, if you want that. You and I can double up on him. Anything I need, he’ll give me; you don’t need to worry about me.”

I took a few long sips of my coffee, picturing different scenarios. She made a lot of eye contact, which I avoided, but liked. Her eyes were gorgeous. “Okay,” I said. “And if I’m not having fun I’ll just head out to the pool?”

“Of course,” she said, as we walked into the hotel. “But I doubt that’ll happen.”

Note to self, I thought. Arrange an exit strategy. That plan made everything seem simple.

Our opening scene played out just like Kelly predicted: I poured myself and Mr. Rockefeller a splash of bourbon, Kelly declined. We moved to the bed, where he told her I have spectacular breasts. It was the perfect move; he knows I’m vain about them.

3: Boundaries Can Change—Or Not

Often, I had no idea who was doing what to me, and it turns out it didn’t matter at all.

It was the easiest thing, to lose myself in the blur of mouths, hands, and tangled limbs. Two mouths and four hands were twice as nice as one and two, and that’s the only thing I ended up caring about.

None of my other boundaries shifted that day, and I was so relieved not to feel judged by the limits of my attraction or experience. There’s a lesson, I thought. You can just meet people where they are, and it doesn’t have to be a big deal.

Read: How to Plan a Gang Bang

4. Give Everyone What They Want

He’s got you covered. He knows that I like a lot of sensation but not pain, and that my G-spot can be finicky; Kelly likes impact and a lot with the G-spot. He was prepared for both, as always.

Oh, right, I thought, when he took out a toy for Kelly he’d never used with me. Tailor the experience, even if it’s a group experience. It seems so obvious when you say it out loud.

5. Group Sex Can Be Intimate

I expected the overwhelm of hedonistic pleasure: ice cubes on sweaty skin, orgasms so intense he shook, she squirted, I cried. None of that was surprising. What I didn’t expect was intimacy—intense emotional exchanges that belonged only to me and Mr. Rockefeller.

Just once that afternoon, my mind drifted; he wasn’t looking at me, but he felt my energy shift—and there he was, laying a hand on my chest, meeting my eyes. “You okay?” he whispered, too low for Kelly to hear.

I nodded and felt myself return to the room, my body, the experience underway. He stayed with me until he knew I was back for good—and I felt a surge of emotion bloom inside me. Something a little like love.

I’m sure he and Kelly had these moments to, though I never saw them; I wouldn’t have wanted to. They deserved to have their own experience, too. She also deserved to feel fully seen and cared for (plus good and properly fucked).

Remember that, if nothing else, I told myself later that night, exhausted and sore in all the best ways. That’s today’s real lesson—to be there for everyone in the room. 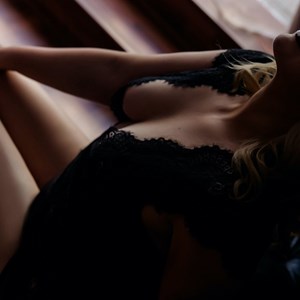 Misty Blue is a Seattle-based writer who believes that satisfying one’s curiosity is the key to sexual pleasure—and that pleasure-seeking should top the list of pretty much any day’s Things To Do. She grew up religious (read repressed), and has spent the last decade consciously exploring her sexuality and writing about paradigm-shifting experiences including Tantra education, sensation play, orgasmic meditation, shibari, power exchange, and more.