How Kink Helped Me Learn to Love My Fat Body

by CARMEN WILLIAMS
Published: JUNE 18, 2019
Kink can be fun, yes, but it can also allow for space for those who've always felt inadequate to learn to love themselves and their bodies.

The first time I heard those words, I felt powerful. I felt seen. I felt sexy. Most importantly, I felt like this was the beginning of a self-awakening that would help me become more confident. This was when I realized that kink was helping me become who I really was.

I had had previous sexual relationships which were very vanilla. While the sex was still fun, I didn’t feel this amazing sense of self after. Nothing like I experienced when I was doing a scene.

I battled self-esteem issues for a very long time. I remember feeling ugly and fat (when I still believed fat was a bad word) when I was just five years old. I was taunted for not being small, petite, and pretty like my friends and cousins. Instead, I was tall for my age, wore bigger clothes than my smaller companions, and didn't look cute in those horrible pink frilly dresses my mom tried to make me wear.

The older I got, the more I seemed to hate my body. I also struggled with two undiagnosed mental illnesses and had no support or help from anyone. I felt very alone. There was a lot of self-sabotage, bad decisions and self-harm. I was completely unhappy with this body that was soft and round in the “wrong” places and was bigger than the girls who were considered beautiful.

My Introduction to Kink Helped Me See My Body as Glorious

While I grew a little bit more confident in my body as I got older, it wasn’t until I experienced either being tied up or doing the tying that I realized my body was a glorious thing.

Then he went into dom mode and told me how beautiful I was laying there, naked, waiting for him to tease me. He spoke to me in this brisk, but sexy, tone. I was enthralled.

While there were commands and spankings and being told to be a "good girl" for my master, there was also consent every step of the way, and I was assured that if at any time I felt unsafe or uncomfortable, I could stop and he would embrace me and we would discuss the scene.

I never needed to stop because the entire time I felt so incredibly alive. I felt like I was being seen. Like I was finally being told that my pot belly and thick thighs were not just OK, but beautiful and that they needed to be celebrated.

I Learned More About My Interests

Then, we discovered that I was, in fact, switch. I could alternate between dominant and submissive depending on the situation, partner, or my mental state at the time. I was eager to try being the one in charge for once, but also a bit scared of messing it up.

I bought myself a black corset, black lace panties, and silky, knee-length socks. I brought a few props with me and let him back into his bedroom while I was all dressed up; his face was more than enough evidence that I had done the right thing with my outfit.

If you know anything about dom/sub relationships, you’ll know that while the dom has a lot of power, it’s actually the submissive who is in control. Nothing happens without them being OK with it and without boundaries being discussed beforehand.

This being said, after my initial timidity, I really got into my role and had him call me “mistress” and beg me to do things for him. That moment was the sexiest I had ever felt in my life.

Over the next few days, I was in an excellent mood. I realized that this was due to my play time. It was helping me to understand that I was sexy. That I was strong and beautiful and worthy of praise. Most importantly, it made me realize that I deserved to have good sex.

I Am a Goddess

Whether I was dominant or submissive, playing a scene helped me tap into this other side of myself, a side that was always there and willing and ready to try anything, but never had the guts to do it before.

Now I was taking back my power. Now I was willing to accept that I was more than just the fat girl everyone made fun of. I was beautiful and smart and amazing and full of sass.

If either of you has ever struggled with body issues and self-acceptance, then, in my opinion, sex is a great way to affirm to yourself and your partner that you're both beautiful and sexy and worthy of praise and affection. It's such an intimate thing for two (or more) people to share. Why not add to the fun and also throw in a few compliments and actions to show your partner(s) that you do think their body is a wonderland? 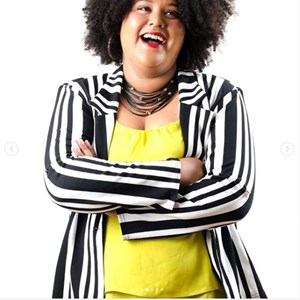 Carmen Williams is a freelance writer from South Africa. She prides herself on being a strong feminist as well as body and sex positive. She’s always been a writer, even if there was that mad two years where she thought she would become a scientist. Carmen loves writing real stories by real people and thinks every person has a great story to tell. She loves pugs, Harry Potter (seriously, she’s even got a tattoo) and bad, one liner jokes and is still waiting for that moment she realizes she’s an adult.