From Little Orgasms to Badass Ones: How I Learned to Be More Orgasmic

You may remember me from my story about finding my first orgasm with the Sola Egg Massager. I am a 31-year-old married woman with kids and - until recently - a very limited experience with sex toys.

A little more of an update. Since working with Sola’s resident sex educator, Ducky Doolittle, to increase my orgasmic potential, I’ve enjoyed my first-ever orgasm (plus a few more!), have built some confidence and have even brought up sex with my husband more often (he’s pumped!) Now, just a few months later, I’ve already graduated to my second sex toy – and more lessons from Ducky on how to increase my orgasmic potential. Or, as Ducky likes to say, how to have a more bad-ass orgasm. Alrighty then. I’m in.

When Ducky set me up with my first toy, the Sola Egg Massager Passion Set, I had my first orgasm. And, well, I was thrilled. But it was small. A wee bitty baby orgasm. The next step, according to Ducky, is to get better at recognizing my arousal and response cycle, and to strengthen the orgasmic pathways I’ve been building. When it comes to orgasm, practice, apparently, makes perfect. This time, Ducky recommends I try a powerful wand massager called the Sola Sync Pleasure Wand.

Being a little bit of a newb to this whole sex toy thing, I was a little intimidated - to say the least - upon unboxing the Sola Sync. The toy is large and purple and it kind of looks like someone cut the forearm off a Teletubby and put it in a box! 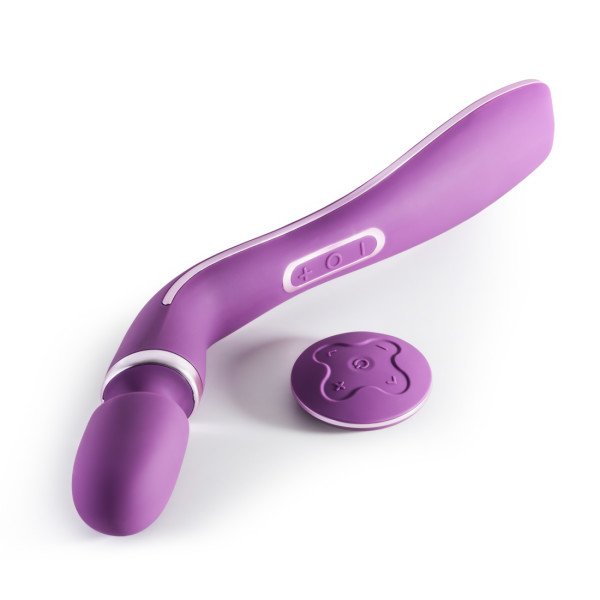 Is it just me or does this look like a Teletubby's arm?


I should add that until receiving the Sync I had never even heard of a pleasure wand, so maybe my reaction was a little out to lunch. Either way, when I first turned it on I was surprised by the power, I mean really surprised! I am an equine massage therapist and my initial thought was “wow” this would work well on my horse’s sore muscles! Anyway … back on topic.

So, will that mean I won’t be able to orgasm without it, I wonder?

Ducky says that old myth just isn’t true. While our bodies might get used to an awesome vibrator’s super orgasmic powers, it’s just because our brains like to get the job done. If I find I can’t orgasm any other way, I can always switch things up to teach my brain that my nethers aren’t a one-trick pony.

We'll get to my experience with this vibe in a minute, but I will say this up front: The Sola Sync delivers an orgasm in three minutes flat. Every. Single. Time.

“Sex education often is riddled with bad or incomplete information, which means that most people are completely self-taught, having never even been given the tools to know how to learn it. This results in a lot of mistakes, which can be very discouraging” Ducky explains.“Many people never move past that. Others know there is something more out there but just don't know how to go about finding it. It is important to remember that this is a process and the first steps in this process involve becoming familiar with your own needs.”

In order to improve my sexual response cycle, according to Ducky, I need to learn to recognize it. So, she gave me a bit of schooling on each stage. It goes like this:

Advertisement
MORE FROM SOLA
All Articles

Stage 2: The Plateau Phase
Your skin may become blotchy or red from the increased blood flow during arousal. Your genitals, legs and stomach may experience feelings of tension or heaviness. Ducky says this stage can be uncomfortable for people, particularly if it doesn’t graduate to a release, or orgasm. Good to know.

Stage 3: The Orgasmic Phase
This is the one everyone’s gunning for, right? The thing is, Ducky says that it can feel different every time, so it’s best not to set expectations about how it’s going to go. Instead, I should just let go and enjoy the experience.

Because one of the big goals for me is to learn to have more powerful orgasms, the first step is to strengthen my orgasmic muscles in the pelvic floor. The stronger the muscles, the stronger the orgasm.

So, I've been dutifully doing my Kegel exercises to get those babies in shape. Ducky also gave me a few tips on how to push myself over the edge when I'm getting closer to orgasm, including:

Locking Myself In a Room With the Sola Sync

Did I mention that this thing is powerful? The first time I used it I just laid in bed and put it near my clitoris.Then, I fiddled around with a few different vibration settings. Suddenly, I found THE ONE. It literally made my eyes start tearing up. With tears pouring from my eyes, I reached a climax surprisingly quickly. It also lasted slightly longer than expected considering how quickly it came along!

But when I do something, I take it seriously. So, I used this toy more than once. Actually, I used it a lot. More than I’m going to admit to here. (Let's just say that although it has a very long-lasting battery, I managed to drain it in fairly short order.) Anyway, in subsequent attempts with the Sola Sync, I did something Ducky recommended specifically for this toy: going “face down” on it. That’s another thing I had never even heard of or considered. So, I gave it a try. All I can say is that it's a good thing I have a sex educator to give me advice like this. I achieved three orgasms in one session. For someone who had previously never had an orgasm in her life, that is big news. I had to change my sheets! I’m typically someone who requires lubricant for sex, but this has me thinking I had better bring this toy in on future action with my partner as well.

All I can say is that it's a good thing I have a sex educator to give me advice like this. I achieved three orgasms in one session.

I also make sure this toy is charged at all times. When it went dead mid-session and I had to finish the job with something else, I was sorely disappointed.

I'm not a nymphomaniac yet, but I have gone from never having orgasmed in my life to getting the job done in three minutes flat. I also own a couple of sex toys and bring up sex with my husband more often. Ducky likes to use the word "badass" to describe my progress. And you know what? Maybe I am. She sure has been right about a lot of other things!

MORE FROM SOLA
All Articles

Jane Doe
Jane Doe is the woman next door, the career woman, the stay-at-home mom, the single gal. She's just your average woman giving an average woman's opinion on a range of sex toys. She prefers to keep her kinky fun anonymous, but she could be any woman you know ... maybe she is.
Full Bio
In The Kinkly Shop
Visit The Kinkly Shop