by TARA STRUYK
Published: MARCH 10, 2021 | Updated: APRIL 22, 2021 04:51:41
Thousands of women suffer from chronic vulva pain, yet no one is talking about it. Suzanne Sinatra started her femtech company to help change that.

Suzanne Sinatra’s business idea arrived like so many of the best business ideas - from personal experience. In her case, that experience was an unfortunate one: a Brazilian bikini wax that went horribly wrong.

“A Brazillian wax ripped off all my hair and all my skin,” Sinatra said. “I was in pain, but it was like my vagina said, ‘don’t you put those peas on me.’”

But when she Googled “vagina ice pack,” she found nothing. After talking to a few friends who’d also experienced vulvar pain, the idea for Private Packs, heatable or coolable therapy packs for the vulva, was born.

“Private packs are like an insurance policy for your vagina. You don’t know when you’ll need it, but it’s there,” Sinatra said. 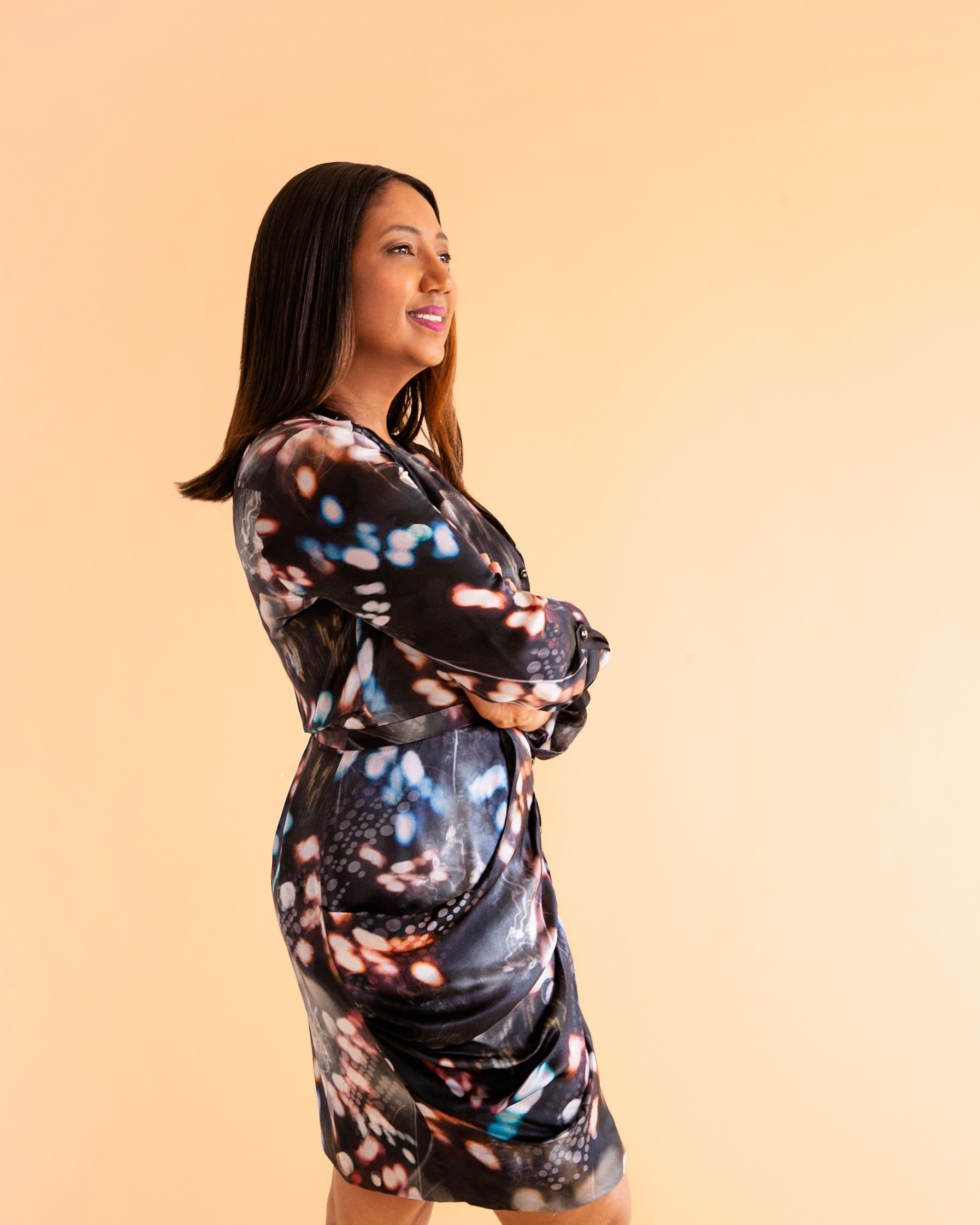 As it turns out, a lot of vulva owners might need that insurance policy at some point in their lives. According to statistics, at least 200,000 American women suffer from chronic vulva pain and that number doesn’t even take into account other, more temporary reasons things can get sore down there: rough sex, giving birth, STIs, yeast infections, menopause and, yes, a poorly executed wax job, among many others.

On any given day, there are a whole lot of sore vulvas out there, so it’s no wonder that Private Packs seems to be resonating with consumers. After executing a successful Indiegogo campaign in 2019, the product is now for sale online and getting rave reviews from users and sexual health professionals.

Now Sinatra, a former Wall Street marketing and events executive, works as the company’s founder and CEO. But between the inspiration and the company’s launch, Sinatra got one last push that would help her appreciate the value of her product that much more deeply: a battle with cancer.

Private Packs was initially scheduled to launch in 2017, but two weeks before her crowdfunding campaign was scheduled to begin, Sinatra was diagnosed with breast cancer. The launch was postponed, but Sinatra worked away at her idea through her treatment. (She is now healthy.) She also got another lesson in just how much need there might be out there for her product.

“Chemo launched me into menopause and I had excruciating vaginal dryness. I knew I couldn’t be the only one in pain and no one’s talking about it,” Sinatra said. 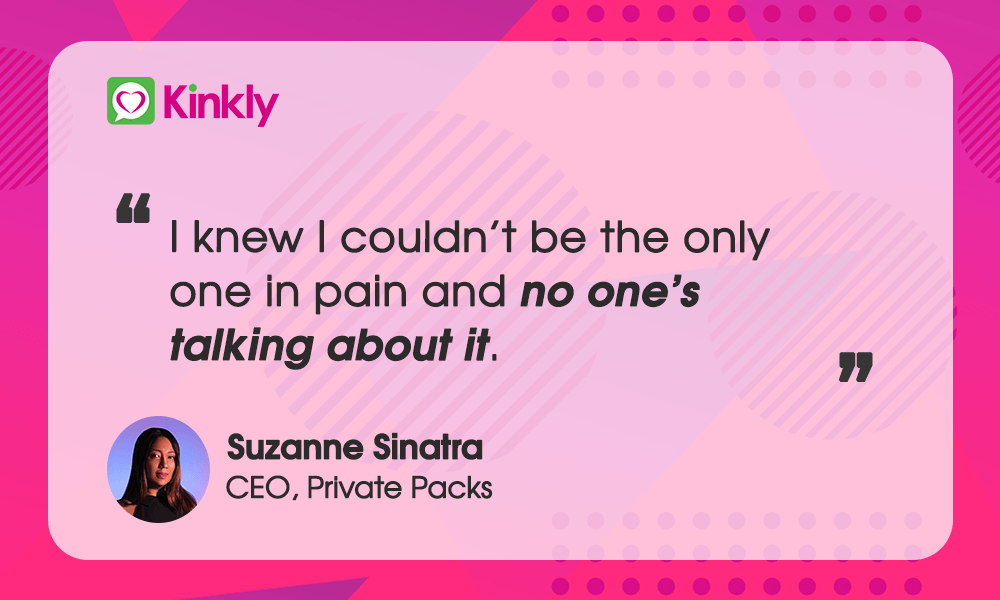 While Sinatra has been embraced in the femtech space, her company sits in a bit of a gray area in terms of “tech.” It isn’t a device, it isn’t “smart.” It’s just a well-made, thoughtfully designed hot and cold pack for your privates. 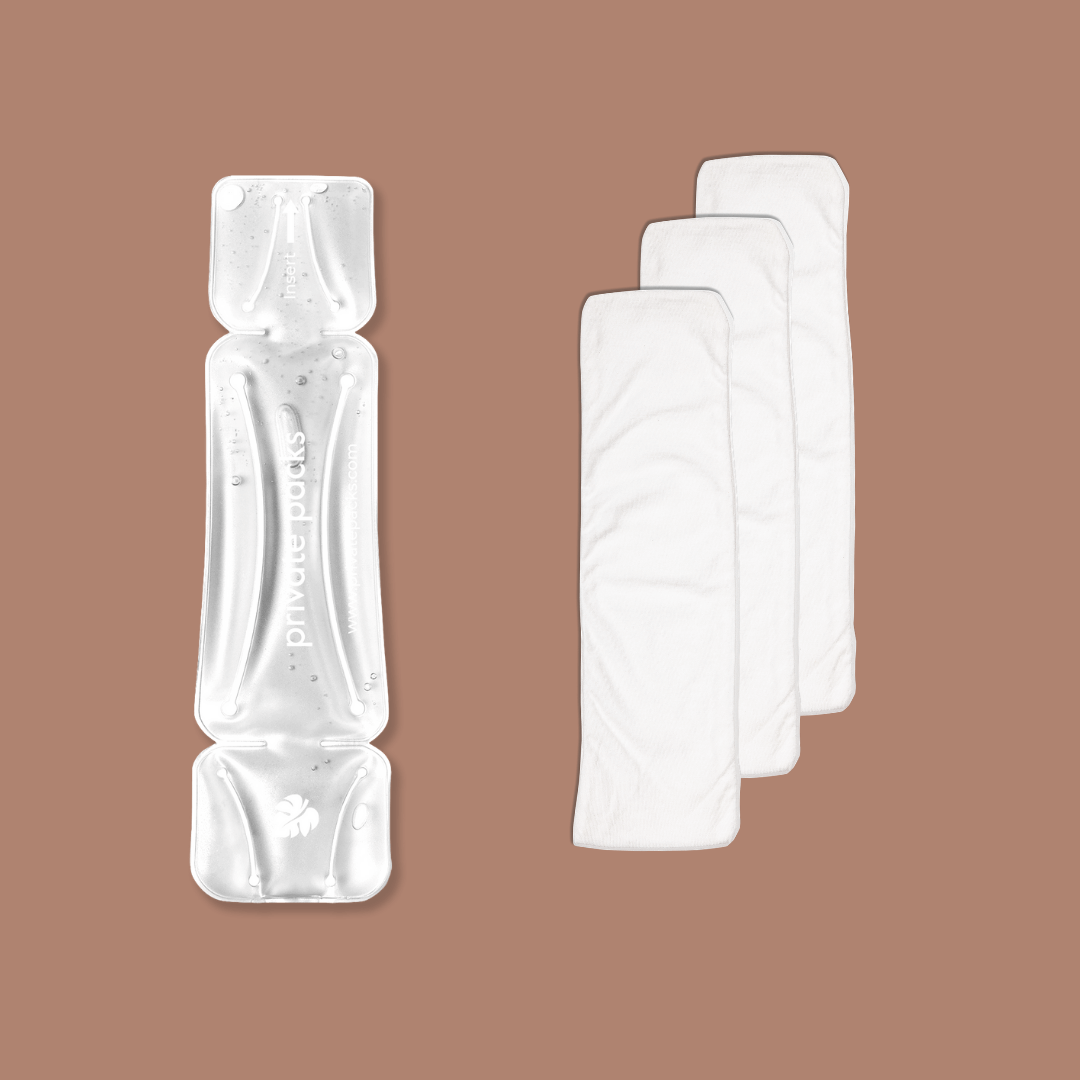 But Suzanne concedes the simplicity is part of what the brand’s all about - and one of its strengths.

“I had one investors say ‘would you want to add a Bluetooth feature to the pack?’ Not everything needs to be connected,” Sinatra said. “I could just put an ice pack on my vagina and it would be OK. The point of the brand is to disconnect.”

Sinatra refers to the femtech and sextech communities as “a badass group of secret superstars.”

“I didn’t know about femtech at all until 2018 after I had become part of the sextech community,” Sinatra said. “I was, like, ‘what the fuck is this?’ It made me feel good because I didn’t feel so alone in this. 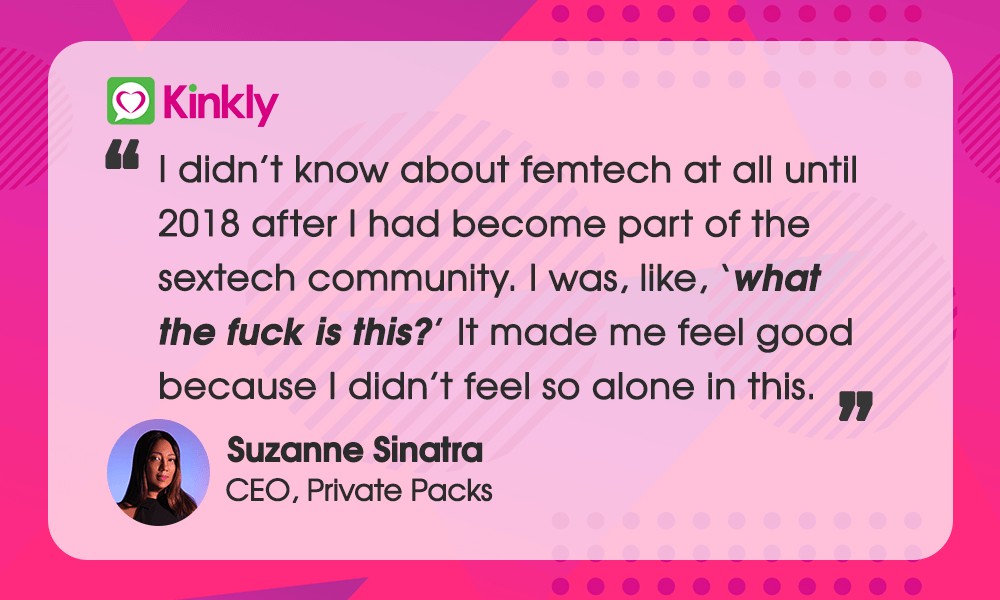 Sinatra’s connected with the significant and growing community of femtech entrepreneurs in New York City, where she lives, including leaders like Bryony Cole, Polly Rodriguez and Lidia Bonilla.

“I think we’re the most badass women in New York and no one knows it,” Sinatra said. “We enhance people’s sex lives and educate them about their sex lives and we do it behind the scenes.”

Now that Private Packs are available to the public, Sinatra is working on the next phase of her business, which includes a few new products: a herb-infused adhesive heating patch for period pain, and breast packs to help alleviate breast pain from breastfeeding, injury, menopause or cancer. Sinatra also hopes to expand to wholesalers and be stocked in physical therapy offices, by gynaecologists and in novelty shops.

“We want to be where every vulva owner will be,” Sinatra said.

And while Sinatra believes that investors are starting to take women’s health more seriously, she still sees lots of room for innovation in the space.

“The conversation around taboo topics is opening up more,” Sinatra said. “Even so, most companies in the space are around menstrual health and menstrual care, stuff like that. We still have a ways to go in terms of the innovation in the space around women’s health. We could do more.”

We still have a ways to go in terms of the innovation in the space around women’s health. We could do more.

She also believes that despite the fact that femtech - as an investment opportunity - has only recently begun to be accepted by the investment community, it might be needing a new name soon.

Like many of the best business ideas, Sinatra’s product started with her ability to spot a real need in the market. And, it’s through connecting with customers and helping people that she’s gotten the most satisfaction.

“I had no idea how much women were going through,” Sinatra said. “There are hot and cold packs for your back … what would make you think [vulvas] didn’t need care? I have yet to see a person birth a baby out of their back. Let’s talk about what really happens down there.” 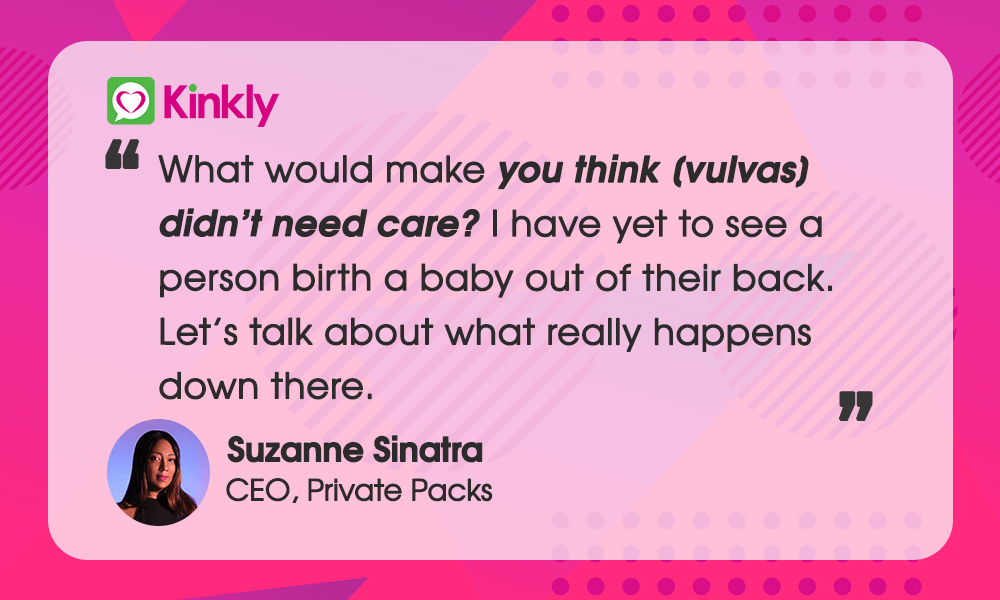