by TARA STRUYK
Published: MARCH 23, 2021 | Updated: MAY 2, 2021 07:14:20
This CEO and co-founder of Handi is working to make self-pleasure more accessible to people with physical disabilities.

Siblings don’t often talk about their sex lives. But when a documentary about sex and disability gave Heather Morrison a window into her brother’s sex life as a disabled person, it also opened her eyes to a problem; for many people with physical disabilities, self-pleasure just isn’t accessible.

“Watching that, for me, was a real eye-opener,” Morrison said, one that opened up a real conversation between her and her brother.

"So, I said, very naively, why can’t you just use a sex toy? There are hundreds of those ... surely one of them would work?”

Morrison’s brother is Andrew Gurza, a disability awareness consultant, podcaster and the star of “Picture This,” a 2017 documentary where he discusses his experiences with sex and disability, and his work to bring those experiences to light.

Read: Why Sexual Function Should Be Part of Occupational and Physical Therapies for Disabled People

Gurza was quick to set his sister straight. He told her he’d been working in sexual health for more than a decade and, as a result, had been the recipient of many sex toys.

“He told me he couldn’t get many of them out of their packages - and most didn’t really work for him at all,” Morrison said.

It was a light bulb moment, one that activated Morrison’s skill set as a brand and innovation strategist.

“So I said to him, ‘Do you want to change that?’ Do you think we could make a toy that would be something you could use?” 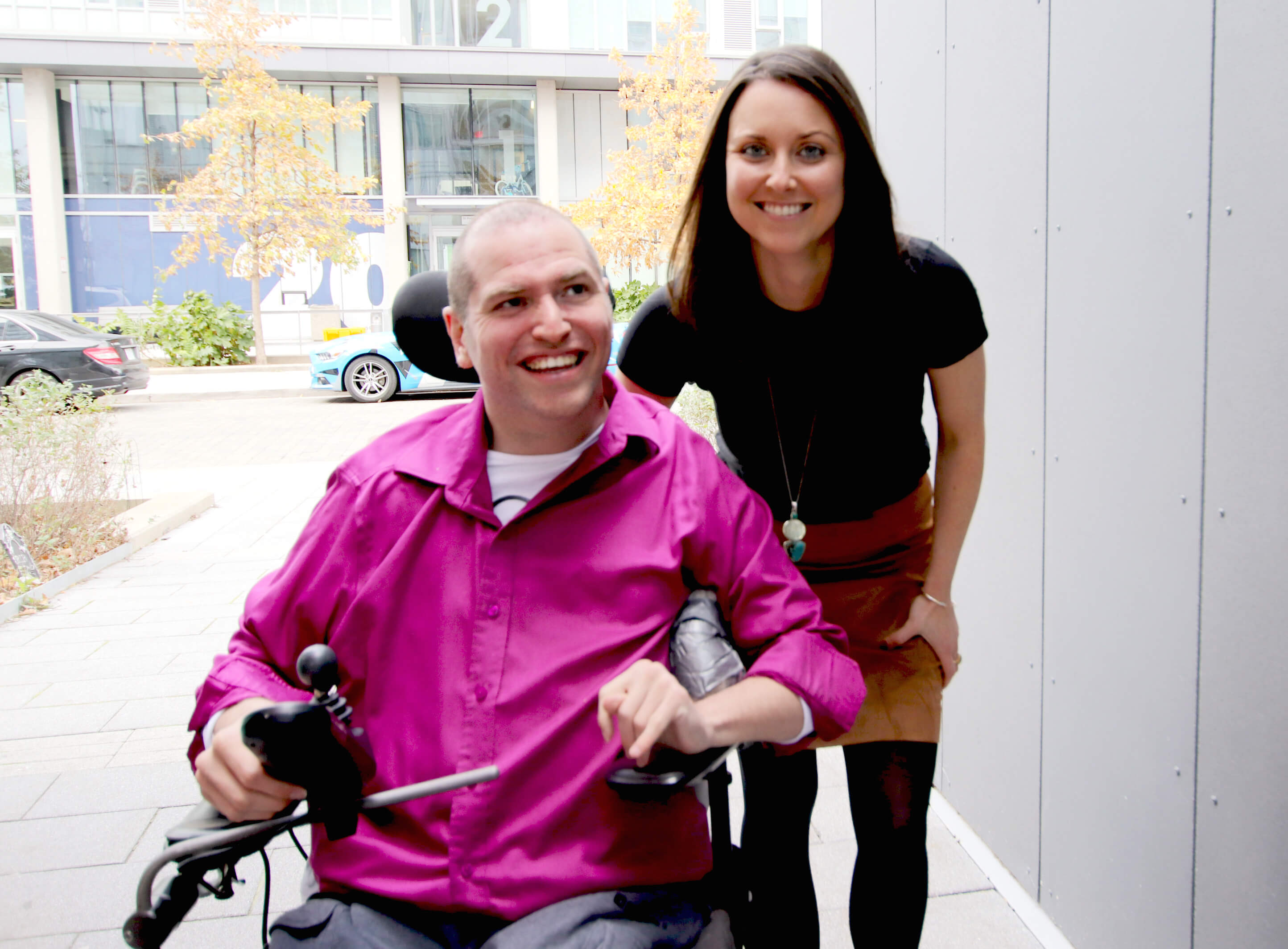 Andrew Gurza and Heather Morrison, co-founders of Handi.
Source: Handi
The conversation led the siblings to co-found Handi, a company and brand devoted to designing sex toys for people with physical disabilities; Morrison serves as the CEO. The company is working on making the first line of sex toys that doesn't require the use of one's hands to operate them.

“What we’ve found in talking to so many people in the community is that from a societal and systemic standpoint, disabled people are often assumed to be not sexual or asexual,” Morrison said. 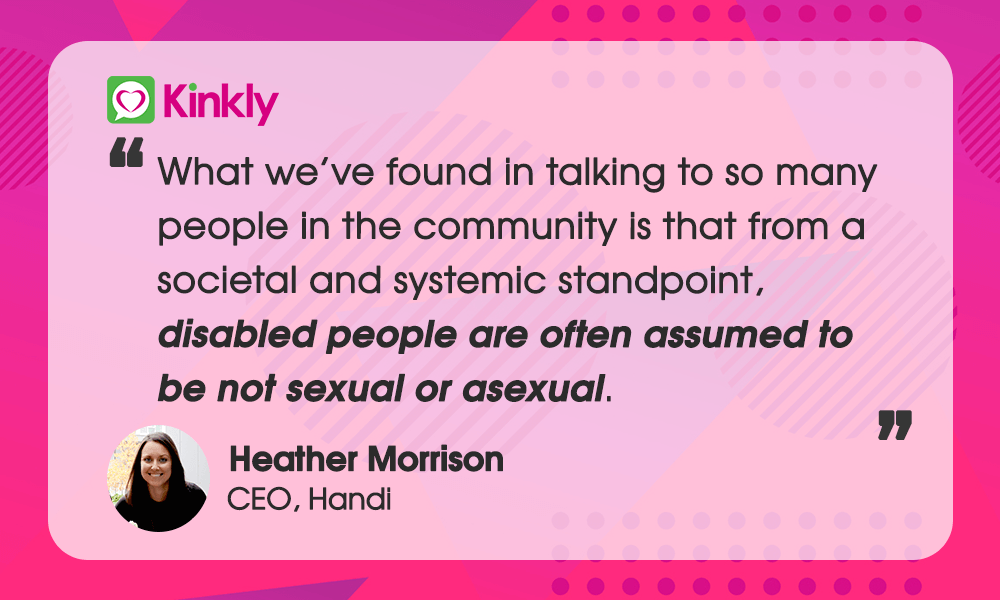 What Morrision and Gurza knew - and the data they gathered confirmed - was that this is not the case. A survey by the company found that more than 50 percent of physically disabled people struggle to achieve sexual pleasure, even though most of them (90 percent) said they wanted to. As a result, Handi came to be about more than just making a sex toy - it also needed to be about changing people’s minds about disability and sexuality.

More than 50 percent of physically disabled people struggle to achieve sexual pleasure, even though most of them (90 percent) said they wanted to.

“If, from the age of puberty, you’re being told … you shouldn’t be sexual, that breeds feelings of isolation and shame,” Morrison said. “We have three strategic pillars at Handi: tearing down taboos, product, and education and sex ed.”

And while companies working in sexual health always face more hurdles than those in less taboo fields, working in sex and disability can unfortunately mean an additional layer of challenges. 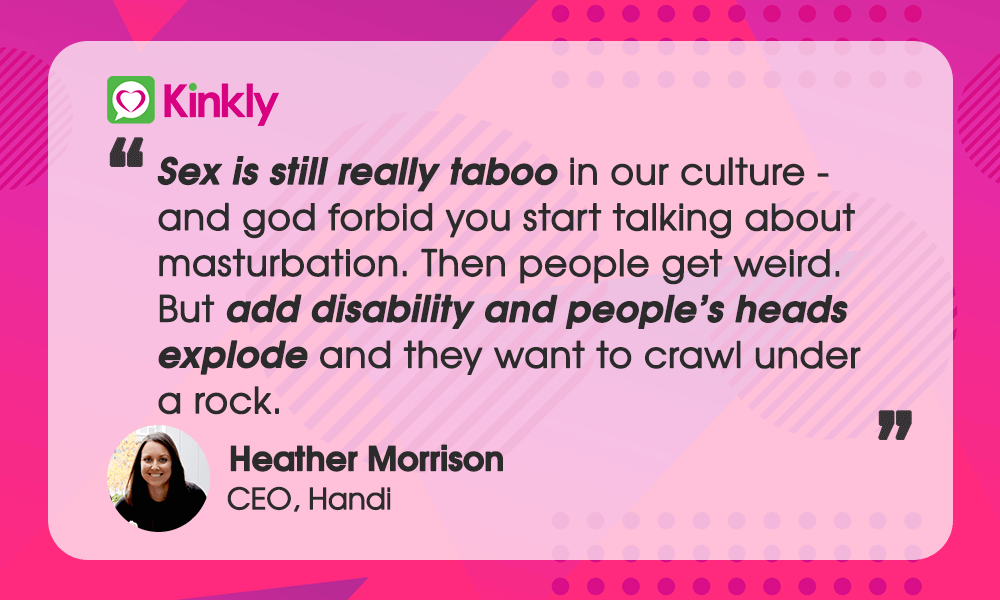 Despite the challenges, Handi has been making notable headway and gaining momentum. The company was accepted into the 2020 cohort of the Remarkable Tech Accelerator program, hosted in Sydney, Australia, where they got the opportunity to work with other start-ups in the disability space as well as access to funding.

In December, Handi partnered with mega sex toy retailer Lovehoney to help distribute The Handi Book of Love, Lust & Disability, a book filled with stories, poems and art about disabled sex from 50 disabled contributors. Lovehoney will also help with the manufacturing and distribution of the company’s first sex toy, the Handi Joystick, which is expected to be available for pre-sale in May.

But while Morrison and Gurza were quick to land on a market and mission for their business, developing that first prototype was much harder than they expected.

“I had never heard the term ‘hardware is hard,’ but bringing a physical product into the world is very hard,” Morrison said. “But we decided we are going to do it and we haven’t looked back.”

And, while it addresses some of the key pain points for people with disabilities, it's easy to see people without disabilities enjoying it too. The toy is designed for pleasure and ease of use. In this, Handi’s keen attention to detail is enviable; every detail of the product - from the packaging all the way to how it’s cleaned and cared for - has been considered.

The fact that Handi is going to such great lengths to design something just for a group of people whose sexual pleasure often hasn’t been even considered is a testament to their commitment to and engagement in these communities. 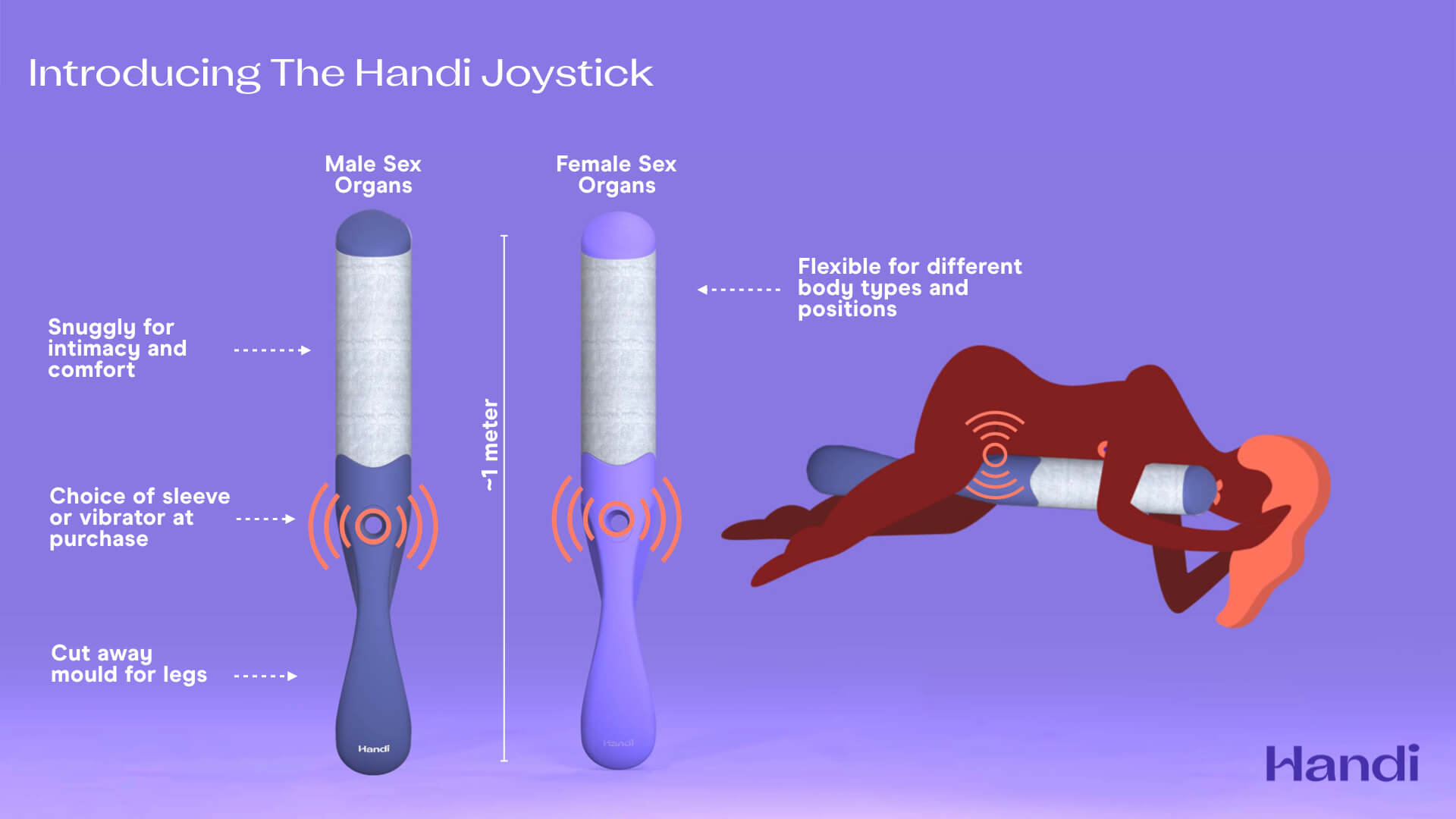 The Handi Joystick is a sex toy for people with limited use of their hands.
Source: Handi

“We started out wanting to create a product, but we just had no idea how much there is to do in this space, or how much opportunity there is. The more you talk to people, the more you realize there are so many areas that need attention or connection,” Morrison said. “Sometimes at a meeting, the product ends up at the bottom of the list because we are talking about taboos and education.”

So far, the company has found its greatest success in “leaning into taboo,” as Morrision calls it. By harnessing the power of influencers and people in the disabled community, Handi is building momentum, recognition and what could be a life-changing product that actually puts disabled people’s pleasure first.

Morrison says that it’s only when we call attention to the things we don’t talk about - like sex, and self-pleasure, and how those experiences are impacted by disability - that we start to solve these sorts of problems.

“It’s about opening the conversation,” Morrison said. “If the best design minds don’t know a problem exists, they aren’t thinking about how to solve [it].”