by TARA STRUYK
Published: MARCH 18, 2021 | Updated: APRIL 22, 2021 04:56:10
This femtech founder is on a mission to not only solve a problem that has been considered unspeakable, but also remove the awkwardness around talking about it.

Like many founders, Frances Tang has had lots of other jobs over the years. But it was her job in a bakery that led to her light bulb moment.

“Every time I used a rubber spatula, I was like, ‘I wish I had a spatula for my vagina,” Tang said. “Every time I would look it up on the internet to find a solution, people would say they used a sex towel. But this is an internal problem - it’s on the inside.” 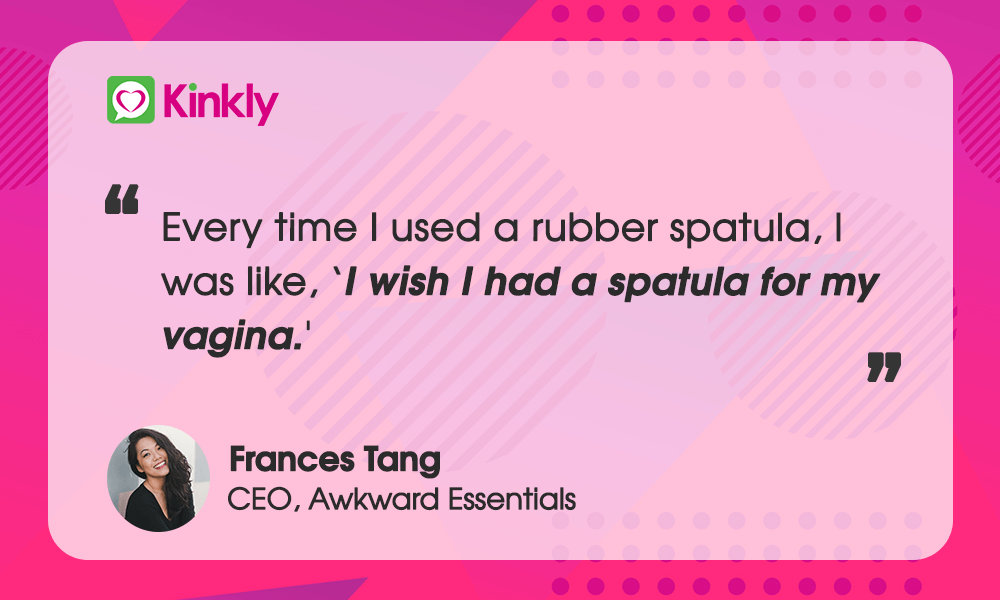 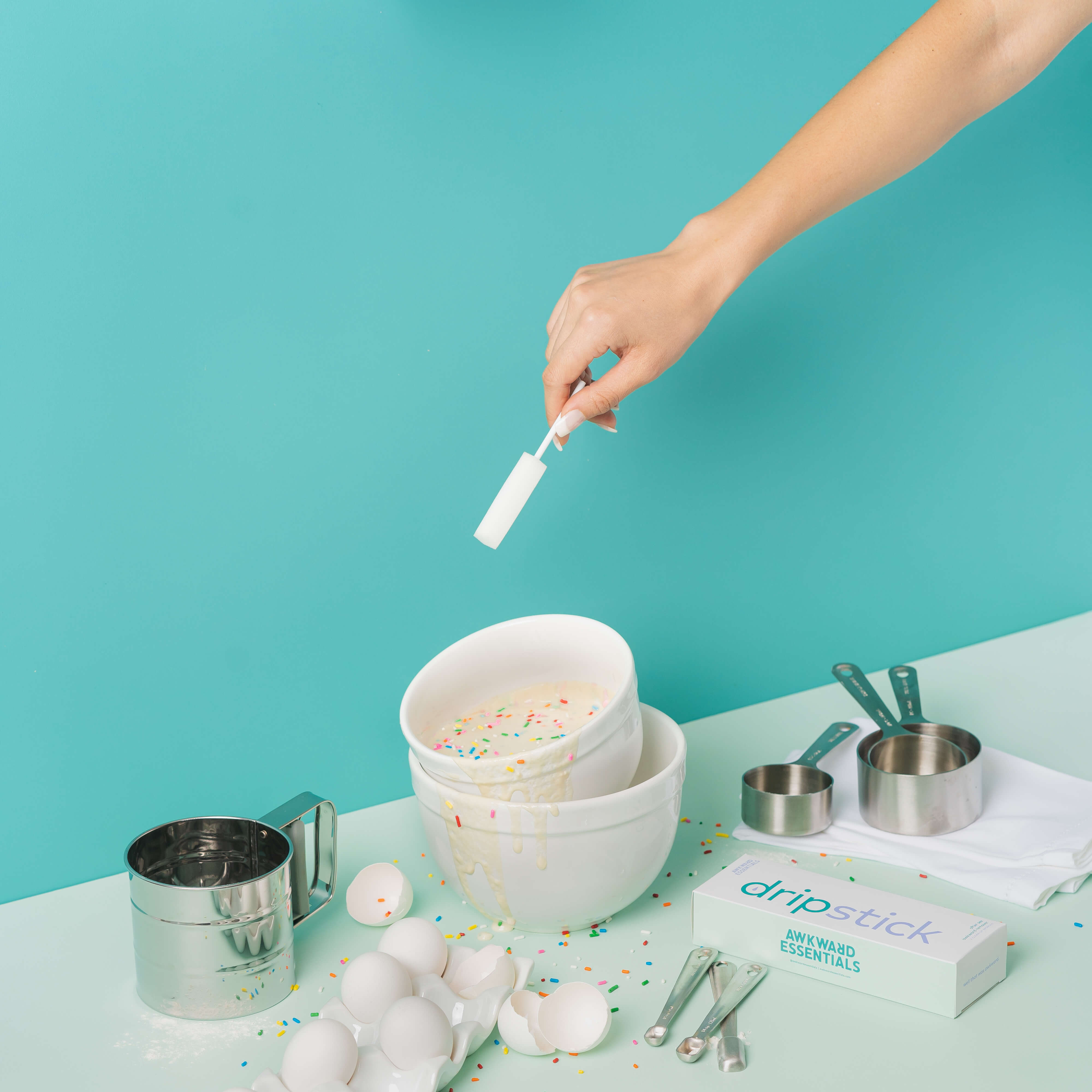 The problem Tang is referring to goes into a territory of awkwardness most people aren’t comfortable addressing. It’s why, in the movies, people with vaginas have penetrative sex without a condom and then just slide right back into their jeans, sans underwear.

If you have a vagina, you know where I’m going with this. Like, how does that even work?

Tang is the founder, CEO and self-dubbed “Captain Awkward” at Awkward Essentials, which makes a product called dripstick, an insertable, medical-grade sponge designed to quickly soak up post-sex fluids. 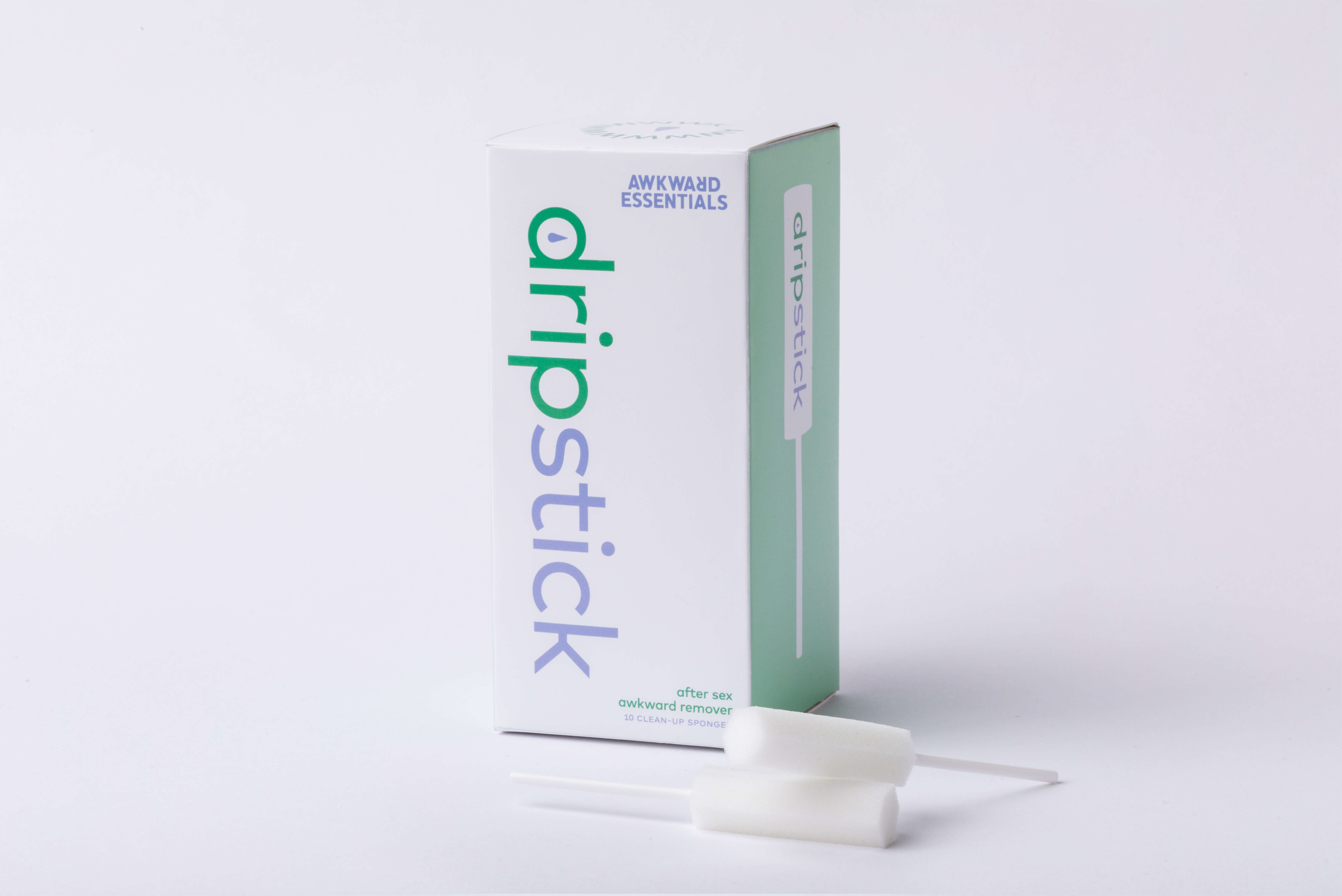 “I just don’t like rolling off the bed and going to the bathroom and just feeling like I’m wiping and wiping and it’s still just, like, coming out,” Tang said. “I just think I’m kind of a lazy person.”

When it comes to the product - and the problem it solves - Tang is very blunt. That’s part of the product’s appeal, but it was also part of her learning curve as an entrepreneur in the femtech space.

After coming up with an idea and getting some positive reinforcement from friends, Tang took her idea to a startup accelerator and then started pitching the product.

“The first time I pitched the product to my cohort, it was awful,” Tang said. “People were horrified! I learned that the best way to talk about [the problem] was in relationship to myself. That was where our brand started and gained its voice. From there, it was off to the races.”

But not until Tang had taken another big risk - she ordered 20,000 prototypes of her product (the minimum!) so people could actually understand her vision. Then, she set up a Shopify store, listed the product and posted it on a couple of Facebook groups for feedback.

Within days she’d received a flurry of mainstream press coverage and sold thousands of sponges. Clearly, she was onto something.

Tang describes the Awkward Essentials brand as “my personality put on the internet.” The brand is quirky, honest and lighthearted. As a result, it succeeds at making a problem that seems impossibly awkward seem like something that happens to everyone. Which, of course, it probably does.

In the femtech space, where Awkward Essentials and Tang are well-recognized, fixing real problems that have tended to be deemed not worth mentioning or deserving of a solution is the name of the game. And, when you consider that even serious problems that affect women’s very lives tend to be understudied and underserved, it’s no wonder it’s taken so long to get the awkward stuff.

Tang started connecting with other femtech founders early on and got involved with Women of Sex Tech, an organization that aims to champion female founders innovating in the sexual wellness and pleasure space.

“I started connecting with other femtech founders because our problems are very similar,” Tang said. “It’s really interesting seeing the business through that lens because the problems that women go through, only women can solve.” 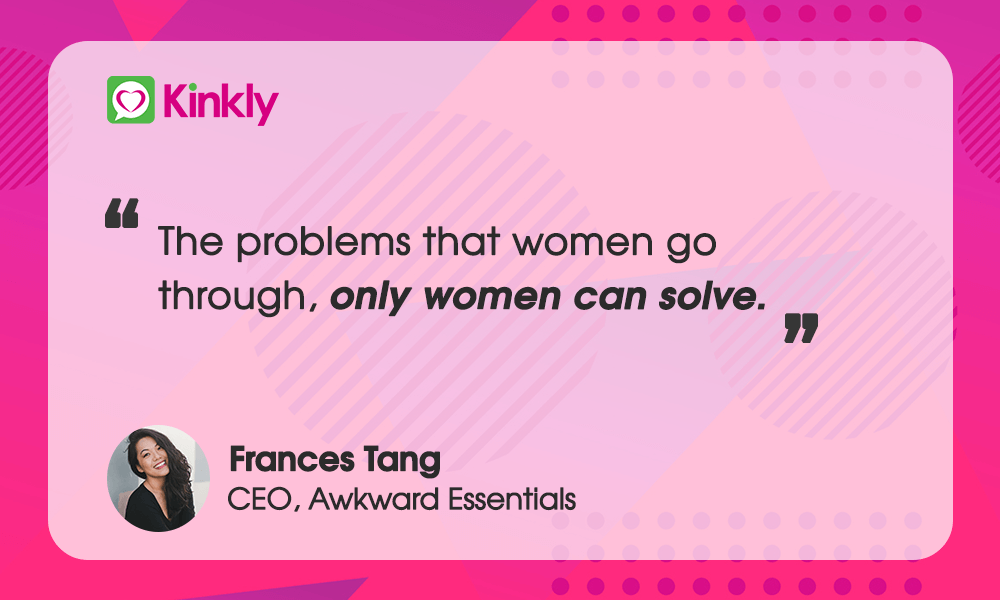 Tang’s goal is to normalize dripstick to the point that it’s no longer awkward at all.

“My goal is to get it as normalized as the tampon,” Tang said. “Like, I can’t imagine what people said when the tampon came out. I just want to make [dripstick] a thing like, you have a napkin for lunch, and a tampon during your period and dripstick for after sex.”

Although Tang says the company has been lucky with funding (in 2020, it secured $800,000 in funding from Unorthodox Ventures), Tang concedes that getting buy-in still isn’t always easy, whether it’s from investors or when trying to get the word out about her product.

“Not only is it sex related, but it’s this weird, sticky, gooey thing that a lot of people won’t talk about,” Tang said.

But while male investors might be confused about the product’s usefulness (a few have asked Tang why a tampon wouldn’t work just as well), the product’s users have no qualms when it comes to what dripstick brings to the table.

“What I hear so often from women that order the product is ‘oh, I just thought this is something I had to deal with.’ I think that trope is just how women have been conditioned - to, like, deal with it,” Tang said. “It’s very bittersweet but I think with the emerging sector of femtech, people are seeing that there are solutions to these things. There’s been this overwhelming belief that we have to take it but it’s shifting.” 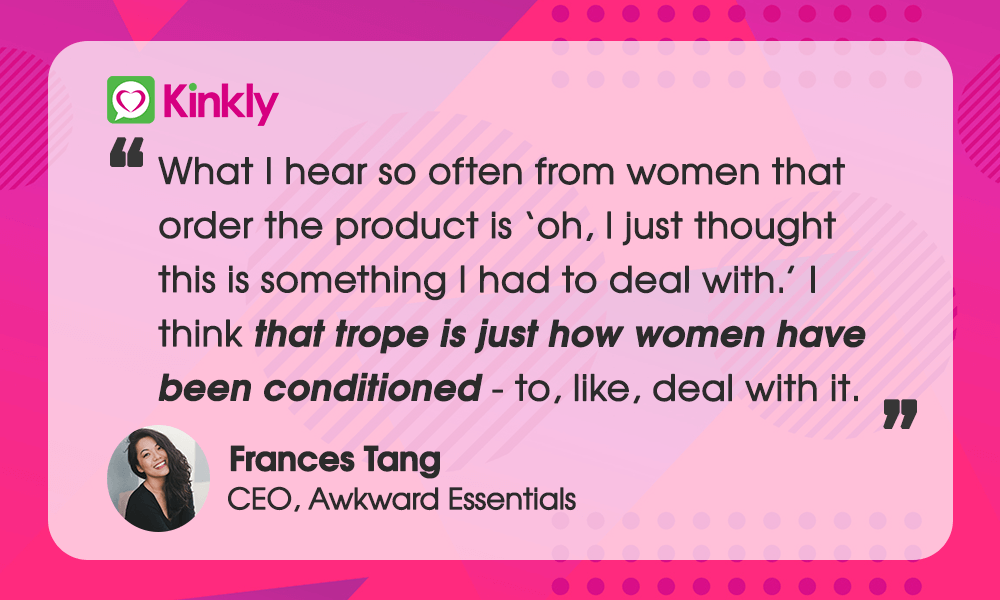 As for what’s up next for Awkward Essentials, Tang is just focused on getting driptick to more people. If they can experience it, Tang feels certain they’ll “get it.” As “Captain Awkward,” Tang also sees her role in continuing to help drive conversations about previously unspoken (and often unspeakable) topics.

“There’s room in the market for women’s companies that are straightforward about what’s happening. We can be and do whatever we want,” Tang said. “Seeing the idea come to life and people respond to it so positively is the most rewarding part.”