Erotica: No Way I'd Rather Have It

Logan’s hands wandered over Casey’s body as their lips touched. She couldn’t help but delve her tongue in and explore his lips and tongue. His hands cupped her modest breasts, admiring how they felt in his hands, before trailing his hands down her sides and settling on her hips. She began to kiss his neck, and it felt like a flashpoint to Logan. There was no going back from this point.

“You want this?” he asked grabbing her hand and letting it hover over the outline of his obviously hard cock. “You see how hard you’re making me?”

“Mmm,” Casey moaned, her hand cupping his hard cock through his jeans. “I think it’s time for you to take off those jeans.”

He stood and quickly undid his belt, the metallic clink of it giving Casey goosebumps from the sheer anticipation of what was to come. She took the opportunity to shed her sundress, leaving her just in a bra and panties.

From her place on the couch, Casey looked up at Logan’s tall form. He stood at about 6’1”, dwarfing her petite height of 5’3”. When Logan saw her looking up at him with a heavy dose of arousal in her eyes, he quickly shed his shirt and reached out to ruffle her blonde, wavy hair.

“Come here, baby girl,” he said, settling back on the couch wearing just his boxers. He quickly used both hands to grab Casey around the waist and pull her into his lap. She straddled him and ground her hips into his hard cock, just the fabric of their underwear keeping him from slipping inside her.

“Slow down…” Logan trailed off, unable to resist the way his girlfriend felt when she rubbed her pussy against his erection. She leaned forward, over him; her hair tickled his face as she moved in to nibble on his neck.

Logan’s large hands slid up and down her back, pausing to unfasten the bra she wore. She loosened her arms to take it off and he happily tossed it in the direction of the bedroom, eliciting a giggle from both of them. Casey’s laugh was quickly replaced by a moan as Logan’s hands cupped her breasts, his palms brushing against her nipples.

“How about this?” he asked, pinching both of her nipples between his forefingers and thumbs and twisting. At first, he was gentle, but as she adjusted to the sensation, he twisted a little harder. She thrust her hips against his hard-on once more and was able to perfectly align herself so that his throbbing cock brushed against her clit. She let out a little, urgent, high-pitched moan.

“I’m not fucking you on the couch,” he growled. “So you better get yourself fully naked and into my bed, baby girl.”

She nodded, dismounting him and standing. Slowly, she shed her thong in front of him, as he watched with a smile on his face when she fully bent over, giving him quite a perfect view of her pussy and ass. Casey glanced over her shoulder revealed the most satisfying look on his face. She and Logan hadn’t been dating for very long so she liked still being able to do things that surprised him.

She stood, fully naked, letting him take in her petite, curvy body for a minute. “Damn, baby. I could look at your body all day.”

She blushed, then reached out for his hand. “Come on.”

They made the short walk to his bedroom hand-in-hand.

“Lay down on your back,” he instructed. “With a pillow under your hips.”

She did as he said, and waited for him to decide what he was going to do with her first. He got on the bed on his stomach, using his hands to bend her knees and spread her legs. Logan wasted no time, he quickly hooked his arms around her thighs and dove into her center with his mouth.

“Oh my God, Logan,” she groaned shakily, as his tongue traced the area around her clit. She reached down, burying her fingers in his curly, auburn hair. His pace steadied, but he continued to steadily prod and circle her clit. “Oh my God.”

He came up for air, but not before blowing cool air on her most sensitive areas and replacing his tongue with his thumb. “Does that feel okay?”

“Are you kidding?” she asked, before taking a heaving breath. “It feels amazing.”

“Noooo,” she sighed, shaking her head. “It’s what I’ve been dreaming about all day.”

Satisfied with that answer, he returned his mouth to her pussy. The fingers that had been gently circling her clit trailed down. He inserted one finger then another, rhythmically moving them in and out of her in time with more direct swipes of his tongue over her clit. His manuever left Casey a shaking, moaning, blissful mess.

Erotica
Erotica: The Pop Up
by F. LEONORA SOLOMON

“That means I’m doing it right, then,” he murmured. He doubled down on maintaining the same rhythm, his fingers entering her and brushing against her g-spot in time with his tongue prodding at her clit. Her legs tensed up around him and he looked up just in time to see her orgasm starting to peak. A blush settled across her cheeks as she threw her head back.

Her legs trembled, and her little noises of satisfaction became one large, low moan, loud enough that the neighbors could probably hear, not that either of them cared in that moment. Logan watched Casey’s twitching, tense body with pride until she stilled and rolled to the side.

“You ready for more or do you need a minute, baby?” he asked, gently rubbing her shoulder.

“More,” she murmured, her blue eyes locking with his brown ones, a relaxed smile plastered across her face. Logan took this as permission to roll her from her side onto her back. She was plenty wet, and he rubbed his cock up and down her slit, making sure his thick cock would slide right into her. “Oh, Logan, please.”

He slowly pushed into her, as her body stretched to accommodate him. She let out a high-pitched moan as her body grew accustomed to having his large, thick cock inside her. While he waited for her to encourage him to fuck her, he bent her legs and she instinctively started to hold her legs up for him, allowing him to bottom out in her.

He started to slowly thrust into her, which was intense as she raised her hips to meet his thrusts. Logan was balls deep in Casey, and they were both content about this. Casey hooked her ankles together around Logan’s back as he pounded away at her.

“Do I feel okay?” she asked, a wrinkle of concern appearing between her eyebrows.

“You have the best damn pussy,” he assured her, leaning down to kiss her worries away without even breaking his pace. For a few moments, his only focus was thrusting in and out of her. He enjoyed the noises it was eliciting out of her and how tight she was around his cock. “I’m not going to last long.”

“Really?” he asked because it was the first time she had asked him to do that. She nodded encouragingly, a smile across her cute face. Encouraged by this, he thrust into her a few more times before he let out a loud moan and began emptying himself into her.

He leaned down and kissed her deeply, while she played with his hair gently, so as not to overstimulate him. For a moment, he laid on Casey, resting part of his body weight on her, just enjoying the after-effects of his orgasm.

“What do you think?” Casey asked him, curious if her request had excited him the same way getting creampied excited her.

“I think you’re mine now,” he said, trailing kisses all over her neck and face. “I like making a mess out of you.”

Erotica
Erotica: The Pop Up
by F. LEONORA SOLOMON 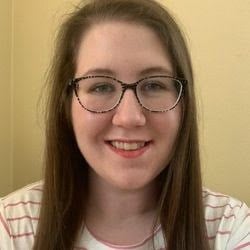 Emily Courter is a freelance writer who specializes in writing service journalism about women’s health and wellbeing, with a particular interest in sexuality. This is her first time publishing erotica.

Her writing has appeared on many sites, including Refinery29, Insider, Giddy, Diem, Volteface, and more. For more information, check out her website, emilycourter.com.

She lives in New England with her two rescue cats. She loves the great indoors, cold brew coffee, and traveling. You can find her on Twitter or IG at @emilyherself."