Doctors Could Do Better, Especially for Sex Workers

by JESSIE SAGE AND ISABELLA COWAN
Published: DECEMBER 14, 2021
"Listen to sex workers" applies to doctors and the healthcare system as much as anyone. Here is what those in the know had to say.

People of color, poor, queer, trans, fat, disabled, and otherwise marginalized folks frequently struggle to adequately access healthcare. This is also true for sex workers, who are disproportionately from these marginalized backgrounds.

When accessing health care, sex workers also have to grapple with the stigma around disclosing their job status, with the very real possibility that they may be discriminated against or harassed because of it. The barriers sex workers face in accessing adequate and appropriate health care shines a light on the shortcomings of our health system at large.

Ember Fiéra, an Asian trans sex worker, believes that doctors have too much power in deciding who deserves their care. “[Doctors] get to judge us—whether we are worthy of receiving this treatment or that treatment.” This power to refuse care to those who fall outside of their interest has often meant that sex workers have had to turn to each other for the care that they aren’t getting from doctors. “It’s ridiculous that we’re providing medical care—advice—to each other,” she says.

“[Doctors] get to judge us—whether we are worthy of receiving this treatment or that treatment.”

Former escort and freelance writer/photographer Adrie Rose agrees. “I mean, [discrimination against sex workers is] pretty prevalent, but it grates a little bit more when it’s coming from a medical professional—someone who’s supposed to be objective.”

Director of Reproductive and Infectious Disease at Allegheny Health Network, Dr. Yasaswi Kislovskiy, began to understand this reality when, as part of her fellowship research, she interviewed people who exchange sex. “I think it's really important to convey how much they immediately knew that the system was not for them,” she says of her interviewees. “From the person who checks [them] in at registration [to] the phone call it takes to make [their] appointment.”

Read: The Erasure of Sex Work From the Common Internet

Most sex workers quickly recognize stigma when they see it coming from their health care providers. For this reason, many are reluctant to disclose their jobs, even when it is relevant to their care. “Because sex work is criminalized, because it's so stigmatized, I don’t think it's really good for a lot of patients to disclose,” Fiéra comments.

While Bryan Knight has to negotiate healthcare based on his status as a gay sex worker, he recognizes that as a white cis-man, his interactions with doctors have been easier. Unlike some of the other sex workers we interviewed, doctors don't scold him for engaging in the sex trades. “There’s definitely a race and gender presenting factor in who gets the talk versus who doesn’t get the talk,” he says.

"When you add in things like being Black, being overweight or obese, being a sex worker, people just take you a lot less seriously.”

Rose agrees that the problem is compounded by race, commenting, “As a Black woman, it’s really hard to get competent healthcare, and with being a sex worker, I think it would only be worse.” And Rose has been taken less seriously. She reports, “When you add in things like being Black, being overweight or obese, being a sex worker, people just take you a lot less seriously.”

When seeking hormone treatment, Fiéra was told by the front desk staff that her doctor was “not accepting those kinds of patients anymore.”

The criminalization of some forms of sex work only makes the problem worse. Sex worker Ava Adore comments, “[Sex workers] are not gonna say why something is happening when it’s related to a job that is illegal.” She continues, “You’re gonna be less honest with your doctor, which is going to affect your care significantly.”

The consequences of criminalization are far-reaching. “I think that a huge part of the issue with receiving healthcare and getting criminalized people to seek out medical assistance when it's necessary is that they can’t trust that the information is going to stay where it’s supposed to,” Rose says. “Not to doubt their integrity, but I can’t take that chance,” she explains. As a child of immigrant parents, she didn't feel like she could trust that information about her job wouldn’t put her or her parents at risk of deportation.

Adore, who suffers from chronic pain, added that information about criminalized labor can adversely impact accessing disability benefits. She says, “For one, [information you share with doctors] goes in your medical record and those are accessible in things like disability cases.” This is problematic because courts and case administrators tend to view sex workers unsympathetically; also because receiving already meager disability benefits is contingent on a determination that you are unable to work.

Sex work, as under the table income, is often good for people on disability because it doesn’t count against their benefits, like babysitting, housekeeping, or other ways people supplement the payments that fail to amount to a living wage. But if you tell your doctor you do sex work, you're admitting you have a source of income. That could tip the judge off that you’re violating your eligibility.

In other words, if you tell your doctor that you are a sex worker and the judge reads your medical charts where you admitted to working, (sex work is a job!) the judge can determine that you are not qualified for disability benefits—where one of the main stipulations for qualification is your inability to work.

"You have to have your guard up and you just can’t trust that they have your best interest at heart.”

In addition to the legal issues, Fiéra has experienced fetishization from doctors after disclosing her work in the industry. She says, “You have to protect yourself, especially when you are a sex worker, when you are trans, you have to have your guard up and you just can’t trust that they have your best interest at heart.” She continues, “They treat you like a fetish object, you know?” Indeed, she recounts a story of a doctor chasing her down the halls of the hospital to ask her for dates and acting in other inappropriate and highly sexualized ways.

While something as enormous as the healthcare system can’t be changed overnight, it is obvious that the stigma that sex workers face within it is detrimental to their health. In this regard, individual doctors and practices can take steps to create safe spaces for sex workers, thus improving their health outcomes.

Through her research, Dr. Kislovkiy learned a tremendous amount about how to better serve sex workers and encourages others to do better. She says, “I find myself asking the people around me, ‘If you feel like you’re getting that feeling like "I don't want to give this person my time of day," I would really implore that you investigate why you think that that person just doesn’t deserve your time of day.’ And that then that's a really good signal to understand your own bias and work against it.”

To Adore, it’s simple, “Treat us like fucking human beings because so often we don’t even get that respect, especially street level and survival workers.”

“Treat us like fucking human beings because so often we don’t even get that respect, especially street level and survival workers.”

Rose commented with a similar sentiment regarding doctors listening to their sex working patients, “I think the most important thing is believing people.”

Beyond those intangibles, Knight suggests that doctors can signal solidarity by displaying sex worker symbols. He says, “I mean, having the red umbrella [the recognized symbol for sex worker solidarity] definitely is like, ‘okay, this is a safe space.'”

Fiéra would compile information on all the doctors in her area to give to other trans sex workers, “Literally I had a list of doctors, and I had people contact me and whenever someone would see a doctor I’d be like, ‘how was it?’ you know, 'did you get what you wanted?' and stuff like that, so I was actually keeping this whole list and sending it out to different people in the community.”

Knight takes it upon himself to interview doctors about what their experience treating sex workers has been, while Adore has advocated for her friends in the sex trades when they have trouble navigating the medical establishment.

The fact that sex workers fear disclosing information that would help doctors serve them better, points to a broken medical system that doesn’t serve the most marginalized and vulnerable people in our society.

Dr. Kislovkiy points out, “People’s identities are intersectional; they aren't just Black women, they're many parts of themselves. I think the same is true here for people who exchange sex, they have many identities that they’re presenting forward, so if there are overlapping identities that have experienced marginalization, I think those are also associated with stigma.” 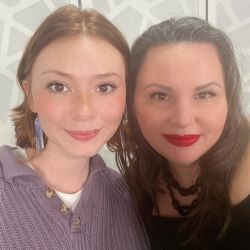 Jessie Sage is a Pittsburgh-based writer, sex worker, and co-founder of Peepshow Magazine. Her writing has appeared in The Washington Post, Men’s Health, Motherboard, Buzzfeed, The Daily Beast, Hustler, and more. Her book, An Unexpected Place, is forthcoming on West Virginia University Press.

Isabella Cowan is a junior at the University of Pittsburgh pursuing a degree in microbiology with a minor in gender, sexuality, and women’s studies. After graduation, she plans to attend medical school in hopes of serving marginalized populations. She is currently working with Sage as Peepshow’s Intern.