by JENN SCOTT
Published: DECEMBER 9, 2021
When social media censorship cracks down on sexy content,  content creators have to get creative. Comedian Jenn Scott shares how she used TikTok to open up and say "AHH".

Over the past 2 years, everyone who said they would “never” have a Tiktok, all of a sudden... they have a Tiktok. TikTok was originally just a bunch of nerds doing cheerleader-esque dances, but it’s so much more than that now. All kinds of hot and sexy people teach us all kinds of hot and sexy information on TikTok. And even though censorship is rampant on every social media app, sex workers always find a way.

I personally have been deleted from Instagram seven times. So, when I first made my TikTok account, I knew I had to be careful and had no idea what I wanted my content on a new platform to look like. As a stand up comedian and an OnlyFans sex worker, I often struggle with trying to show all parts of myself. I wanted to show people I am sexy, funny, and honestly, show that the world is chaos. I want to normalize body neutrality. I want people to not be scared of tits. Little did I know, I would be experimenting with a different body part entirely.

Read: The Ins and Outs of Sex & Social Media

I was inspired a lot of different femme, Non-binary, and trans Tiktokkers. Especially by the "bimbo movement" on Tiktok, led by Chrissy Chlapecka. These self proclaimed bimbos don’t give a shit about the male gaze, they look like Barbie, and they do it for themselves. I love them. I also was getting heavily influenced by popular cosplayers making super cringe content. I love Aviva Sofia, she really piloted the overdone cartoonish lip sync.

For one of my first Tiktoks, I found a sound that I knew was chaotic, gross, cute, and funny. The sound was, “Hey, It’s almost winter, and you know what that means— it’s time to get NIIICE AND WARM in daddy’s foreskin.” I lip synced to that super dramatically in a schoolgirl costume and stuck my tongue out super long at the end of the video. This was the first time I had any significant “views'' on Tiktok. 22k views, which is pretty good for a new account. I continued posting nonsense. Posting on Tiktok feels a bit like throwing spaghetti noodles at the wall, you never know what is going to stick.

One day, I was extremely angry and frustrated with the world, the pandemic in particular was getting to me. I posted a video of me looking like absolute garbage, acne, hair unbrushed, with half my face slammed into a squishmallow plushie and my mouth open and my tongue all the way out. I made a grunting noise and zoomed in on my face. I made the caption “Wow the internet is such a beautiful hellscape”, and this is still one of my most viewed Tiktoks. My comment at the top says “Why is this doing well lololol”. In the 238 comments below, all kinds of dudes were saying all kinds of ridiculous things. Some of my favorite comments include, “What is taste. Do u like it”, “I need you”, and “How is it possible that you even have the hottest tongue on tick talks”. That’s when I noticed a pattern. The pattern is tongue.

Read: How Sex Work Helped Me Love Myself

Tonguetok became an experiment I had no idea I was about to do. I was only making content featuring sticking out my tongue, and anything else I tried to put out absolutely flopped. The more I posted tongue, the more attention I got. My following was rising by the day, and I’m not going to lie--it felt great to be growing organically on a platform. So it began, the weirdest social experiment ever: "How many followers can I get by just sticking my tongue out?"

I was getting so much traction on my Tiktok, Instagram, and OnlyFans. It felt great. I was doing different Tiktok trends with my tongue out, the tonguetok high felt like it could never end. I learned my tongue is long- when I thought it was just regular length. Horny men in the comments were teased by my mouth and drawn to other facets of my internet presence, stand up, podcasting, etc. I gained fans from the absurdity of it all as well as the “naughty” nature of it. I got a tongue scraper, I was ready to insure this thing like Heidi Klum’s legs. Then all of a sudden, the nightmare happened. I realized the followers stopped coming in. 47k followers and a grinding halt.

At first I was upset, but then I realized that tonguetok couldn’t be forever. People were starting to get demanding and profane. “Spitspitspit”, “Busted to this”, “such a good mouthpussy”, and my personal favorite response to someone sticking their tongue out, “Can you humiliate me and degrade me please I’ll do anything you can own me please”.

Read: Why I Lived and Loved Sex Work - And Why Now I'm Ready to Quit

SO YEAH, even if no one reported me--my posts were getting flagged because some people don’t know how to be subtle. Do I think they should have to WATCH THEIR MOUTHS? No. I think they should be able to say that and nobody should get flagged and get their views throttled. Do I have solid enough evidence that it was people spam commenting on me and not something else? Not really. It’s a pretty solid hunch. Just when something gets fun for me on the internet is usually when it gets taken away. I understand less and less what social media corporations are “protecting” us from. I’m certain they aren’t protecting us, but encouraging us to create and pick sides for their profit. But god forbid I stick my tongue out, the world may just end. The real question is, when will we stop having to censor ourselves to appease algorithms?

Maybe it’s just that there are exactly 47 thousand people who like tongue content. That seems low for the entire world on Tiktok, but at least I still have my account. Follow me @meatjenn on Tiktok and everywhere else, come see how the tonguetok journey is going. 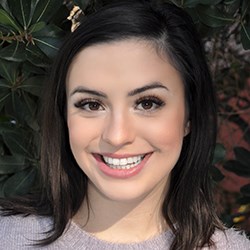 Jenn Scott is a Los Angeles genius, comedian, and philosopher. She performs all over as a standup comedian and can currently be heard co-hosting the podcast TrendPony on the Unpopular Opinion Network.

Want to see Jenn perform in your town? Tell your local venues! She would love to go on tour. Give her money and attention. Follow her at @meatjenn everywhere. Worship her.