A spectrasexual is a term used to refer to a person who is able to be romantically and/or sexually attracted to a wide range of individuals, including those of different sexes, genders and gender expressions - but not necessarily all of them. It is important to note that the exact definition of spectrasexual varies. However, it is noted as being distinct from pansexuality and omnisexuality.

Spectrasexuality is considered to be a sexual orientation, although it is a less common one for people to identify with. Because most people believe that sexual orientation exists on a spectrum, labels for various orientations help people identify where they feel they fit on that spectrum and communicate it to others.

While spectrasexuality is similar to pansexuality, pansexuals tend to say they fall for a person, regardless of their gender, gender identity or sexual orientation. Spectrasexuals, on the other hand, are able to be attracted to people of various genders and orientations, but they are less likely to say the person's label doesn't matter.

Spectrasexuality, as a term, is said to have emerged in 2006. The orientation has its own striped Pride flag. It has a pink stripe on the top and a blue one on the bottom, representing the binary genders at two opposite ends of the gender spectrum. The white stripe in the middle represents non-binary genders. 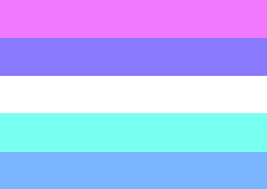 Perspectives
Gay, Straight, Transgender: None of It Should Matter - But It Still Does ... for Now
by BADOINK MAGAZINE

Perspectives
Why Not Thinking About Transgender Issues Is a Form of Discrimination
by MORGAN MULLINS | Sociologist/former sex worker
Have Better Sex!

Perspectives
Gay, Straight, Transgender: None of It Should Matter - But It Still Does ... for Now
by BADOINK MAGAZINE