"That’s pathetic," I said. "I wouldn’t touch that poor excuse for a cock if I had my gardening gloves on; it’s completely useless to me."

I looked up into his eyes to see if this was what he wanted, but he’d been ordered not to make eye contact with me. So he squirmed with humiliation and pleasure all at once, while I marveled at the many things a man can enjoy.

What Is Small Penis Humiliation?

As far as I’ve been able to establish, most of the men who enjoy this fetish have a normal or even larger-than-average sized penis. Bianca’s guest certainly wasn’t undersized.

When Bianca introduced him as, "This sad little creature who thinks he’s a man," I’d half expected to see a small person. She called him "Wee Willie." Of course, that wasn’t his real name.

Got a Penis? Here's How to Have Sex Without It
by Naomi Hutchings

On Top: How to Be a Dominant
by Lily Black and Lex Winters

Wee Willie was enormous. More than six feet tall and heavily built, he towered over both of us. And, yes, his penis seemed in proportion to the rest of his body. (Learn more about penis size in Does Size Really Matter?)

The Truth About "Wee Willie"

I came to understand that for some men, a small penis humiliation fetish springs from a feeling that they’ve always been too big and too intimidating to be treated with love instead of apprehension.

In other cases, a man whose penis size was mocked by a girlfriend or by male friends in his youth can carry a sexual attachment to the memory right into adulthood, and enjoy repeating it so that he can replay the strong feelings it arouses.

Wee Willie’s reasons for wanting to be humiliated in this way were never explained to me. Bianca told me that he preferred not to discuss it, but she believed he’d been bullied about penis size as a boy.

He was divorced after a 12-year marriage to a loving wife who’d accepted his fetish, so now he visited Bianca to explore small penis humiliation because he didn’t have a romantic partner.

What I Learned About Fetishes

She ushered Wee Willie into the room and sweetly told him to take a seat. He obeyed her, settling onto the sofa with his mug of tea. He was naked, while Bianca wore lingerie and I was dressed in my normal street clothes.

"This is the one I told you about," she said loudly to me. "He thinks that’s a penis. Doesn’t it just make you want to laugh 'til you cry?"

As Wee Willie raised his head, she turned on him.

"Don’t you dare look at my guests! You can meet them when you’ve grown a dick, you useless little man!"

To be honest, at first I felt sorry for him. But he really seemed happy. This was what he wanted, what he’d paid for. He’d traveled for more than an hour to be here, and by accepting Bianca’s invitation to join them I was also accepting some responsibility for his experience that day.

I spoke up and joined in the humiliation. For more than half an hour, Bianca and I belittled Wee Willie’s penis, asking him when he planned to "get a real one" and going into harsh detail about its failure to meet our expectations.

I’d worried about Wee Willie’s emotional state and wondered why he wanted to be humiliated like this. I’d felt a twinge of guilt, as though by taking part in his fetish I might be harming him. But it really wasn’t that way at all. He was a normal man, chatting about his new car and drinking a cup of tea with a smile on his face.

Not everyone is as lucky as Wee Willie. He had an open-minded wife and a friend like Bianca to help him bring his fetish to life. That said, having experienced small penis humiliation for myself, I can understand why some women may not like the idea.

Beyond that, though, I’ve seen that like many sexual fantasies, small penis humiliation is a pretty harmless pleasure for consenting adults. If you want to give it a try, maybe start with this charming "Small Penis" T-shirt! 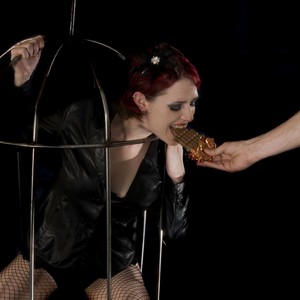