The extremely sensitive glans of the clit can be as small as a gram or so in mass, similar to the weight in most vibrators. The matched masses allow toys to efficiently couple energy into those small and excitable, external nerves.

However, the glans of the clit is just the tip of an impressive clitoral iceberg, a vast structure of nerves that extends up into the pelvic region. The entire complex is a few hundred grams in size.

So, in order to properly stimulate your internal pleasure palace, you want a toy with a larger motor mass. That's why large, powerful wand vibrators, like LELO's SMART WAND 2, have such a cult following. Stimulating that little nub of clitoris outside the body is merely knocking on pleasure's door - bigger toys have the power to shake the whole house.

Read: How to Charm a Clitoris

Size matters. There, we said it. And so does shape.

If you’re looking for some G-spot action, you'll want a toy with some girth and with a curve that will reach that magical, erogenous zone. LELO's GiGi 2 is a great example of this.

For external stimulation, there are lots of options. Some people like pinpoint stimulation, like you can get from a hard little lipstick vibe like LELO's MIA 2. Something like this would pinpoint just the tip of the clitoris. 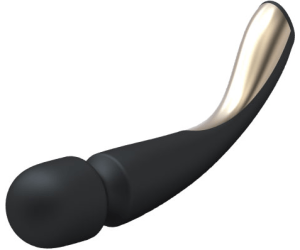 How many vibrational patterns you need or want is entirely up to you. You may find you only need a couple different patterns to send you into an orgasmic bliss, while others may need a lot of variety.

Some wand vibrators keep it simple; many just vibrate at a few different intensities (high, medium and low). Higher-end toys tend to have a lot of different vibrating patterns. For example, the LELO SMART WAND 2 has 10 different vibration settings for you to experiment with!

Scary chemicals are, well, scary. Especially when you think about putting them into your body. After all, the vagina is a delicate mucous membrane, which means it's more susceptible to irritation and is more likely to absorb some of the nasty chemicals that can leach out low-quality toys.

A little bit of this platinum will interact with other precursor chemicals and transform them into nice, clean polymers. For those of you who aren't following the chemistry here, what all that means is that the material is safe for your hoo-ha. And that means you can relax and focus on your happy place.

The final ingredient to any great sex toy is you. You decide what works for you. Every body is different. So, what’s "Ho-Hum" to you might be "HO-LY HELL!" to someone else. It may even take you a few sessions with your new toy to really uncover its true potential. Think of it as orgasm training. That means that sometimes finding something that hits the spot takes a little scientific experimentation (but it's probably one of the most fun experiments you'll ever partake in!).

Now that you can piece together what it is about your special, mechanical lover that sends you off to pleasure town, the next time you find yourself in that dreamy post-orgasmic haze, you can wonder about other mysteries of the universe. Like, "How long as that spot been on my ceiling?"