How I Discovered That Sex Isn't A Vice - It's A Liberation

by AMY ROBERTS
Published: JUNE 21, 2016
Sex is so often portrayed in society as a negative, as a vice. In reality, sex is very much a liberation.

The official word on "sex" from all the main authorities in my life (namely, school, family and, of course, television) was that it was dangerous. Aside from an hour long class in which my classmates and I watched a sad 75-year-old woman peel a condom onto an over-ripe banana, we received a severe lack of information about sex and an abundance of warnings about it. Like most teenagers, the few educational messages regarding sex I received wrapped the act up in moralistic barbed wire; it could ruin your life, hurt you, destroy you, drive you insane. It could even kill you. To my rebellious teenage mind, sex sounded blissfully dangerous and, as a result, I became instantly obsessed with the threat of it.

I Saw Sex as a Vice

Like many other vices that I was taught to avoid, usually within the same breath, sex was presented as a method of self-destruction. Like drugs and alcohol, it was something that could become tremendously harmful when done irresponsibly. That made it all the more alluring to me. The truth is that there was a morbid glamour to being wild and out of control. I was irrevocably infatuated with obtaining those experiences for myself.

The very notion that you could truly lose yourself with another person in the same way that alcohol could spin you off your axis or that drugs could open your mind was fiendishly attractive. I craved experimentation, annihilation and validation, and sex was one of the many “vices” I chose as a vehicle to deliver those experiences to me.

However, I wasn’t completely reckless in my sexual exploration. Although I was eager to explore my sexuality and enjoy new experiences, it’s important to point out that I always did so safely. I maintained buddy systems to protect myself and my friends when I was drinking, and wouldn’t even entertain a man’s sexual advances unless he was willing to use a condom every time. But, truthfully, although I was protecting myself physically, my mental well-being got dragged through the ringer.

Like the hangovers that followed a heavy drinking session, sex provided its own debilitating aftermath, bringing feelings of vulnerability, severe loneliness and even heartbreak. Since sex had been presented to me as a toxic influence rather than the positive, pleasurable act that I would discover later in life, it became tarred by destructive impulses. Sex stopped being about having fun, sharing an experience with another person, or even achieving any kind of pleasure. It became just another way to express my melancholy and ultimately, hurt myself.

Fortunately, with maturity comes insight. I soon grew up to discover that I’d been using sex all wrong. The sheer fact that I used sex instead of simply engaging in it shows the volumes of passivity with which I endured the act with people I didn’t particularly like or even really know that well. Sex had become worthless because I didn’t respect the people I was sharing it with. After a while, I didn’t respect myself much for using it in such a way, either.

I’d made the mistake of thinking of sex as a disposable commodity, like a bottle of liquor that could be drunk, enjoyed and emptied before being tidily disposed of and forgotten about the next day. It just doesn’t work like that. Sexual experiences can imprint on you for a lifetime and, as such, they demand a certain level of control - control that wild abandon and blackout drunk simply can’t provide. By treating sex as a method of destruction, I was limiting myself, my experiences and my capacity for growth.

Still, I did grow. As I grew, I discovered that sex isn’t a vice, but a liberation. It’s an extension of the love you have for yourself, for other people, for life and for pleasure. When approached with pure, positive and safe intentions, it becomes stripped of all the threat that women are often taught to expect from it. By accepting the idea that sex is dangerous and harmful, we’re continuing to support and accept a narrative that women couldn’t possibly ever enjoy or explore their sexualities without in some way ruining themselves or their lives.

It also plays on the archaic idea that women should be submissive when it comes to sex, and that as a result there’s a certain amount of deliberate victimization performed in the act. As a teenage girl, I definitely fell for this falsehood and internalized it, not realizing that my wild attempts for freedom where actually holding me down.

By all accounts, adults still aren't doing a great job at delivering information about sex to younger generations, and we do little to remove the stigma surrounding the topic by refusing to talk about it openly, honestly and positively. Sex should no longer be taboo. It shouldn’t be fenced off by extreme warnings or sullied with shame; it’s a topic that should be normalized and even introduced to young people at a much younger age than is currently the norm. We need to continue to provide an open dialogue about physical sexual safety and protection alongside more complex ideas such as consent and the emotional and mental ramifications of sexual intimacy.

If we continue to unfairly place sex within the same shady vice-culture that alcohol and drug abuse can fall under, then we’re only continuing to present sex to young women as a perfect opportunity for self-abusive rebellion. It's actually the complete opposite. Let’s teach young women about positive sexual experiences, about the significance of orgasms, and about the tremendous, complex wonder of their own bodies. Sex shouldn't ever be dangerous, but misinformation about sex definitely is. 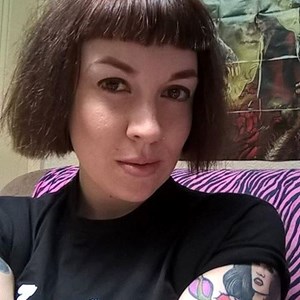 Amy Roberts
Amy Roberts (a.k.a Alabama Roxanne) is a writer, blogger, and musician based in Liverpool, UK. She’s the co-founder and co-editor of the feminist pop culture blog Clarissa Explains Fuck All and is also an entertainment writer for Bustle. She was featured on a panel of David Lynch experts at a Northern Film & Media event in early 2015, and is also the bassist for crust-punk band Aüralskit. Her blog ‘I Never Knew You Were Such A Monster‘, fiction and non-fiction about the horrors of everyday life, was shortlisted in the Blog North Awards for two years running. She is currently working on her first poetry collection exploring the mythologies of the Final Girls of horror.
Full Bio
In The Kinkly Shop
Visit The Kinkly Shop