by KALEB COVE
Published: DECEMBER 30, 2015
Simple touch can feel so good, it'll get both of you hot and bothered.

Most of us have probably given or received an erotic massage at some point. (And if not, put that on your list of sexy resolutions for 2016!) What may have started as an innocent back massage could quite happily (if not quickly) lead to a completely different ball game. Sometimes, sex is on the agenda to begin with, but simple touch can often feel so good that it gets both of you hot and bothered in a matter of seconds - and that's before you've even hit any of the typical erogenous zones. In fact, there are a few places where you can (and should) touch your partner if you want to heat things up. Here are a few that you - and he - may not even be aware of.

Huh? OK it’s not as complicated as it sounds. Locate it by looking for the triangular shaped bone at the base of his spine, in between his hips (or the back of his pelvis).

Why He'll Love It: The nerve endings here are linked to the genitals, so stimulating this particular pressure point should make him feel more than a little something down there. Plus, the nerves located here can trigger the parasympathetic nervous system, which has a lot to do with relaxing and having an orgasm in the first place!

Before you run sideways at the thought (or think he might too), keep this in mind that the brain receptors responsible for dealing with genital function are located very close to those that deal with your feet. Applying some pressure to the top of the arch in each foot can help boost blood flow throughout the body, which is always a good thing when it comes to getting sexy. Applying pressure to the bottom of the arch, heels and outer heels stimulates receptors related to the prostate and erotic zone. Maybe you don't have a foot fetish, but this connection helps explain why so many people have a thing for feet! (Read more about it in A Heel-to-Toe Look at Foot Fetishes.)

Why He'll Love It: Reflexology teaches us that pressure points in the feet are linked to bodily function, including sexual function. Plus, our feet often get left out of the action, which can make a foot massage feel extra special and sexy.

Look for that crease where his butt meets the top of his thighs. It’s a sensitive area that's often overlooked. Try gently running your fingers down this crease and don’t be afraid to use your tongue. Then use your hand to stroke over the area and give him a light slap on the bottom of his cheek.

Perspectives
The Power of (Non-Sexual) Touch
by ROBIN ZABIEGALSKI 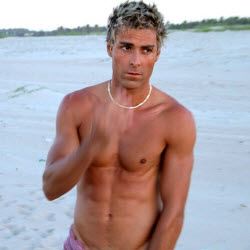 Kaleb Cove
SEX is such a simple three letter word. So why does everyone make it so complicated? Sutra aims to draw on the basic notion of sex being just another crucial part of a total sum of what makes up a healthy and happy individual.

Sutra is all about educating and helping to establish a positive sexual identity (PSI). Because a PSI contributes to a great sex life, and life’s too short not to make sure that every last playdate is a good one!I’m Kaleb and this is MY Sutra!
In The Kinkly Shop
Visit The Kinkly Shop