Sexy Scents: Why the Nose Should Be Considered a Sexual Organ

When it comes to sexual attraction and arousal, your mind might leap to a lover's body, or touch. But there's one element we often forget: smell. In fact, smell is one of the most visceral elements of sex. We often call it chemistry, and when it's just right, it can travel to brain like a lightning bolt, sending the unmistakable signal of attraction. The way we smell is determined by our genes and our immune system, which means that we all have our own, personal chemical signature. It is this that helps draw us to those who are most compatible with us (at least physically). Our sense of smell can signal when a woman is ovulating. It can tell us whether a potential partner is good genetic match. It can even tell us whether a partner is happy or sad, or whether someone has just had sex. And it plays a huge role in desire, arousal and sexual memory. Here we'll take a look at how smell works and, of course, how it relates to sex.

The Science of Scent

So what happens when we smell something? Smells are processed by the olfactory bulb, which begins in the nose and runs along the bottom of the brain. Our sense of smell is unique in that the olfactory bulb has direct connections to the amygdala and hippocampus, areas of the brain that are involved in memory and emotion. Visual, auditory and tactile cues do not pass through these areas. Have you ever smelled an old lover's perfume and been transported right back to her bed? This has to do with the way our brains are wired, and it's why smell, in particular, can trigger such vivid memories and emotions. When you combine this with the growing science around pheromones and their subtle effects on our perception and behavior, it also explains why the combined smell of a certain soap and cologne and body odor can smell like more than, well, soap and cologne and BO. It smells like him.

If getting a whiff of your first sexual partner's perfume sends you straight back to high school, it's easy to understand how other smells can create sexual signals in our brains as well. In 1994, Dr. Alan Hirsch studied the effects of certain odors on male arousal. He found that the smell of cinnamon buns elicited the greatest increase in penile blood flow. In 1995, Hirsch ran another study using combinations of scents and found that a mixture of pumpkin pie and lavender increased penile blood flow by an average of 40 percent. In 1997, Hirsch tried several flavor combinations on women and found that a combination of Good & Plenty candy combined with cucumber or banana nut bread increased blood flow to the vagina. Women also responded well to the smell of baby powder and chocolate.

Now, a pumpkin pie or cinnamon role is hardly the smell of a hot, sweaty lover. But this crossover is actually what makes our sense of smell so interesting. Because smells are so closely tied with memory and emotion, we tend associate certain smells with feelings. Researchers theorized that many of the smells that men and women responded to were associated not necessarily with sex, but with positive feelings or relaxation, thereby stimulating increased arousal. This works the other way too: What we're smelling during a great sexual experience can affect how we feel about that smell - and determine that smell's effect will have on us later.

The Smell of Sex!

Great sex is a truly multisensory experience. The best lovers are always looking to increase the intensity of those sensations for their partners. That might mean introducing sensation play, playing sexy music (or making sexy sounds!), or massaging your partner with scented body oil. 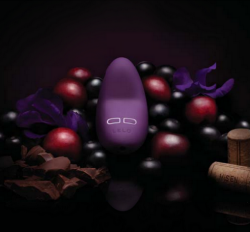 LELO's come up with an interesting idea here as well; today, they're releasing a scented version of their well-loved LILY vibrator, LILY 2. LILY 2 comes delicately scented in Bordeaux and Chocolat, Rose & Wisteria or Lavendar & Manuka Honey. Oh, and with twice the power of the original LILY, LILY 2 really is designed to satisfy all your senses. When you understand the science behind smell and how it triggers our deepest emotions and memories, LILY 2 is actually a pretty interesting concept. Once you associate one of these smells with an amazing evening with a lover, for example, the smell of that toy can bring you right back to that experience. That might be a really nice addition when when you set out to play with LILY 2 on your own. The scents LELO has chosen also have some evidence behind them as aphrodisiacs, particularly lavender and chocolate. Plus, adding the element of fragrance simply opens one more avenue for increased sensation and pleasure. And isn't that what great sex is all about?

Our sense of smell is often overlooked when it comes to our sexuality, but it's actually one the most important components of those sexy memories we never want to let go of. If you've never added a sexy scent to your play, maybe now's the time to tap into this sense - and perhaps another layer of pleasure.