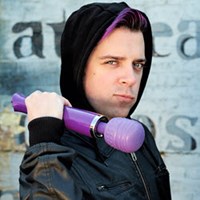 Lucas Brooks, also known as the Intellectual Homosexual, is a Boston-based writer, educator, and performer. His blog The Intellectual Homosexual has been named one of the top 100 sex blogs on the web by four different websites and magazines, including STDCheck.com, Between My Sheets, Kinkly, and Glamour Brazil. Over the last seven years he has traveled the continent with his one-man shows "VGL 5'4" Top", "Cootie Catcher", and "Exit Through the D*ck Shop". As a sex educator, he has presented at Dark Odyssey events and Catalyst Con, and at numerous colleges and universities.

When It Comes to Sex, There is No Such Thing as 'Should'

Between the sheets, 'should' ought to be considered a bad word.